The East Gonja district in the Northern Region is one of the pilot districts for the Triple-S project in Ghana for the past six years. The project officially ends in November 2014.

The East Gonja district in the Northern Region is one of the pilot districts for the Triple-S project in Ghana for the past six years. The project officially ends in November 2014. The Documentation and Communication Officer (DCO) of the project visited the district to document impacts of the project in the district. He had an opportunity of having a one-on-one with the District Coordinating Director for the district, Abdul Karim Yahya Iddrisu, to talk generally about the project. 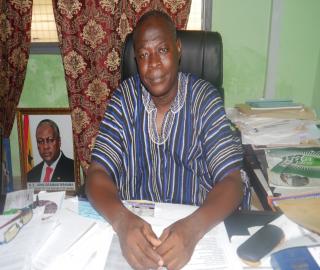 For the purposes of ease of recognition, we will represent Mr. Abdul Karim Yahya Iddrisu with AKYI, and DCO Victor Narteh Otum with VNO.

Please read the full interview below:

VNO: Sir, can you please identify yourself by your name and your position at the District Assembly?

AKYI: My name is Abdul Karim Yahya Iddrisu, I am the District Coordinating Director for the East Gonja District Assembly of the Northern Region.

VNO: Can you give us an idea of the water supply situation in your district before the Triple-S project?

AKYI: The water supply situation in the district before Triple-S intervention was a bit difficult for us. Our district is a district where you will find the water table very low so interventions which came in the form of boreholes, were only successful in places where the drilling went deep down. This meant only a few of our facilities were delivering water. This put pressure on these few facilities resulting in facility breakdowns, especially the boreholes. Places where the water table was so low to drill a borehole were having access to water only through surface water systems.

Even though Salaga is said to be the community with the highest density of wells in the country, the wells, during the dry season all go dry, it is only in the dry season that you have water in those wells. And for the mechanized ones, they were breaking down very often, we did not however have readily available information on the breakdown rates to inform remedial measures and we did not also have area mechanics available to work on those that we knew, and that has been the situation for most of the period.

AKYI: When Triple-S came around, they conducted a baseline survey and we got to know the number of hand pumps, pipe Schemes, limited mechanised boreholes, water kiosks and the amount of Ghana Water Company service schemes that we had in the district. That was the information Triple-S gave us. We did not have this information in the district before the baseline survey.

VNO: How useful was this information to the district in its quest to provide adequate water supply to all communities?

AKYI: After the collaboration with Triple-S in conducting the baseline and subsequent surveys, we now have reliable data that we could use to tell the water supply situation in the district. We are able to know the functionality status of facilities in the district at each point in time. This helps us in providing reliable information on our water situation to partners in the district who wish to work with us to remedy the situation. 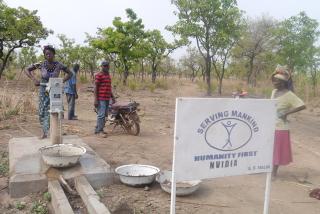 One of such partners was the Ahamadiya Muslim Mission's NGO called Humanity First, whose interest was in the water supply. They came down to discuss possible ways of collaboration with the district in water supply. We gave them the number of hand pumps and boreholes-those that are functional and those that are not. They showed interest and based on that came down in 2013 to rehabilitate 11 of the broken-down boreholes in the district.

VNO: What measures is the District putting in place to sustain the service monitoring exercise?

AKYI: Information gathered from the Triple-S service monitoring exercises has become part of the database of the water sector in the district. Any NGO or partner that comes around willing to go into the water sector, we have ready available information for them. The district is coming out with its water and sanitation plan for 2014 with budget lines in that respect. We are also reviewing our medium term budget plan and this information is being incorporating into the water aspect.

VNO: How much was allocated in the budget for the monitoring activity?

VNO: Will you consider the monitoring exercise useful, and why?

AKYI: The collaboration with Triple-S has been very useful to us as a district assembly because, as indicated earlier, we now have reliable access to information that we can give out, just by the click of a button.

For instance, the Member of Parliament for this area came around and wanted to support the district in water delivery. We gave him the information. He sent some mechanics down to work with our officers here on a number of boreholes which were not functioning. Water delivery was restored to the affected communities.

Also, New Energy, an NGO also conducted a baseline survey in the district in respect of water and sanitation situation and it was the Triple-S information from its monitoring that was used as their reference information.

VNO: What do you mean by the information is available?

AKYI: What I mean is that, when you ask any information on water supply in the district, we have that information readily available. For instance, if you want to know the number of facilities available, how many are functional or not functional, in terms of stand pipes, boreholes, hand pumps, water systems and pipe schemes, all that information is available.

VNO: This information has to be regularly updated, how does the assembly plan to go about this to ensure it stays relevant?

AKYI: The assembly has planned to continue to undertake this exercise even after Triple-S activities in the district. The district assembly staff in charge of water and sanitation, who assisted Triple-S to undertake the monitoring exercises, are all our officers. This tells you that we have institutional memory. One of our officers who was involved in the monitoring process from the beginning is now being used as a resources person by Triple-S for the scaling up in other districts. You know, when the East Gonja District success stories started coming up and the project needed to upscale, he was the one that was used to go and train the other districts that were benefiting from the scale-up. There are also other officers who were involved in the exercise. What we are planning to do now is to acquire the android phones so that we can continue the service monitoring on our own when Triple-S finally exits.

VNO: How different was Triple-S in the district as a software project as against hardware projects that people are usually used to, and how did you manage that?

AKYI: It is true; people are usually used to hardware projects that provide tangible facilities. However, though the hardware provides the facility, what we did with Triple-S, as a software project, gives us the opportunity to get to these facilities. Because, when facilities are provided, there is the need for follow ups to find out whether they are functioning and delivering water to the people or not. It was the case that until the community comes around to report that the facility is not functioning we wouldn't know. But in situations where people had access to unimproved water sources, they will never report the breakdown. But with this service monitoring, we have current information on the functionality of the facilities, on reliability, crowding or not.

Also, based on this collaboration with Triple-S, when it came out that some of the facilities were breaking down for a long time, partly because of limited numbers of area mechanics in the district, SNV collaborated with the assembly and trained area mechanics for each area council, so as at now every area council has at least one area mechanic.

VNO: One of the findings of the service monitoring was that there were a number of facilities without management teams, what is the assembly doing about that situation?

AKYI: That information was given out when we were to benefit from a World Bank facility called Sustainable Rural Water and Sanitation Project. We gave that information out to the consultants who came and currently management teams are being put in place for those orphan boreholes that were identified in the service monitoring.

So it should not always be the case that we look forward to hardware projects but also software projects that will help ensure that the hardwares are working as expected. In the past we have always looked forward to the provision of facilities through hardware projects but now the focus is shifting where we need to make more considerations other than the provision of the facilities-like how do we ensure that the facilities provided continue to work for the entire duration of their lifetime, what are the measures we need to put in place to ensure this? These are all relevant questions, and I believe Triple-S has helped to draw our attention to these issues which people didn't think of or were ignored in the past. So I will say, we appreciated Triple-S so much, though it was a bit difficult to understand from the beginning, it became clear to us and we appreciate very much the opportunity to host Triple-S.

VNO: Any lessons learnt that can be shared with any other district that will be up-scaling of Triple-S, anything that should have been done differently?

AKYI: Ok, I think that the lessons we have had from the Triple-S collaboration, we have shared them with other districts who were beneficiaries of the scaling -up. However the situation in our district is such that access to water is difficult so the experiences may differ.

VNO: Any final words on Triple S activities in the district?

AKYI: Well, I will say, our collaboration with Triple-S has been very useful to the district. We have made sure that, even after Triple-S, the lessons from Triple-S will continue to be useful and stay with us even when the project ends. It is therefore good news that our officers were fully involved in the collaboration and they have the technological know-how and they are those who will take over from there to make sure that the information continues to be relevant.

We will wish to further collaborate with Triple-S in future, possibly as a hardware project to provide more facilities to the people of the district to improve water delivery. Nevertheless, should any Triple-S project come back in future in any other form, it must try and come back to the East Gonja District, because we have benefited a lot from it.

On a scale of 1-100, I will rank Triple-S activities in the district at 80. This is because of the good works and innovations that they have brought to the district, which has also contributed in sending the name of the district far or I will say, internationally.

VNO: Thanks very much Mr. Abdul Karim Yahya Iddrisu for the opportunity.

AKYI: Thank you too for coming.