How can an NGO survive as a small business? 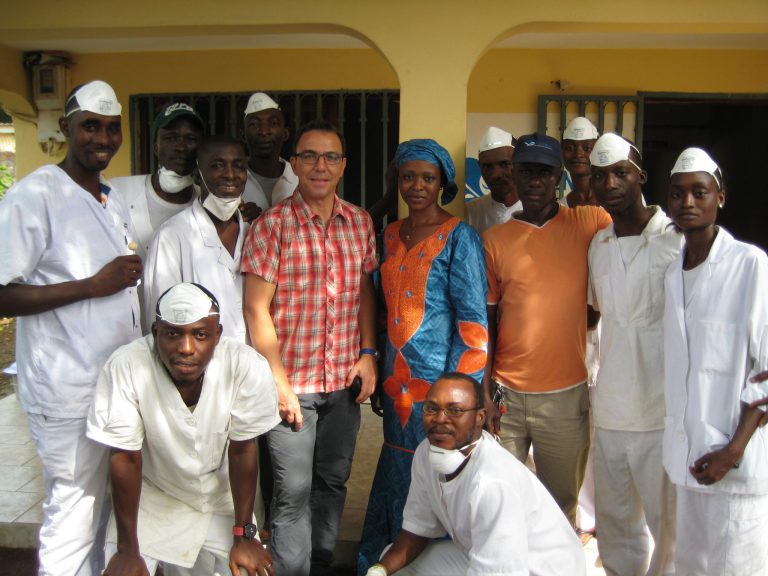 Can you introduce yourself?

My name is Pierre-Gilles Duvernay, I have worked for Antenna Foundation since 2010. At the moment, I am water and hygiene programme manager for the French speaking African countries and technical adviser for the WATA technology. I work primarily with programmes in Guinea Conakry, DR Congo, Burkina Faso and Rwanda.

Can you tell us a bit about the programme in Guinea Conakry which is your main programme? What are the successes and challenges you had to deal with?

In 2010, I started working with Tinkisso, a small NGO working on WASH in rural provinces. After a successful pilot project with Antenna’s WATA technology, the Ministry of Health and UNICEF funded an expanded project to fight cholera. For this project, Tinkisso became a chlorine producer and moved its headquarters to Conakry. The production was a big challenge because they started with a small set-up in rural provinces and it was my task to assist them and strengthen their capacities within the organisation. I helped them with their accounting systems, business management and human resources. This was all very important in order to get started. Only after that could we work on the production. At that time, I was in charge of research and development at Antenna and we experimented with starting a small chlorine factory. Antenna Foundation and Tinkisso tried out various production processes and I went on mission with them several times. A new chlorine factory was set up which progressively increased its production and was eventually able to produce 5 million bottles per year.

This capacity was hugely important because there was a big cholera outbreak in Guinea at the time. All imported products were out of stock so there was enormous pressure to produce more and more bottles of chlorine urgently. Therefore, finances needed to be in place and quality control organised, distributors needed to be found that could distribute the bottles throughout the whole country. It was a particularly big challenge to get the bottles to the remote areas.

What kind of influence did this work have on the government and the politicians?

In the beginning, when we worked in the rural provinces and then moved to the towns and the capital to sell the chlorine, we worked closely together with representatives of the Ministry of Health. We had an excellent working relationship with the Ministry. However, at the moment they noticed that our work was profitable we were disconnected from the Ministry and had to work on our own.

In your role as technical adviser, what exactly do you do?

As technical adviser, it was really innovative to help develop a production site for so many chlorine bottles. Realising that this would have a huge sanitation impact, it was essential that the product was of excellent quality. So we had to set up and equip an Antenna-Tinkisso laboratory, train the laboratory staff, and train the technicians for both quality control and stabilisation of the product. The product had to have a shelf life of 1 year so that it could also be sold to rural areas. A lot of research had to be done to make this feasible.

The staff had to have proper protection because they were working with chemicals during the stabilisation process. We engaged engineers to build reliable ventilation systems to prevent the staff from inhaling the potentially toxic by-products. Also a system had to be set up that would take care of filling 5 million bottles, which before had been done manually. So Antenna Foundation found a machine that filled the bottles mechanically, quickly and efficiently. Before many young unemployed people were doing this job and now a machine took over their work. It is very unfortunate that when you are trying to speed up the production process, that this has consequences for the staff and you have to dismiss a number of people. That is a very difficult decision. This is what happens when you are trying to work in a cost-effective way. At that moment, the NGO decided to set up a limited company next to its other activities. It took some years to set this up, but now there is an independent NGO that will be financed by a limited company.

Recently there was a Safe Water project meeting in which you participated. What are your main take-aways from that meeting?

The most important one is that when you start with the mentality of an NGO it is sometimes difficult to put a business hat on. That process takes time. An NGO is practically always dependent on finances from others and has to account for those finances. When you become a business you still have to balance the books, else you will not survive. What I want to say is when you want a safe water business to succeed you have to make sure that everyone takes up his/her responsibility, also the government:

The large-scale commercial development of drinking water requires a hybrid model enabling collaboration between the public and private sectors. The government and international NGOs will have to do social marketing by running major public education campaigns on health and hygiene and the private sector has to make the products. However, the main required behaviour change will have to come from government.

Do you have tips for the businesses?

You have to do it step-by-step. Be very careful with investments because at certain moments big orders can come in due to outbreaks of cholera or Ebola. All of a sudden, organisations such as UNICEF and MSF put in big orders and, you need lots of cash for the production. Therefore you need to have working capital dedicated to your production only because you will get into trouble when you start buying office products or cars with your working capital.

This is the moment you need to economise because these events are cyclic, one year you have a big order because of an epidemic, which is usually related to a specific season, and the next year you do not. The big challenge is how to deal with a product that is perceived as being mainly linked to big epidemics and how you turn it into a consumer product that can be used every day, such as toothpaste and other products related to hygiene.

This article is based on an interview by Vera van der Grift of IRC with Pierre-Gilles Duvernay of Antenna Foundation during a stakeholder workshop in Nepal, September 2017.