Where is the money? Financing Uganda’s WASH, environment and climate change

Walter Ogwang is testing the pump at St Katherine Secondary School for girls in Boroboro, Adekokwok Sub-county in Lira and he is not impressed. He counts 17 strokes before water starts to flow, and after a few seconds pause a further 11 strokes before it begins to gush again.

“This borehole has a problem; a leakage,” he explains. “When the borehole is OK, I only have to pump three times and the water comes out, but this one needs to be repaired.”

As a member of the Lira District Hand Pump Mechanics Association, one of his functions is to visit water points and check whether they are working. This pump is not only vital to the school, but is a main source for a nearby village and Ogwang expects it to cost 20,000 UGX (US$ 7.75) to put right. He promises to return the next day to talk to the members of the water point committee. “When they agree to pay me I will come and repair it. It will take just five or six hours.”

Ministry backs associations in every district

The functionality of water points is at the top of the agenda for local Government in Uganda, after a 2011 study found that scarcely half were fully functional. Many mechanics were giving up their work because of the unreliable work flow and unreliable payments.

The Joint Sector Review meeting for 2011 backed a plan to promote Hand Pump Mechanics Associations throughout the country. The Ministry of Water and the Environment had noted that in Kabong District where an association had been formed, the functionality of water points rose from 20% to 96% in just four years.

In Lira, Walter Ogwang and his colleagues are no longer isolated operators waiting for a community to diagnose its own problems and call them. Mechanics are better organised, more proactive and the associations are vital to keeping water flowing in rural areas. The associations provide status, organisation, training, a check on standards and quality and the possibility of contracts.

In Western Uganda, the Kabarole District Handpump Mechanics Association was formed at the request of the District Water Officer in 2011. Up to that point, the water users’ committees at each individual water point had no real idea who they should call or who was well trained. Vincent Nyakoojo the chairperson of the association says: “Water users would get mechanics from other sub counties and some of them would come and pretend to repair the pumps but would take the parts and sell them somewhere else.  Now these bad practices have stopped.”

His colleague Sylvester Katesigwa who works in the Kicwamba sub-county agrees. “In the old days especially when someone was not fully trained, these mechanics would spoil the water source. They would put in parts that were not even necessary. Now communities get a better service because we are organised. Our phones are registered at the sub-county and they call us.”

Katesigwa says: “The Hand Pump Mechanics Association has really made things better. We have come to know each other and to share each other’s problems. Now even the government has recognised us.”The Hand Pump Mechanics Association constitution says that its aim is “championing access to clean, safe and adequate water for a healthy community”. Duties cover repairing boreholes, ensuring a supply of spare parts and convincing the community of the need to collect water fees.

Associations are community based businesses

Associations are registered not only as community based organisations (CBOs) but also as companies, which allows them to bid for contracts. The Kabarole association has 34 members and has won two large contracts. The district water office committed five million UDX (US$ 2,000) to repairing the gravity flow system in Buheesi Sub-county. It is also commissioning the association to start replacing the narrow diameter pipes with larger ones that will give a stronger flow to communities. At present 13 taps serving 1,000 people receive no water at all.

Martin Watsisi, Triple-S Learning Coordinator in Kabarole District, says the sector could not afford to lose mechanics who gave up their jobs. “Over a number of years the government has been training hand pump mechanics based at the sub-counties but that has not gone on well for a number of reasons. When individual hand pump mechanics operated in isolation at the sub-counties, many of them fell away because of lack of contracts or engagements, or because of the failure water user committees to raise the costs of paying them. Others ended up with vices like vandalising water sources and selling parts to other areas.

“A district based association is helping to resolve some of these vices. It will regulate the individual hand pump mechanics in the sub-counties, support them in terms of capacity and also to find other useful jobs so that the rate of the turnover is cut down. This helps government to end what I see the wastage of resources in terms of training hand pump mechanics every year.”

The associations strengthen links with sub-county water and sanitation boards and with the community. “Because a sub-county is so big not all individual water user committees know who the hand pump mechanic is or where to find him. Very often when the water systems break down the communities are stuck. The hand pump mechanics association obliges its members to do surveys and therefore get in touch with the communities and do repairs.”

The name “hand pump mechanics association” is something of an anachronism. Daniel Okot, chairperson of the Lira Hand Pump Mechanics Association, points out that members repair many kinds of water points, as well as constructing water tanks and platforms for pit latrines. 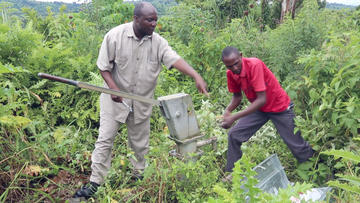 “Okot says that the association eradicated problems such as communities being overcharged for the work, and the committees know who to call. “Accessibility is good now because the association has made the communities well-versed with the hand pump mechanics and it is easy to call them.”

He also says that hand pump mechanics are acquiring new skills through training provided by partners like Divine Waters, SNV, and Triple-S Uganda.

Lira District provides mechanics with tools to do their jobs and with bicycles so they can travel. Jimmy Otim, assistant water officer for Lira District, is asking the Lira Hand Pump Mechanics Association to develop its business model so that they can buy in and store spare parts in the district, reducing costs and delays. “The community buys the spare parts and brings them and tells the hand pump mechanics to do their work. The challenge is that in Lira we have outlets only in the town. For people who live 40 or 60 kilometres away it is really expensive to by spare parts and take them back to their villages. If the association can open outlets at those points, it will really reduce the costs and improve the HPMA as well.”

Who will protect the consumer?

As the associations become more business-like who will protect the consumer, since associations will regulate the rates? In Lira, Jimmy Otim says that local government members and the water point committees will insist on fair rates.  “When the training is by the (local) government and the tools are provided by the government you cannot charge as if you did all these things yourself. They should not overcharge and they should also not be too ‘lenient’ (undercharge).”

He says that councillors and other community representatives would object if the prices were too high.

In Kabarole, Vincent Nyakoojo is developing business plans to attract more customers and wants to double the number of hand pump mechanics in each sub county from two to four.

“We are expecting to get more jobs in the community because we are mobilising the community to pay for water and there will be more rehabilitation and repairs. If we have only two members in each sub county we cannot do that work.”

In Lira, the chairperson Daniel Okot is equally optimistic about the future. “Sustainability is moving on well. In five to ten years we think the sustainability of water sources within the communities will have reached 90-95%.”

Where is the money? Financing Uganda’s WASH, environment and climate change