First in the series of Sanitation Challenge zonal workshops for Metropolitan, Municipal and District Assemblies was a huge success.

The first in the series of three nationwide Sanitation Challenge zonal workshops for Metropolitan, Municipal and District Assemblies (MMDAs) which took place in Tamale on November 24, was a huge success.

The zonal workshop followed the successful launch of the Sanitation Challenge for Ghana, a contest for MMDAs to reward excellence in urban liquid waste management, by the government of Ghana on this year's World Toilet Day, November 19.

Opening the workshop, Hon. Dr. Stan Kadingdi, Municipal Chief Executive of Kassena Nankana Municipal Assembly, commended the initiative as a novelty and called on all qualified MMDAs to register and develop realistic strategies to change the current low levels of sanitation. Rex Jakpa, the Regional Environmental Sanitation Officer (REHO) urged the participating MMDAs to show active interest and stand out to be counted.

Mr. Kweku Quansah of the Ministry of Local Government and Rural Development gave an overview of the current state of sanitation in Ghana, stating that the sanitation challenge was one of government-led innovative interventions to enable MMDAs prioritize urban sanitation. He commended the British Government for the support and the 'Ideas to Impact' programme for the concept. 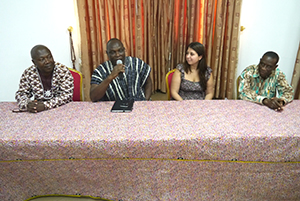 The technical and thematic session to orient the MMDAs on the challenge, entry process, liquid waste strategy development outline among others, were jointly presented by Veronica Di Bella of IMC, UK and Kwame Asubonteng of IRC Ghana. According to them, the contest, which is part of the 'Ideas to Impact' programme, is open to cities, municipalities and districts with a population of more than 15,000 habitants to compete with strategies to improve urban sanitation. The solutions should eliminate open defecation, reduce the sanitation gap between the rich and the poor, and increase access to basic and hygienic sanitation for all.

In a series of buzz group and strategy development group works and reporting back sessions, participants were taken through the process and made to compete in designing strategies based on a case study. The interactive sessions generated lots of questions on selection criteria, where to obtain what data and many more; and responses provided by the project team - IRC Ghana, WHS, Maple consult, IMC and the Environmental Health and Sanitation Directorate of the Ministry of Local Government and Rural Development (EHSD-MLGRD). The workshop was co-facilitated by Ben Arthur of WHS and Prof. Mawuena Dotse of Maple Consult.

According to the project team, the competition runs from November, 2015 to November 2018 under the auspices of the Ministry of Local Government and Rural Development with funding from the UK Department for International Development. And that IRC Ghana in partnership with a Ghanaian consulting firm Water Health Solutions is the national implementing agent acting on behalf of IMC Worldwide, and with support from Maple Consult.

The zonal workshops, organized in three areas across the country, aim to provide orientation and support MMDAs to design liquid waste strategies to bring about significant changes to urban centres and towns. The specific objectives is to create awareness and stimulate interest of eligible MMDAs and beneficiaries in the Challenge Programme; orient MMDAs, potential investors and innovators about the prize design, operational and submission requirements; incentivize and motivate eligible MMDAs to commit and participate in the Challenge; and to create a platform for MMDAs to engage and share ideas and challenges.

The northern zone workshop attracted over 100 participants including district chief executives, coordinating directors, planners from eligible MMDAs; as well as NGOs and the media. The middle and southern zonal workshops will be held in Kumasi and Koforidua on November 27 and 30, 2015 respectively.