"Every day is sanitation day"

Presidential launch of the National Sanitation Campaign in Ghana, the journey towards SDG 6.2.

On November 13, 2017, Ghana’s journey towards Sustainable Development Goal 6.2 (SDG 6.2) gained a massive boost when the President of the Republic of Ghana, Nana Addo Dankwa Akufo-Addo, launched the National Sanitation Campaign (NSC) in Accra to tackle head-on the country’s poor state of sanitation.

“Every day is sanitation day”, the President declared indicating that sanitation is an important part of our daily lives and must be an everyday practice.

“This campaign is not going to be a nine-day wonder. It will run over the entire period of my mandate to ensure that Ghana is clean. I remain committed to this and I am determined to ensure that the job is done,” the President said to the overfilled 1200 capacity Banquet Hall of the State House. Present were Ministers of State, Members of Parliament, Heads of Departments and Agencies, Metropolitan, Municipal and District Chief Executives, development partners, traditional leaders, and media partners. 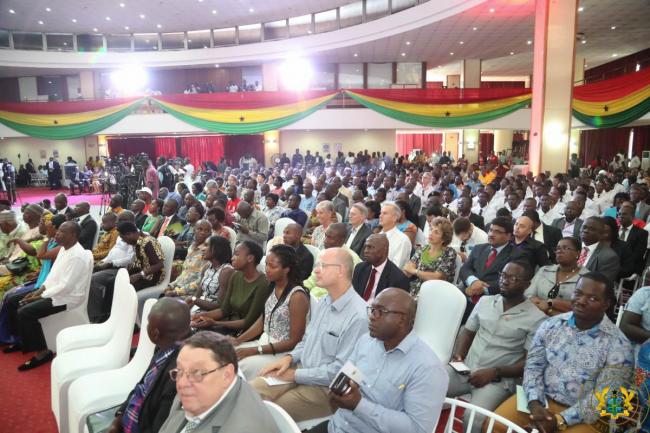 The other presidential directives include: vii) Ministry of Sanitation and Water Resources (MSWR) and Attorney General’s office to set aside a day to try sanitation offenses; viii) The government to adequately resource waste management companies with modern and effective tools for their work; ix) All government departments and agencies to assign two officers, x) Sanitation Marshals and Deputy Marshals, to ensure the compliance to sanitation by-laws; xi) Local government charged to ensure adherence to the one-house-one-toilet policy; and xii) The Evaluation and Monitoring Minister to publish Metropolitan, Municipal, District Assembly’s (MMDAs) sanitation performances quarterly.

SDG 6.2 by 2030, challenges countries to achieve access to adequate and equitable sanitation and hygiene for all, and end open defecation, paying special attention to the needs of women and girls and those in vulnerable situations. This puts enormous responsibility on countries like Ghana where nationwide access to improved sanitation is only 14% (2017 JMP Report) and the MDG sanitation target missed by about 40% (JMP 2015 Update) - one of the lowest covered countries in Sub-Saharan Africa. The presidential launch of the NSC is therefore viewed by many as a key milestone that needs to be detailed out and implemented to the letter.

The Minister of Sanitation and Water Resources, Mr Joseph Kofi Adda, commented on the sanitation value chain, indicating that in today’s waste management context waste has value, but requires other inputs for it to become a resource. According to him, these include: an enabling policy framework, specialised trucks and modern equipment, the right mix of adequate human resources, access to a dedicated credit facility among others. He cited countries like Singapore where only two per cent of waste residue ends up at landfill sites and pledged reforms in the waste management sector to enable resource generation and job creation.

On behalf of Ghana’s Development Partners, a representative of UNICEF commended government for the initiative and proposed three key issues for consideration: sustaining the campaign, funding that should be targeted at the poor who critically need improved sanitation services and key performance indicators to track progress towards impact and results.

The Netherlands Ambassador to Ghana, Mr Ron Strikker, appealed for public support for the campaign through a change in attitude towards waste management.

Vida Duti, IRC Ghana Country Director, who was one of the dignitaries at the launch, shared her impressions:

“The poetry sketch that ushered the President to the launch podium aptly captured our past, present and where we need to go from here. I am excited with the presidential launch of the campaign. However, I think the roadmap of the journey towards SDG 6.2 has only been partly outlined. The enormous task of implementation will require the same level of political leadership, effective coordination, resources to convert the proposed policy initiatives into tangible impact on the ground, as well as a reliable mechanism (with indicators) for tracking delivery, use of services and reporting on progress. I am glad the President acknowledged that government cannot do it alone and did call on all, especially our chiefs and queen mothers, religious and opinion leaders, civil society organisations, private sector operators to rise up to the challenge and help make a difference this time around. We all have our roles to play and IRC will continue to support national partnerships focused on achieving the SDGs.”

The campaign is planned to run over the entire period of the president’s mandate and hopefully the President will monitor the campaign with the Minister for Monitoring and Evaluation as intended to ensure that the goals are attained and the journey towards SDG 6.2 is unimpeded.