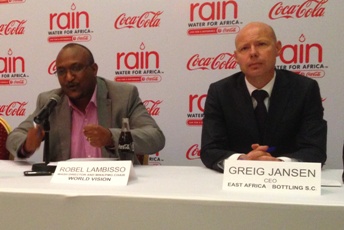 TCCAF is providing US$ 4 million to the project, which is being implemented in partnership with the Conrad N. Hilton Foundation (CNHF) and Millennium Water Alliance (MWA), Catholic Relief Services (CRS), WaterAid and World Vision. The project builds on the MWA’s  existing US$ 13 million CNHF programme that is being implemented in 25 woredas in 4 regions.

The TCCAF project can benefit from the related Multiple Use Services through Rainwater Harvesting (MUStRAIN) pilot project (2011-2013) in Dire Dawa. Funded through the Dutch Partners for Water programme, this project focuses on the exploitation of sand rivers for domestic, livestock and small-scale irrigation through integrated approaches that take account of multiple water needs. The Amsterdam-based RAIN Foundation is implementing this pilot project in partnership with the IRC International Water and Sanitation Centre, RiPPLE Ethiopia, the Hararghe Catholic Secretariat (HCS) and other local  stakeholders.

The launch of the TCCAF RAIN Multiple Use Water Improvements project took place on 12 April 2013 in Addis Ababa, on the sidelines of IRC’s Monitoring Sustainable WASH Service Delivery symposium.