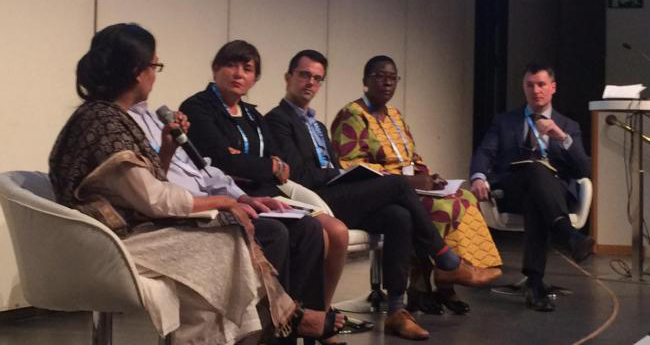 Why are most donors hesitant to fund advocacy? How can organisations position advocacy to make it appealing and essential for donors to support? What role does advocacy play in SDG achievement? These questions were key during the Stockholm World Water Week session: increasing impact through donor-supported advocacy for water supply and sanitation.

Public and private donors who support global development often emphasise measuring direct impact. In the water, sanitation and hygiene (WASH) sector, this means counting taps and toilets and the number of people served. Donors want the impact to be quick and measurable. When it comes to funding the ‘bigger picture’, the system in a country that makes WASH services sustainable, they are often more reluctant to fund it.

To achieve the ambitious SDGs, a focus on the system and advocacy to improve those systems are needed. But with donor reluctance to fund this 'big picture' thinking and action, organisations need to be creative in bringing donors into the mix to fund this work. How can organisations convince donors they should be looking at a broader horizon? What can one do when an impact is not immediately measurable?

This was the focus of the session on advocacy at Stockholm’s annual World Water Week. Development partners Water.org and IRC organised the session, for they believe advocacy could play a much bigger role in achieving SDG6. In the panel are WASH experts from around the world: Jeff Goldberg (USAID), Chris Dunston (Conrad N. Hilton Foundation), Ana Gren (Swedish International Development Cooperation Agency, SIDA), Jane Nabunnya Mulumba (IRC Uganda), and Vedika Bhandarkar (Water.org India). Darren Saywell from AECOM moderates the session.

Advocacy and local programming should go hand in hand, says Vedika Bhandarkar. “Programme work gives an organisation credibility. Advocacy is important to influence a bigger scale than just the district where you’re working in.” Though donors often only fund programme work, the impact of ‘different organisations doing similar things’ could be much bigger if they could lobby together for national change, she says.

Chris Dunston from the Conrad N. Hilton Foundation, responsible for the organisation’s WASH programme, was critical of advocacy for a long time. He designed Hilton Foundation’s programmes and focused on direct outcomes. Just recently he got to understand that, instead of short-term projects, he should be looking at systems strengthening.

“To change something, you have to understand how the system in a country works”, he says. A national system exists of national policy and regulations, and different roles and responsibilities for service providers at different levels. Dunston now believes donors should focus their work on strengthening this whole system. Advocacy is important for that. “I’m a believer now”, he says.

When donors do fund advocacy, how should impact be measured? This is one of the bottlenecks the development organisations agree on. It can take many years before the end result is achieved. Jane Nabunnya from IRC Uganda picked up her ‘advocacy tools’ in university when advocacy still meant ‘waving your fist in the air while being tear-gassed’. Over the years, she learned that monitoring change is essential. "You might not reach your end result", she says. "But in the meantime, your work may have an effect elsewhere. Noticing changes can strengthen your idea that it is worthwhile". 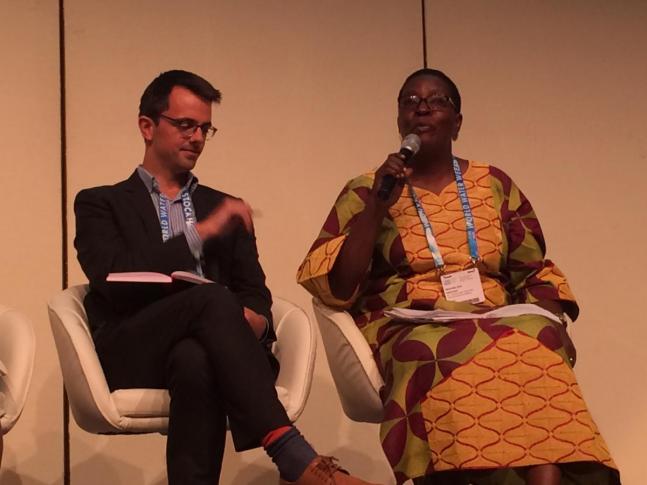 When engaging in advocacy, effect and impact can take several years, agrees Vedika Bhandarkar. For it to be effective, several organisations should join hands. Not all donors like the fact that impact can't be solely explained by their support. But it can be really worth it, she says.

In India, for example, all banks are obliged to give twenty percent of their loans to a priority list. With a coalition of organisations, Bhandarkar tried to get WASH included in that priority list. “This took a number of organisations to cooperate, and several years.” It might be hard to show results in the first years, but when you look at the end result, it is really worth it, she says.

Funding long-term programmes, or advocacy programmes that do not have a direct measurable impact, may cause trouble at home, says Chris Dunston from the Hilton Foundation. “Every organisation has it's board to please.”

Looking at the long-term, and looking back at what’s left of an investment takes courage, says Jeff Goldberg from USAID. In their funding choices, they are aware of the fact that supporting ‘hardware’ is easier than system change.

The Swedish International Development Cooperation Agency does not provide funds for advocacy directly, says Ana Gren. But they do support organisations that work on thematic programmes, such as Menstrual Hygiene Management. In these programmes, there is certainly an advocacy component, she says.

At the Hilton Foundation, it took a lot of influencing by the programme staff until the board understood how important monitoring, evaluation, and learning is – a key element of their new strategy, says Chris Dunston. “Now, the board values the work on building evidence and strengthening systems. It accepts that impact may be less direct, but that it is worth it".