A day in the life of a water source caretaker

Who is taking care of the hand pump, replacing wearing parts, and keeping the service going? 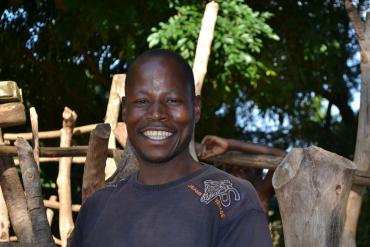 In rural Uganda, different actors make sure that water sources are always functioning and that people enjoy a reliable water supply as close to home as possible. Water source caretakers play a crucial role in the management of water points. What are the typical tasks and activities of a source caretaker?

Owaraga Simon Peter is the caretaker of Kakusi borehole, Onamudian Village, Pallisa district in Eastern Uganda. Simon has been caretaker of this borehole since it was constructed in March 2013. He was nominated by fellow residents to be part of the Water User Committee (WUC), mostly because his house was close to the source. After the bad experience of going without safe water for years, everyone in the village was willing to contribute in one way or another to the maintenance of the borehole. Simon had no hesitation in taking up the caretaker responsibility.

Simon rises early and goes straight to the borehole which is a few meters away from his home. Sometimes he finds fellow residents already waiting. Under his supervision, they quickly sweep around the source, clean the splash apron and the drainage. Then he opens the source which is locked with a padlock every evening at 7.00 pm. There is a chlorine dispenser at the source. He makes sure it is also filled.

After the morning supervision he fetches water for his household and goes to the garden at about 10.00 am. In his absence, other community members continue fetching water while at the same time ensuring good use of the borehole.

Bickering ladies in the queue

Since his home is near the borehole, Simon can see from a distance anything that goes on at the source. Whenever he observes a problem he quickly runs to the borehole to resolve the matter. Sometimes people are fighting. Sometimes children are mishandling the borehole. Other times people are bickering over positions in the queue. Women and young girls constitute the biggest number of people who fetch water from the borehole. Simon may send a child back home if they are the cause of trouble; or talk to the bickering parties to control themselves. Once in a while he settles a fight.

Before they got this borehole, Onamudian residents fetched water from a swamp, about 2 kilometers away. Simon recalls that in those days, most households in the village had a problem with hygiene. Children never bathed. He also believes that there were incidents of water borne diseases, although they didn’t affect his own family. But now, there is general improvement in cleanliness at household level because safe water is accessible. Simon, a father of five, says his children are very healthy and tidy - so are many other children in the community.

Since he started playing the caretaker role, community members have been cooperative and indeed they pay their user fees to the WUC treasurer. As a result, this borehole has remained functional without any major breakdowns, for over two years. He says the district technical staff have also been supportive, regularly coming to follow up on the functionality of the borehole and offer advice.

Although his job is voluntary, Simon says he enjoys it because he appreciates the fact that water is life. He also says that his job has earned him respect among the community members and allowed him to exercise his leadership skills. “I would be willing to serve over and over again,” he says, with a broad smile.

NOTE: Kakusi borehole in Onamudian village, Pallisa district was visited as part of IRC’s efforts to identify and document key issues surrounding O&M of rural water sources. The exercise was undertaken under the Advocacy Challenge, 2015 which was supported by ACRA-CCS. Through this initiative, IRC and UWASNET intend to advocate for increased funding towards O&M of water supply facilities.