This community case study takes a look at the water supply situations in the Logakope Wodome-Gbogame community in the Akatsi District of the Volta region of Ghana.

Introduction
This community case study in Ghana examines how interventions by the Triple-S project through the Community Water and Sanitation Agency (CWSA) to the District Assembly down to the community level has enhanced water service delivery. It is based on a visit to the Gbogame community in May 24 of 2013, during which interviews with water users, a water vendor and the secretary of the Water and Sanitation Management Team (WSMT) were conducted.

Community Profile:  Logakope, Wodome-Gbogame is a community located about 10 killometres from Akatsi town in the Akatsi district of the Volta region of Ghana. The community has about five hundred inhabitants whose main occupation is farming and (petty) trading. 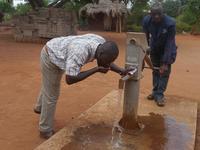 Water supply situation
The Logakope, Wodome-Gbogame has two boreholes. The first was constructed in 2000 and the second in 2003 by the Akatsi District Assembly through the implementation of the DANIDA funded water and sanitation programme. Before this programme, the community relied on only unimproved sources of water from streams, ponds and dams. The leadership of the community, realising the challenges of using water from unimproved sources, made a request to the Akatsi District Assembly through their Assembly member to be provided with a borehole to enable them to access safe water supply. The second borehole was constructed because the population of the community was more than the threshold of 300 people per borehole.

Sale of water
Mr. Emmanuel Kobla Kpevor is 36 years old and the secretary of the Water and Sanitation Management Team (WSMT) of the Logakope Wodome-Gbogame community. He is married with three children. According to Mr. Kpevor, the community practices pay-as-you-fetch as a way of raising revenue for operation and maintenance of their two boreholes. According to the secretary, the Water and Sanitation Management Team (WSMT) has set a tariff of GH10ps per bucket (20 litres) of water fetched from the facilities. The tariff was discussed and approved at a community meeting. 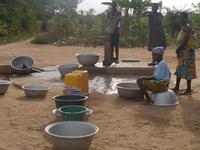 Mr. Kpevor said; "The tariff was set at GH10p to make sure it is affordable to all. However, some people still prefer to use water from unsafe water sources such as streams and dams. However these unsafe sources are only available during the rainy season. During the dry season, December to March, the water table drops low and makes it even difficult to pump a bucket full at a go. Community member Elizabeth Gokah describes; "During the dry season you pump for a while, rest and continue again for so many times before you can fill a bucket or basin."

The Water and Sanitation Management Team has employed vendors to sell water to users at the facility. Each vendor earns 10% commission on the total sales s/he makes in a month. The decision of how much commission a vendor should earn was also discussed and agreed in a community meeting, a demonstration of community involvement in decision making and operation and maintenance of the water facilities.

In the rainy seasons, from March to November, patronage drops drastically and vendors hardly sell enough to earn an attractive commission. In some instances vendors do not earn anything at all because they have not sold any water. Elizabeth Setudor is a vendor at one of the handpumps. She is 35 years old and married with a child. According to Elizabeth sales are good in the dry season when there are no alternative water sources. Elizabeth: "On a good day I make an average sale of around GH 25.00. Sometimes in the rainy season I do not sell anything at all. I am paid 10 percent of the total amount I am able to sell by the end of the month. Although sometimes the money is small due to low sales, it is good job, except the difficulties that come with it, like people abusing me if I refuse to let them fetch for free".

How water is sold
Water vendor Elizabeth Setudor; "The borehole is opened in the morning from 5:30 am until 9:00 am so that school children can fetch before going to school, after which I take a break. I reopen again at 4:00pm till late in the evening".
Fetching is based on first-come-first-serve and pay-as-you-fetch principle. This was agreed at the community meeting. Apart from the water vending, Elizabeth also does some farming but just as subsistence.

The perception of water users in the community is that the water is too salty. Elizabeth Gokah is a 35 year-old married woman with three children and a resident in the Logakope Wodome-Gbogame community. She uses the two boreholes in the community and also fetches from other (unsafe) sources. Elizabeth; "I use an average of six buckets (120 litres) of water a day for my household activities. I fetch four buckets from the borehole for drinking and cooking and the rest from other sources for washing and other household chores".

Elizabeth is not happy with the taste of the water from the borehole. She explains; "The water from the two boreholes tastes salty. We have complained several times about the situation to the Water and Sanitation Management Team of the facilities but nothing has been done about it". 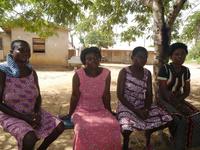 Patience Kpervor, a 30 year-old female resident of the community, adds; "Because of the salty nature of the water we don't use it much. It does not lather easily with soap and when used to cook the soup does not taste natural. Even if you use it to bathe, your skin gets covered with whitish particles which whiten the skin. We use the borehole to cook only in the dry season when other water sources are unavailable and get sachet water for drinking".

Charity Amewuda, 35 year old mother of three also laments: "There are also red particle remnants that settle at the bottom of the water when allowed to settle in a receptacle". She also says that during the dry season the borehole becomes hard and difficult to pump to fill a bucket.

However in Elizabeth Gokah's estimation, the performance of the Water and Sanitation Management Team (WSMT) is above average. According to her "They operate and maintain the water facilities quite effectively. When a facility breaks down it does not take long before it is fixed and services restored". Patience Kpervor agrees; "The WSMT is doing very well except on the issue of the salty nature of the water. They have not been able to solve this yet."

Mr Emmanuel Kpevor, the WSMT secretary, confirms that water from the two boreholes does not lather easily with soap when using it for washing and also tastes salty Kpevor; "As a result many people do not drink it. He said they have complained to the District Assembly but nothing has been done so far. Mr. Kpevor also stated that no water quality analysis test has been conducted on any of the facilities after their construction.

Mr. Kpevor said "We have requested of the District Assembly and the management of the Akatsi Town piped system to extend their pipe line to our community to enable us access piped water". Mr. Kpevor said they have not done any cost estimates to know how much it will cost but are committed to undertaking that project. For now they do not know how much it will cost but they were told some officers will come to do the assessment and cost estimates. Mr. Kpevor continues; "The money the WSMT currently has in its coffers is GHc 214. 45 but this cannot pay for the project so we may need to fall on the community for support. We may need to use the 'Howeza levy', a levy paid per households when we are about to celebrate the community festival, for this purpose".

Mr. Emmanuel Kpevor, stated that there are no frequent breakdowns because there is regular maintenance of the systems. However, whenever there is a breakdown, there is an area mechanic at Akatsi town who is called to come and do the needed repairs. The last time there was a breakdown it cost the Water and Sanitation Management Team GHC 265.00 to repair the borehole.

Elizabeth said the facility has not been having frequent breakdowns, the last time there was a breakdown was in 2010 but it was repaired quickly.

The Environmental Health Assistants (EHAs) from the District Assembly have been coming to the town but they come to the WSMT to advise on their activities.

Structure and activities of the Water and Sanitation Management Team

The Water and Sanitation Management Team is the management body of the facilities. It is to be constituted by 9-12 members with gender balance. Activities of the WSMT must be free from any interference, hold regular meetings and keep record of their activities.

However, the WSMT of Logakope, Wodome-Gbogame has only three members: the secretary and two members. It is without an active chairman and does not meet regularly, a situation that is having effect on the management of the facilities.

According to Mr. Emmanuel Kpevor "There have been difficulties with the administration of the water facilities because of lack of unity in the WSMT. The chairman is no longer as active as before as a result of some misunderstandings with the community. This is hampering the activities of the WSMT". He said for some time now there has not been any organised WSMT meeting because every time a meeting is called, the chairman is not available. 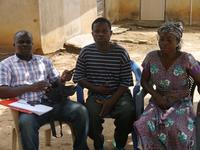 Mr. Kpevor further stated that "There is a community meeting every December after which issues relating to the WSMT activities are put forward for discussion and that platform is also used to render accounts to the community. A motion to dissolve the current WSMT will be put forward and if accepted, a new team will be re-constituted".

The idea for paying for water fetched from the facilities is not accepted by all in the community. Even though this was discussed and agreed at a community meeting, some people still want to fetch for free. Elizabeth, the water vendor, stated that people abuse and insult her for selling the water to them. She says; "Some people will come and fetch water and will not want to pay and if demanded they will insult and abuse me. Others will come after the tap has been closed and if you do not open for them they will insult me. But I have taken it as a responsibility as a member of the community to sell water".

In order to solve the problem of salinity, Charity Amwuda, a resident of the community and a water user, suggested that the WSMT should facilitate a pipe connection from the Akatsi piped system due to the community's close proximity to the Akatsi town. According Mr. Emmanuel Kpervor, the community is ready to contribute to undertake the extension of piped system from Akatsi town, in order to be able to access good drinking water. Kpervor: "The community is willing to contribute towards the purchase of the pipes and the labour cost for the connection".

There is the need for a training programme for the WSMT to sharpen their management skills.