The commune of Absouya is the third commune of the Plateau Central region that has hosted the Clean Hands, Good Health campaign organised by IRC with the support of UNICEF. It was on Monday, 2 May 2022 in the square in front of the town hall of Absouya. 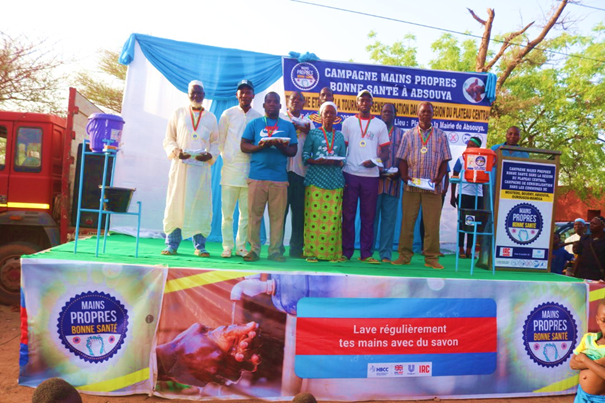 All groups of the population were represented and mandated to support the campaign (Ph. Production Universal)

The Clean Hands, Good Health campaign continues its tour to sensitise the population in the Plateau Central region on the benefits of regular handwashing. This time, Absouya is the focus of the campaign and at this third stage of implementation the objective and vision remain the same. To remind people, at the beginning of the rainy season, of the importance of handwashing and its crucial role in the prevention of infections related to dirty hands.

According to Salif Sanfo, Water, Hygiene and Sanitation Goodwill Ambassador, "This is the most difficult period in the rural areas because we must start ploughing the fields and prepare for the winter season, and when we start this season by being sick, it will be hard. He added and insisted that "the simple act of handwashing can prevent many diseases and it is necessary to remind people of this." 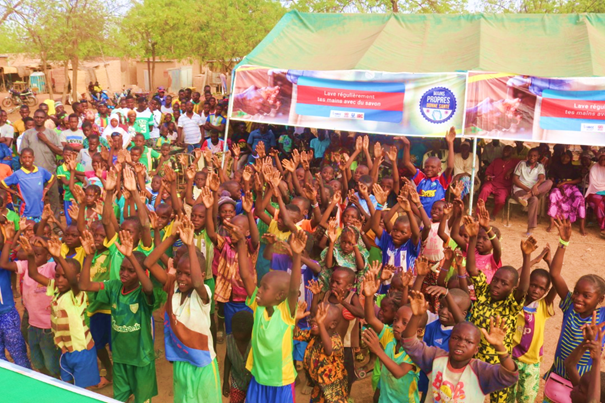 The ceremony brought together nearly 400 people, the majority being children, for sound animations and games, Aerobic Zumba warm-up and artistic performances. Children are the gatekeepers; they will spread the message to their families and make the achievements of the campaign more lasting.

For the occasion and as usual, medals were given to representatives of special delegations in Absouya, traditional and religious leaders, women and young people so that everyone in their community becomes an ambassador for hand hygiene with the aim of eradicating diseases linked to dirty hands.

"We have tried to motivate and honour traditional, religious, administrative and local leaders so that wherever they are, they will be the spokespersons for the promotion of handwashing," said Mr. S. Sanfo. If we look at the enthusiasm of the authorities and the people, we can easily see the interest they have in this action which was a success. Ourgou Manega will be the last stop and it is where the Clean Hands, Good Health campaign in the Plateau Central region will end.