Over 37 million people, including the "ultra-poor", have gained access to hygienic household sanitation in Bangladesh. Both donors and the government praise the success of the BRAC WASH programme. 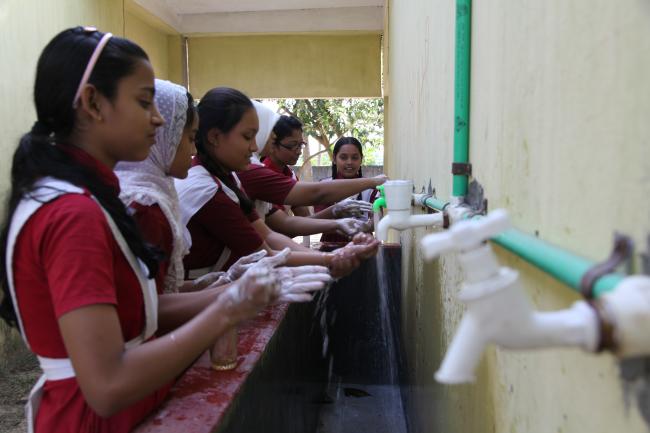 The BRAC water sanitation and hygiene (WASH) programme in Bangladesh has succeeded in reaching more than twice as many very poor people with sustained use of hygienic sanitation than it had targeted in ambitious plans.

These “beyond excellent” results amongst some of the people who were considered hard to reach have been independently verified and at the request of the donor, the Bill & Melinda Gates Foundation.

Since being established as a specialist programme in 2006, BRAC WASH has supported more than 37 million people to access hygienic household sanitation working through Village WASH Committees, cluster meetings and household visits, as well as work in schools.

Core funding for the highly successful first phase of the programme came from the Dutch Government. But the most spectacular results are seen in efforts that started in October 2011 to focus on “ultra-poor” households and hard to reach communities. The BMGF backed BRAC WASH to extend gains in the original 152 upazilas and to work in an additional five ‘hard to reach’ upazilas.

It was agreed that a satisfactory outcome would be to extend safe sanitation and its regular use to 295,000 more families, many of them considered to be “ultra-poor”. In fact 828,000 more people in the 157 upazilas achieved regular use of safe sanitation – 2.8 times more than the target.

Jan Willem Rosenboom, senior manager at the BMGF, told a workshop in Bangladesh that the results far exceeded their hopes, describing the figures as “beyond excellent, super excellent”.

“That is an absolutely fantastic result, in terms of the numbers and results for which we need to thank BRAC, not only the team here in the room but of course the many, many others who are not here, for delivery of the programme. The work points to increased confidence and self-reliance at community level.”

An independent report commissioned by BMGF from Emory University and the Bangladesh research group ICDDR,B reported that their survey showed figures even higher than those reported by BRAC. The verification report will be published shortly.

Hygiene has been the backbone of the overall BRAC WASH programme delivered through thousands of BRAC staff at village and upazila level. As well as success with sanitation and with hygiene measures such as handwashing with soap, more than two million people have gained access to safe water through deep tube wells, pond sand filters, and piped water schemes or simply by receiving loans to repair pump platforms.

One key feature of the programme has been to provide loans and training to rural sanitation centres, small businesses providing high quality latrine parts for communities.

BRAC WASH has worked with 5,230 secondary schools to install separate toilets with menstrual hygiene facilities for girls, and training teachers and students to improve hygienic practices.

Arsenic, the lowering of the water table, climate change, safe and sustainable services for all

As the second phase of BRAC WASH comes to a close the programme is charting a strategy for 2016-2020 to address the needs of people whose water is affected by arsenic and salinization, and to develop work on hygiene, sanitation and water with local government and others in urban areas.

The workshop in Dhaka was designed to share experiences of the WASH sector in Bangladesh and drew in other providers of services, including Plan International, The Max Foundation, Care Bangladesh, SNV and the Dutch Water Alliance, as well as donors and governmental representatives.

Carel de Groot, First Secretary at the Embassy of the Kingdom of The Netherlands, congratulated BRAC as “hugely present and effective and efficient when it comes to implementing”.

He urged BRAC to develop a leadership role in working with other providers to integrate WASH in the sector. “We are living in a world that becomes more and more complex and we have to become more outward looking and braver. You have tremendous experience and sharing that will automatically make you an advocate in the region.”

Kazi Abdul Noor, additional secretary and project director at the Policy Support Unit of the Local Government Department, said that Bangladesh had made remarkable improvements in water and sanitation, meeting the Millennium Development Goal for water and reducing open defecation to 3%. But significant challenges remained in addressing issues of arsenic, the lowering of the water table, climate change and achieving safe and sustainable services for all, including the hard to reach.

Continuing need for subsidy and support from government and donors

Patrick Moriarty, Chief Executive Officer of IRC said it has been a privilege to work as a partner with “one of the largest and most successful WASH programmes in the world”. He saluted BRAC’s bravery in facing up to the need to use subsidies to bring sanitation to the ultra-poor – at a time when the bulk of opinion was fundamentally opposed to this.  IRC believed passionately there would be a continuing need for subsidy and for government support, and donors needed to provide long-support term until it was possible to institutionalise the gains. “Of all the programmes I know, if any deserves continued support of its finances this is the one.”

Aaron Walling, South Asia Manager for Splash, supporting BRAC WASH and focusing on safe water for children in schools and other institutions in urban areas described  BRAC WASH as  a phenomenon. “It is something I hope I will tell my grandchildren some day that I witnessed social transformation on such a large scale.”

The workshop opened in Dhaka on 26 April 2015. At the request of Dr Ahmed Mushtaque Raza Chowdhury, Vice-Chairperson and interim Executive Director of BRAC, the workshop stood in a minute’s silence for those killed, injured and bereaved in the Nepalese earthquake the day before.

Report on a study to independently assess latrine coverage and use under BRAC’s WASH II Project in Bangladesh : final report

Strategy 2016 - 2020 BRAC Environmental WASH programme : everyone, everywhere, all the time