Triple-S Ghana shares results of the baseline assessment of the status of service levels, service providers and support functions, in Akatsi, Sunyani West and East Gonja districts in the Volta, Brong Ahafo and Northern regions respectively.

This report presents results of the baseline assessment of the status of service levels, service providers and support functions, in Akatsi, Sunyani West and East Gonja districts in the Volta, Brong Ahafo and Northern regions respectively.

In doing this, a set of indicators was developed to assess and monitor sustainable service provision. These indicators were based on norms, standards and guidelines set by CWSA. This included indicators on:

Between October 2011 and January 2012, baseline data were collected in order to score and benchmark facilities, service providers and service authorities against the agreed indicators. The data collection exercise was undertaken by district-level staff, using mobile phone technology.

Functionality is higher for piped schemes than for point sources. About a third of all point sources in the three study districts were not functioning well (these were either broken down or did not pass the stroke and/or leakage tests), while the majority of the piped schemes were functioning.

The majority of water supply facilities do not provide a basic level of service, as per the standards set for the community water sub-sector on reliability, maximum number of people per point source (crowding), maximum distance to the facility and water quantity. The water supply facilities in the three study districts provide basic (reliable, non-crowded) services (providing at least 20 litres per capita per day of water of acceptable quality, within 500 metres of the user community), to about 20% of the people which they serve. In East Gonja and Sunyani West, only 2% and 3% respectively of point sources provide a basic level of service. 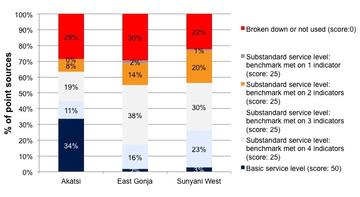 Many WATSANs did not meet the service provider benchmarks. WATSANs scored especially low on the financial management indicators. Community-based piped scheme water service providers, WSDBs, generally scored lower than the WATSANs. Part of the reason for this could be that the benchmarks are set higher for the WSDBs than for the WATSANs.

Although tariffs are relatively high (far higher than the tariff charged by the Ghana Water Company Ltd), annual revenues are much lower than expected, based on an estimated average utilization rate of 18-20 lpcd for each member of the user community. This is due to low consumption levels and / or high rates of utilization of non-revenue water. Therefore, revenue levels, though generally high enough to cover current annual expenditure, are likely to be too low to cover the operational and minor maintenance costs and costs of capital maintenance expenditure needed to sustain at least a basic level of water services.

This report presents a synthesis of the results of a baseline assessment of the status of service levels, service providers and support functions in three districts in Ghana.