Accountability and transparency of and to village councils need improving

A Watershed India workshop looked into the role of the Gram Panchayat (village council) in WASH budget tracking.

The 73rd Constitutional Amendment Act (CAA) of 1992 created Panchayati Raj Institutions (PRI) as institutions of local self-governance in India. The Act aimed to work two ways: decentralising governance to the lowest tier, enabling political representation of the community. Secondly, through devolution of funds, functions and functionaries, enabling the community to plan, implement and monitor development programmes for itself.

The intent of the 73rd CAA is highly valuable keeping in mind economic and social disparities between and within regions and states, and the need to involve communities in the development process. On the ground, however, the efficacy of Gram Panchayats (GPs) [village councils] as decentralised and devolved institutes to deliver development programmes vary from state to state. In some states, GPs face several challenges. Some of these challenges came to the forefront at the district sharing and validation workshop on budget tracking, held on 24 January 2020 in Ganjam district of Odisha. Organised as part of the Watershed programme, by Gram Utthan (landscape partner in Odisha), Centre for Budget and Governance Accountability (technical partner) and IRC, the workshop saw participation of community members, elected representatives of GPs, government officials and civil society organisation (CSO) representatives.

The purpose of the workshop was to disseminate and validate the analysis of the water and sanitation budget at the district level and below (block and GP), collected with the help of the CSOs. In the series of workshops aimed at building CSO capacity in planning for WASH, this workshop tied together the efforts to understand the institutional architecture in planning and implementation of WASH plans, the sources of funds available for the WASH plans, and the challenges in realisation of the same. Budget data was collected to understand if the challenges were related to budget policy (inadequacy of funds) or budget procedure (inability to effectively use available budgets). 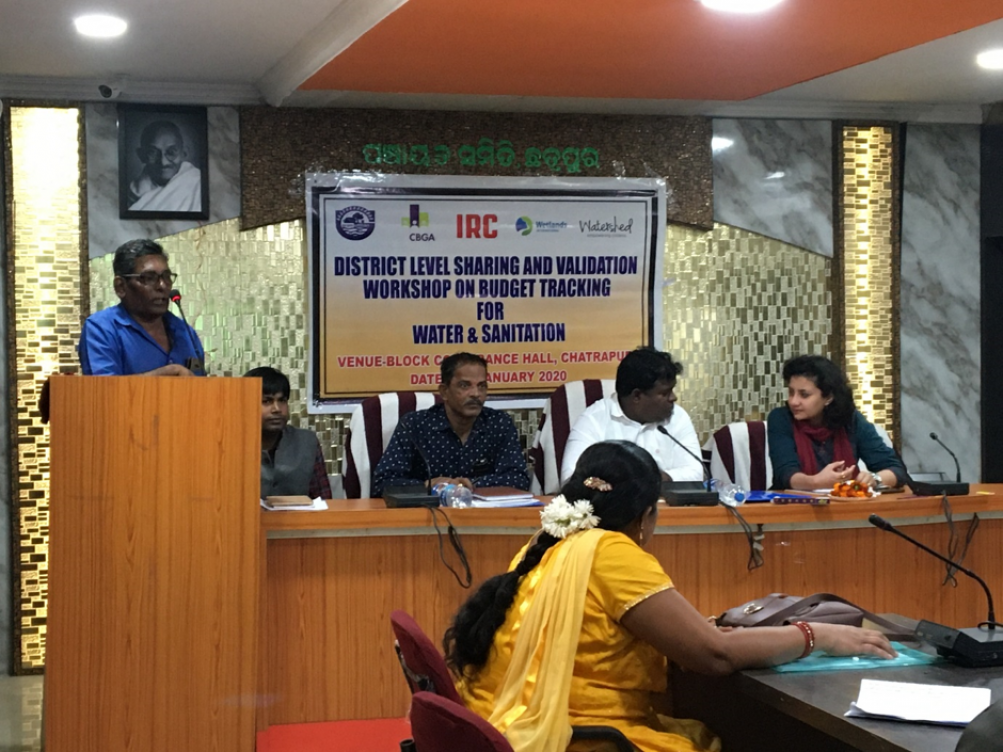 Two issues were raised at the workshop – one, the difficulty in obtaining budget data (which is in fact public information). Second, the difference between budgets allocated and budgets utilised. The reluctance in sharing budget data was, as emerged during the discussion, out of fear of it being used for reporting. The discussion on the second issue unfurled multiple underlying concerns of the GPs.

The discussion also led to identification of a few solutions to address the challenges:

The discussion was fruitful and brought to the fore the challenges that GPs face in exercising their role as institutions of local self-governance. GPs are constitutionally responsible for WASH and other development works. However, their dependence on the line department with its lack of accountability  clearly compromises the GPs in reaching their WASH goals. Therefore, it is very important to empower the GPs: they should be able to demand transparency and accountability from those who implement works on their behalf. At the same time, the GPs, as the lowest tier of the local governance structure, should be transparent and accountable to their citizens. Citizen representatives in the discussion mentioned that as residents of the GP while they get to know of the development works that have been implemented, they do not get to know of the cost breakup. Improving transparency and accountability is the only way to strengthen GPs as institutions of local self-governance and deepen democracy.

Can India meet its new ambitions for sanitation and water? - by Trisha Agarwala (CBGA), 11 Feb 2020

WASH Dialogue on budget tracking and policy in India

Strengthening the role of rural local bodies in WASH financing and services : policy learnings from a multi-stakeholder workshop