World Water Week 2019 through the lens of IRC

Finding ways to build and finance strong WASH systems, including everyone along the way. 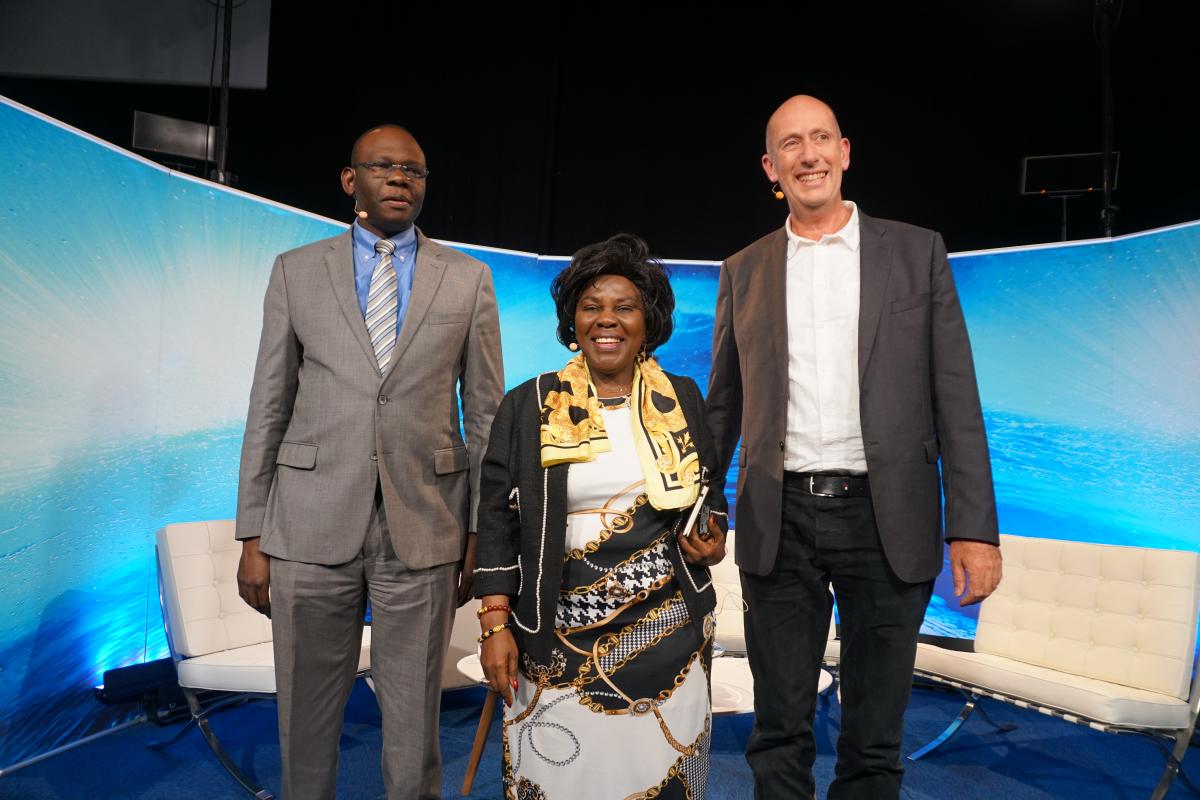 Stockholm International Water Institute’s (SIWI) World Water Week took place from 25 – 30 August with a theme centred around inclusion and bringing the voices of the marginalised to the fore, or Water for society: Including all.

While championing for a systems approach to water, sanitation and hygiene (WASH) is always at the core of IRC's work, this year's presence at World Water Week focused on three major points in particular:

The importance of government leadership

"When you have the government championing and believing in the idea of universal access, you begin to see that the money will follow the politics."
- Patrick Moriarty, IRC CEO

At the very heart of systems change is government leadership setting the foundation of a sound enabling environment for WASH services. In the SIWI Sofa event, Strong water and sanitation systems need strong government, IRC CEO Patrick Moriarty was joined by real examples of positive government leadership. Representing the voice of political and technocratic leadership respectively were the Minister of Sanitation and Water Resources Ghana, Honourable Cecilia Abena Dapaah and the Commissioner of Rural Water and Sanitation Uganda, Engineer Joseph Oriono Eyatu.

The significance of local and national political buy-in driving WASH systems change and success stories were among subjects explored. Particularly, how have programmes been redesigned to motivate governments to commit to leave no one behind and overcome short-term ambitions.

See the full recording of the sofa event below.

"It is imperative to invest in the local capacities of governments to better plan for universal WASH and to empower civil society to be aware of these planning processes to influence them at relevant times. This is how we can include the voices of the marginalised and advocate for them."
- Ruchika Shiva, IRC India 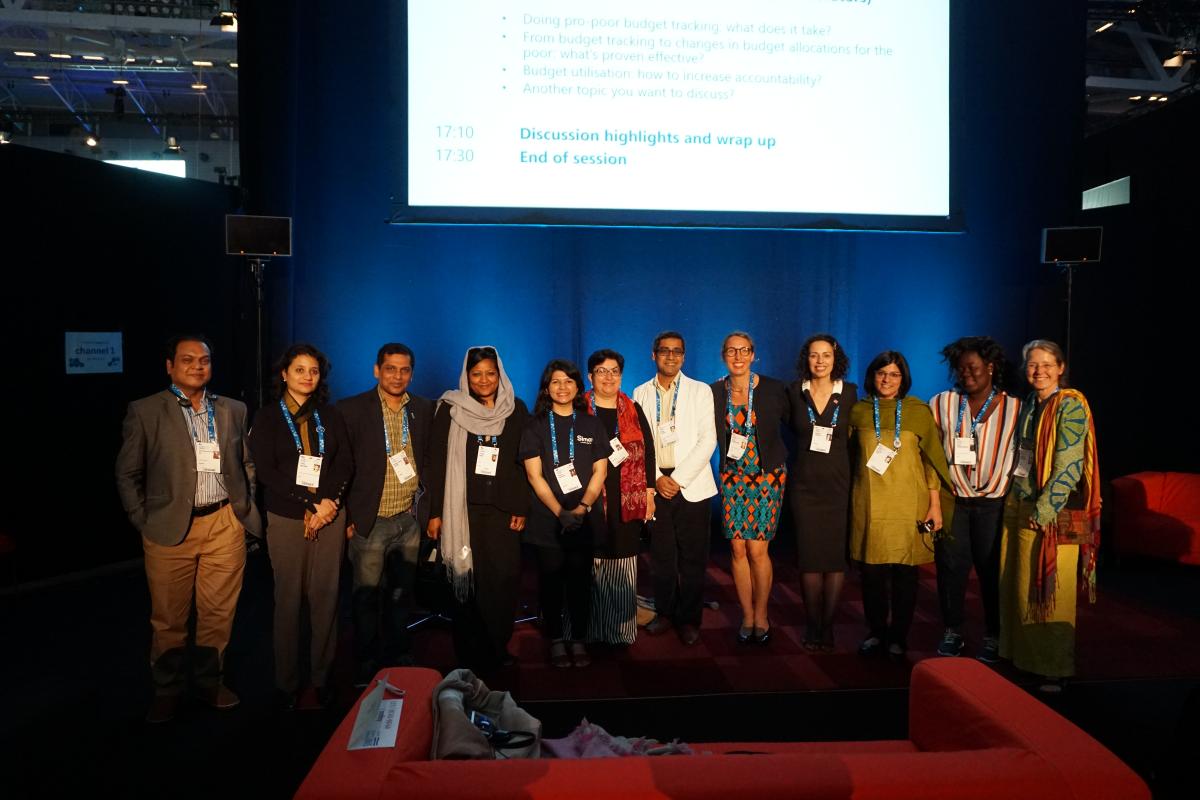 To meet SDG 6, the world needs an additional US$ 1.7 trillion investment in WASH through 2030. In the face of this substantial funding gap, how can the world ensure that the most vulnerable are not left behind, especially since doing so is likely to be less commercially viable?

Getting the foundations right for sustainable and pro-poor financial solutions was dedicated to unpacking some the foundational issues that undermine water and sanitation services from attracting the funding it needs. The interactive game-show style session featured speakers representing government, service providers and funders. "In the most remote rural areas the vulnerable don't have a voice and the existing finance available goes to the viable and profitable sectors. Feasibility is not the language of the poor" shared Joseph Oriono Eyatu, Commissioner Rural Water and Sanitation for the Government of Uganda. He also raised the overall danger of being reliant on external funding for water and sanitation services that are not yet commercially viable, "this presents an enormous risk, should donors be lost".

However, according to Christopher Flensborg from SEB, representing the perspective of the donors, investments in WASH could be spurred with aggregation, a robust systemisation in the education of local financial sectors and increased collaboration with the private sector. John Moyer of Water Equity admits that "when it comes to social return, WASH has a major advantage over other sectors".

Monitoring public financial flows and influencing pro-poor budgets used speaker presentations, videos and group discussion to foster an exchange of important considerations and successful strategies to encourage more equitable budgets. The unique power and responsibility of civil society was the main focus of the session. Case of studies from civil society organisations in Bangladesh, India and Kenya highlighted the impact of budget tracking and key public participation at the local level. The budgetary challenges of leaving no one behind are inevitable, but supporting the voice of the vulnerable, understanding their demands and priorities and aligning action with budgetary cycle were identified as important.

Accountability and the role of civil society

"Accountability is not about making each other feel guilty it's about exchanging knowledge and accelerating learning. This is the only way we will reach SDG 6 by 2030."
- Canisius Kanangire, Executive Secretary, African Ministers' Council on Water (AMCOW) 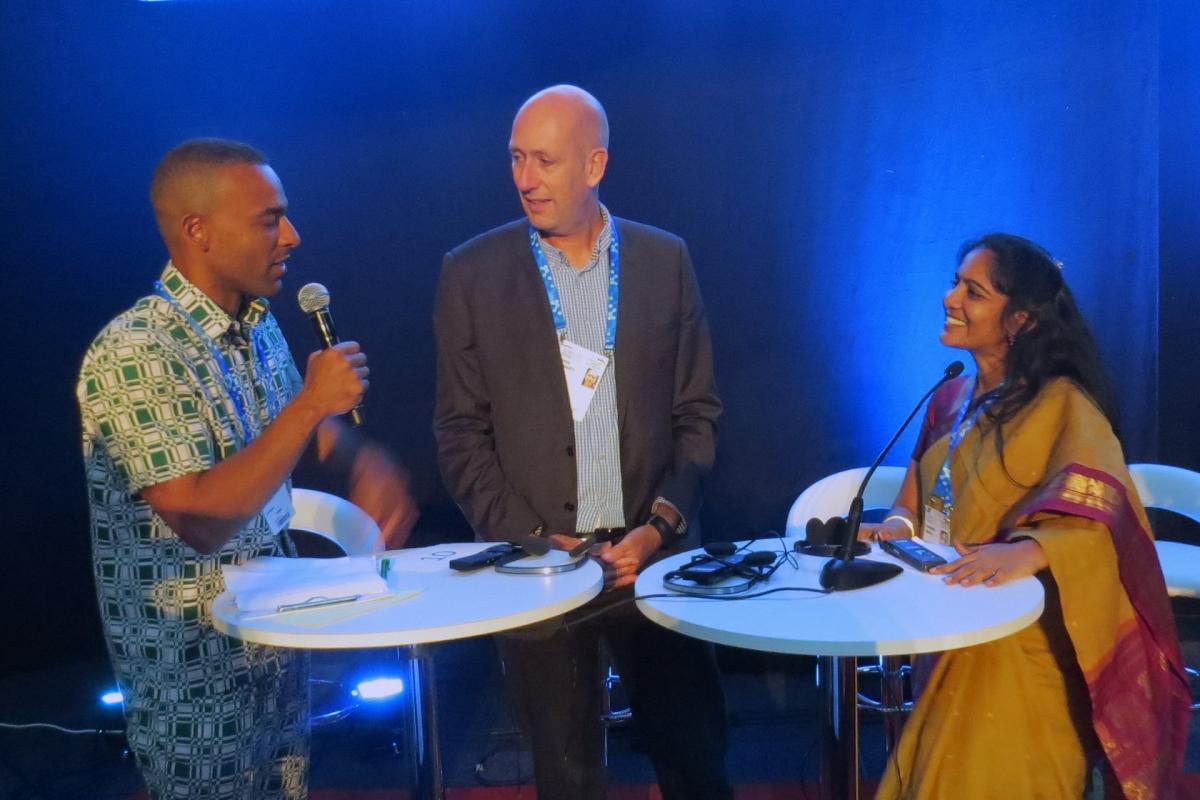 Addressing the elephant in the room: Accountability for SDG 6 brought together panellists from Africa, Asia and Latin America to share experiences and to discuss the challenges and opportunities presented by SWA's Mutual Accountability Mechanism.

Among the speakers was the Minister of Sanitation and Water Resources Ghana, Honorable Cecilia Abena Dapaah who expressed her appreciation for the tool, stating that "SWA Commitments [through the Mechanism] are challenging, but key to a country's development agenda".

The interactive session, served as a platform for politicians, donors, civil society and private sector to exchange ideas, explore the purpose and vision for accountability and identify common ground. Howard Bamsey, Global Water Partnership Chair, reminded the audience in his concluding remarks that although the purpose of accountability may be about compliance, tracking and improved performance, none of this will be possible without an emphasis on mutual and increased participation.

Similarly, in a lively session facilitated by TV-host Ikenna Azuike, the crucial and unique influence civil society has in holding those in power accountable to acting or failing to act on the Sustainable Development Goals. CSO, change makers and allies with government ain reaching SDG 6 began with a sober reminder, "Around the world, it's alarming that the voices of CSOs are being regulated and silenced - the civic space is shrinking," warned Brechtje Paardekoper senior policy advisor at the Government of the Netherlands.

Given this reality, assuring that the world stays on track with its ambitions demands that civic space is protected. This becomes especially important when civil society represents or advocates for the marginalised or underrepresented. According to Snehalatha Malaka of Freshwater Action Network South Asia (FANSA), we need civil society "to make a buzz, to tell government that they have not met their promises on the ground", but just as importantly "they can also bring evidence to the table".

Read SWA's World Water Week live blog or Holland Water's news article for their take on these sessions on accountability.

Reception at the Netherlands Embassy in Sweden 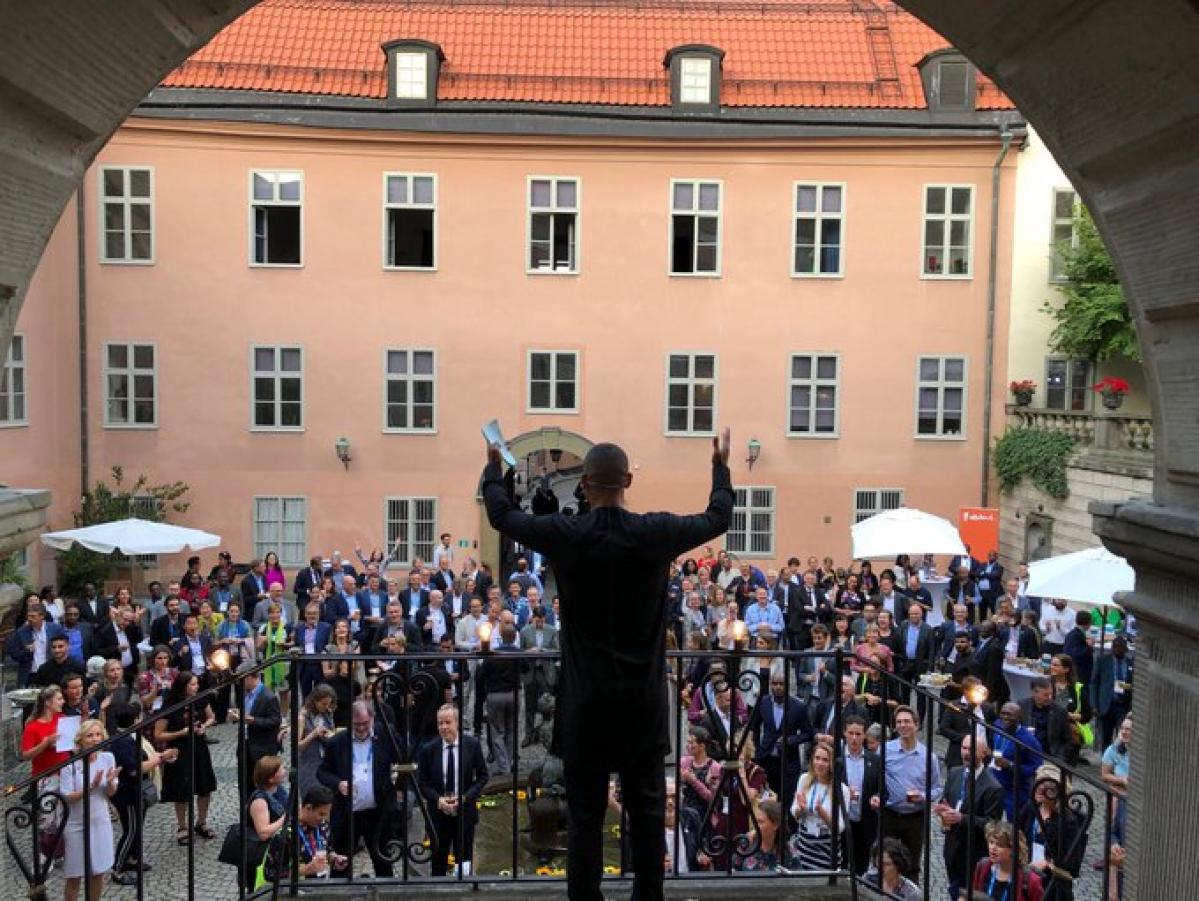 IRC and partners were honoured to co-host a reception in the courtyard of the Netherlands Embassy in Sweden. This memorable event had distinguished guests from World Water Week and beyond, featured a pop-quiz and announced the winners of the 2019 RELX Environmental Challenge.

Launch of the WASH Systems Academy

"Strong WASH systems and capacities are at the heart of sustainability. Finally there is a free tool available to all and focused on holistic solutions."
- Pim van der Male 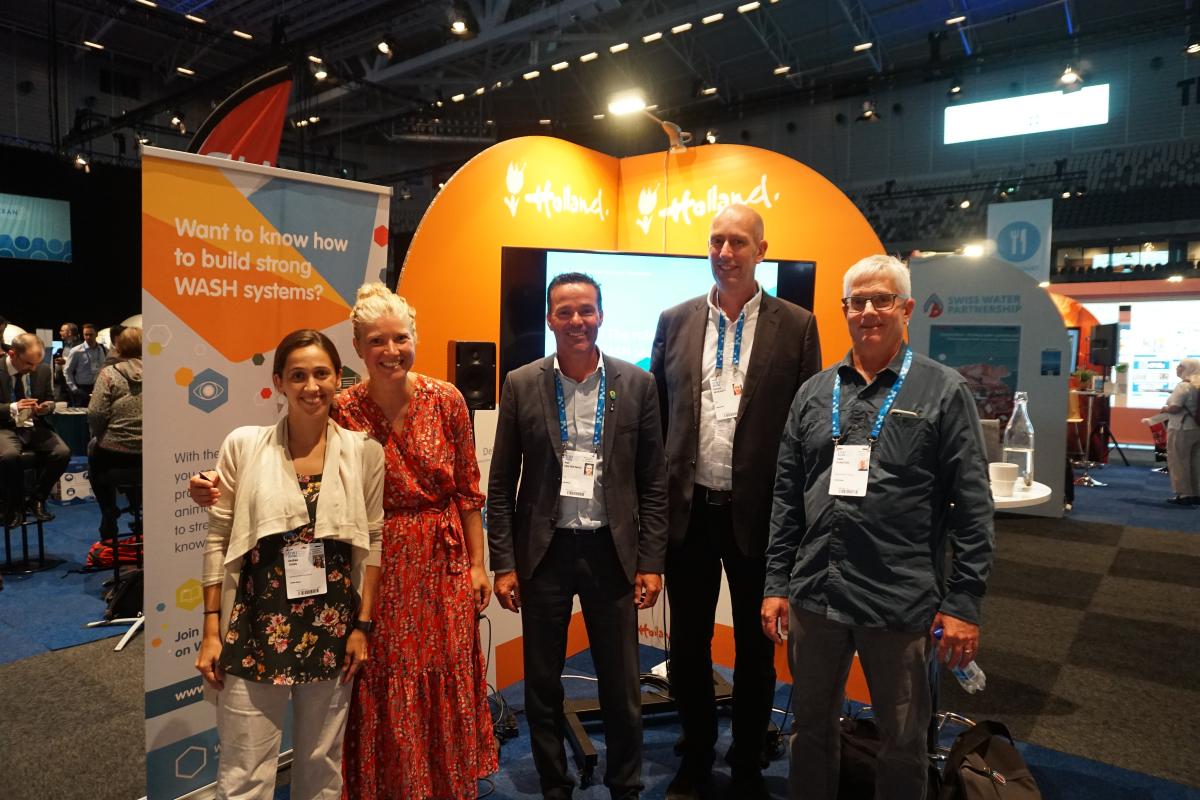 IRC together with representatives of the funding organisations for the WASH Systems Academy, Conrad N. Hilton Foundation and the Netherlands Ministry of Foreign Affairs

Now, everyone can know what it takes to build strong WASH systems. The WASH Systems Academy is a free new online learning platform initiated by IRC and available to all.

During this launch event, Jeske Verhoeven and Patrick Moriarty of IRC introduced the innovative tool and its unique contribution to the sector. The event also included remarks by Chris Dunston of the Conrad N. Hilton Foundation and Pim van der Male of the Dutch Ministry of Foreign Affairs whose funding supported the development of the platform. It is now possible to register and learn the basics of a systems strengthening approach in a dynamic and interactive way. Find out more here. 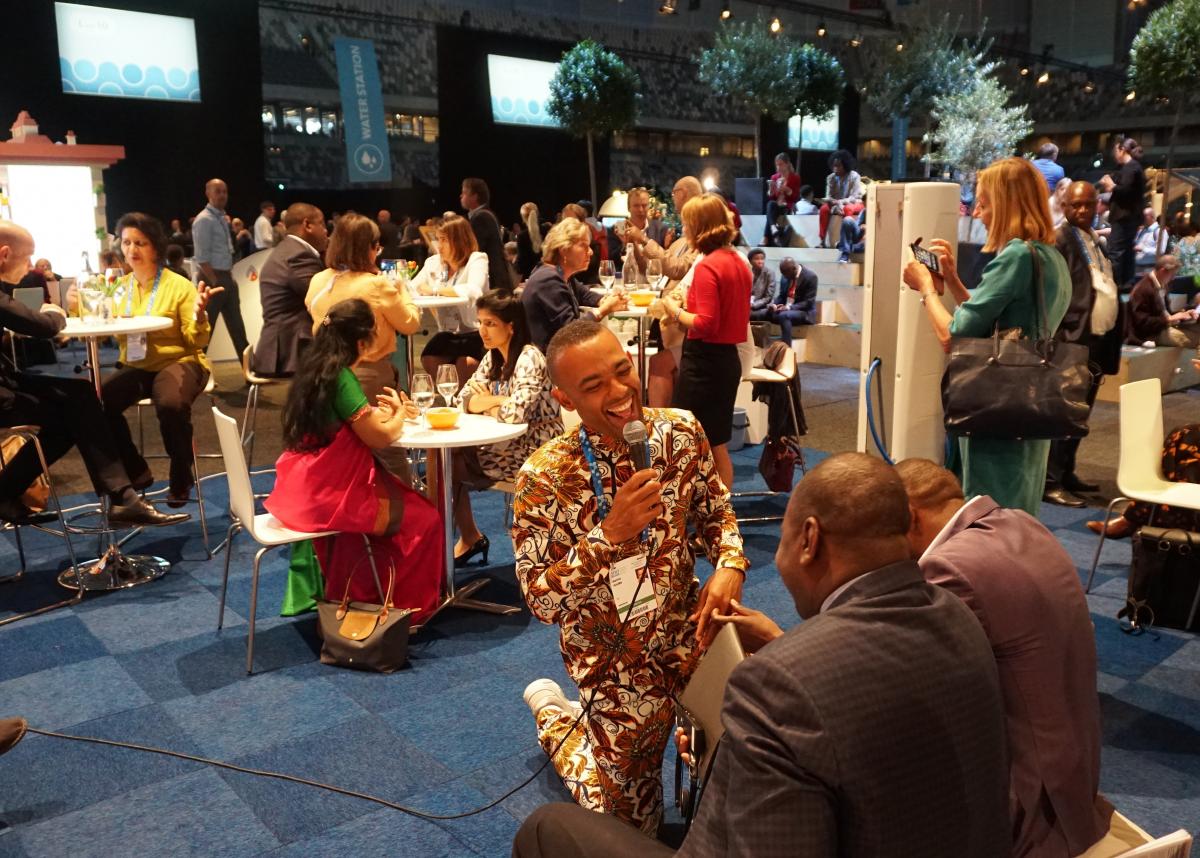 On a much more light-hearted note, Ikenna Azuike facilitated Watershed's Speed Dating session during which World Water Week participants were able to partner with and speak to representatives of the Dutch water sector. Missed the session? Watch the livestream here.

A GLAAS half full? - blog by Patrick Moriarty

Two new UN reports show where we are and where it is we want to get to; now it's time to step up national leadership.