“They are drinking our shit”

If it is possible to move in a few years from an iPod to an iPhone or and iPad, why are we in the water sector still struggling with the handpump? When can we expect the iPump 2.0? Did Steve Jobs die too early to invent this? As the naked truth about poor levels of functionality of hand pumps becomes ever clearer, it seems there is a strong move towards small piped systems, even in many African countries. But is this move warranted?

I was in Ghana last week to assess the potential for multiple-use of water in domestic systems there as part of a broader study on multiple use of water. One of the trends I picked up there is the effort of the government, through its Community Water and Sanitation Agency (CWSA), to turn boreholes with handpumps into what they call “limited mechanised schemes”. These are basically schemes where handpumps are taken off existing boreholes and replaced by a motorised pump, a poli-tank is added as well as a few a small distribution system with some standpipes.

This particularly takes place in  slightly bigger villages of around 1000 inhabitants and where there are  high-yielding boreholes. So far, 90 of these schemes have been developed, while another 1000(!) are planned. My colleague from Uganda mentioned the same; he estimates that 80% of investments in rural water supply go to such small piped systems in rural growth centres and growing villages. 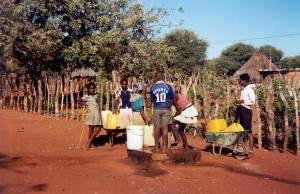 The drivers for this trend are manifold. First of all, there is of course demographics. As villages grow and areas get more densely populated, it starts to make sense to shift technology from handpumps to motorised pumps with piped distribution schemes. Also, it opens up the possibilities for productive use of water – the topic I was looking into in Ghana. In these schemes, people still wouldn’t have household connections, but at least would have water slightly closer by, and have access to larger amounts of water. This can be used productively. WASHCost research in Ghana showed that over 20% of households in small towns use water from their systems for all kinds of small businesses, including food vending, processing of agricultural products, cattle etc. There may thus be a genuine demand for higher levels of service, so that productive use of water can be enabled. Earlier work on multiple-use of water had shown that this is of course also possible around point sources, but to a much more limited extent. Villages in Kenya with piped systems have higher degrees of productive use happening than those with point sources. Costs are another important driver. The big cost in developing water systems in Ghana are the costs of drilling boreholes. So if you invest 10.000 US$ in drilling a borehole, you might as well put a bit of extra money in developing such a basic piped scheme, rather than a handpump, for little additional costs. There may also be more dubious drivers for this change in approach. The cynics would say that planners and engineers can get a bigger cut out more complex piped schemes, than from simple boreholes and handpumps.

The drivers mentioned above are strong and important ones. And they are likely to be there for the next years to come. Moreover, they are not the latest trend in a sector that likes to go from one trend to another. They are driven by underlying factors outside the water sector, that are not going away soon. Surely, there will still be many bugs, as motorised pumps will also need to be maintained and replaced, and piped may have high levels of inefficiency.

But as important as a change in pumping technology itself is that it also allows going from basic community-based management (CBM) to CBM 2.0, as piped schemes also provide the opportunity to professionalise service delivery. Schemes become then big enough to hire a dedicated plumber or water vendor. It may mean a shift from collecting funds in an ad-hoc way as often done around hand pumps, to more systematic tariff collection.

So, the iPump for Africa will not be some shiny new technology, but just a simple motorised pump with a small piped distribution network. It is entering the market rapidly, and may well mean a technological breakthrough for an important segment of the rural population. But, let’s also take some words of caution. A large number of people still relies on hand pumps, and will probably continue to do for a long time. Some may ask questions on whether to invest in new systems for people currently unserved, even if we know that many of these investments will not be sustainable, or to invest in gradually improving service levels for those who already have some type of service by moving from handpumps to small piped schemes. And shouldn’t we invest rather in low-cost pumping technologies? These are all valid questions, but in my view the rural water supply sector should try and cater in different ways for different needs as the traditional rural-urban divide gets blurred with all types of small towns in between. And in this, lessons from the small piped systems may be relevant for handpump systems, and the other way around.

“They are drinking our shit”