Leaving no one behind : identifying and addressing barriers to WASH service delivery in Uganda

The opening of the first Menstrual Hygiene Management (MHM) Conference in East Africa taking place in Uganda on 14 and 15 August 2014 brought to bear some heartrending revelations.

By Lydia Mirembe and Marielle Snel

True to the conference theme “break the silence on menstruation, keep girls in school” with some participants opening up and telling stories of the horrendous thing that happen to girls who are having their menses. 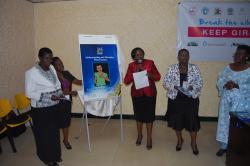 In a skit, children from Mulago Private School revealed that at school, girls are teased and made to feel embarrassed whenever they are having their monthly period. In a mock radio talk show, children from Achilet Primary School in Tororo explained that many parents do not provide the things that girls need to take them through this time of the month. No pads, no painkillers etc.

A senior woman teacher from Achilet School also explained that while they counsel the girls and even try to provide for some emergency cases, the school does not have adequate resources. She explained that in the past they used to provide paracetamol tablets from the nearby health centre, but this is not available anymore because the centre could no longer provide free drugs. The girls thus have to endure that pain.

Clearly, menstruation is shrouded in myths, taboos and misconceptions. These are perpetuated by the fact that no one wants to address them directly. Everyone talks about menstruation in hushed tones. As a result, girls are very furtive when they are having their monthly period. Even when they make mistakes they don’t want to talk about them openly. Some girls for example don’t know that when they wash their sanitary clothes, they are supposed to spread them out to be dried under the sun. Because they want to keep everything secretive and private, their clothes remain damp.

Within the context of the MHM conference there was also an MHM lab that has been developed by the Water Supply & Sanitation Collaborative Council (WSSCC) India which is an information tent (in the form of a latrine), in which girls, women as well as boys and men can get information around MHM. 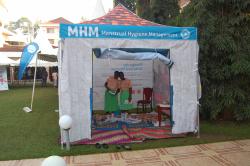 It is time to debunk those myths and misconceptions. It's time to tell the truth about menstruation.

The theme on breaking the silence about menstruation is timely. Indeed the Minister of Education, as stated during the opening of the event, put it in her message: “What a beautiful theme!”   Unless we start talking about menstruation openly, the suffering will continue. It is time to debunk those myths and misconceptions. It’s time to tell the truth about menstruation. It is a normal bodily function just like breathing, eating or going to the toilet. Above all, menstruation is a sign of good reproductive health. It is a sign that a girl is growing up and transitioning from one stage of development to another. This however means that there is a need to address MHM issues not only regarding software issues but also hardware issues which include girl-friendly latrines.

In a next blog, we will be sharing key recommendations from the first Ugandan MHM conference.

Leaving no one behind : identifying and addressing barriers to WASH service delivery in Uganda