Weekly WASH graph: who is left behind, and how much?

If we want to leave no one behind, we not only need to know who is left behind, but also how far behind they are.

One of the nicest articles I have read recently was this one, about the history of access to WASH services in the Netherlands. It shows how services gradually extended from a small group of urban elite, those who were willing to pay for a good service—to entire urban areas, as the elite became aware that if the poor did not have access to WASH services, they too would suffer. Subsequently, services were extended to most rural areas, as WASH was increasingly being seen as a public service to which all were entitled, reaching eventually those living in the most remote rural hamlets. The authors also discuss how the initial investments by the elite and later by the public sector allowed for the extension and funding of services for the poorer and more remote populations.

In other words, the growth in access to WASH services needs to be balanced between the better off and the poorer parts of the population and between the urban and rural, so that access remains affordable for the poor and the rural populations. Without that balance, cross-subsidies are not possible. That then begs the question: how we can measure whether current levels of access are balanced between different wealth groups? Or whether the poor remain left behind and services are concentrated among the better off? In this (long) blog, I explore ways of measuring and visualising such equality in access.

JMP data and graphs on inequality

The first form of visualizing equality in access are the equality-graphs on the JMP website. These graphs show the level of access for different wealth quintiles. You can then see whether indeed the richest quintiles have a higher level of access than the poorer ones, and how large is the gap. This is the most straightforward and clearest way of seeing equality in access for a given country.

The concept of the Gini coefficient

Applying the Gini coefficient to WASH

I have downloaded the available data from the JMP site on levels of access to at least basic service for different wealth quintiles. Note that these data are not based on time series but the most recent such measurement by national surveys. These are not all done in the same years, so comparing data across countries is somewhat limited. Using those data, I then first created Lorenz curves, and then calculated the Gini coefficients.

Results for access to basic water services
The graph below shows the Lorenz curve for a number of selected countries. 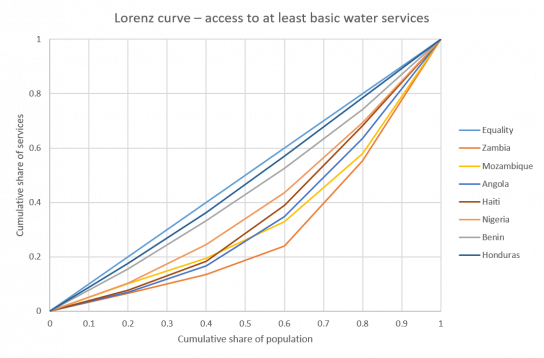 In this graph, Zambia has the most unequal distribution of access to services, whereas Honduras has the least unequal. In Zambia, 60% of the population has a bit more than 20% of all services being provided. In Honduras, the poorest 20% still has access to 18% of all services provided.

The latter is not surprising, because generally speaking the value of the Gini coefficient is lower (so more equal) in those countries where total access is higher, such as in Honduras. This can be seen better in the graph below, in which the red line indicates the maximum values of the Gini coefficient for a given level of access. The blue dots represent the actual Gini values of various countries. As coverage reaches more than 85%, countries start getting close to both the maximum values of the Gini coefficient, and to perfect equality—such as in Honduras where total coverage is 92%. The graph shows also that for a given level of access, countries can have very different levels of equality in access. For example, Niger and Tanzania have similar levels of access (47%) but in Tanzania the Gini coefficient is higher (0.27) than in Niger (0.11). In Niger, the level of access is equally low among all five quintiles, whereas in Tanzania, the richest have 84% access, and the poorest only 21%. 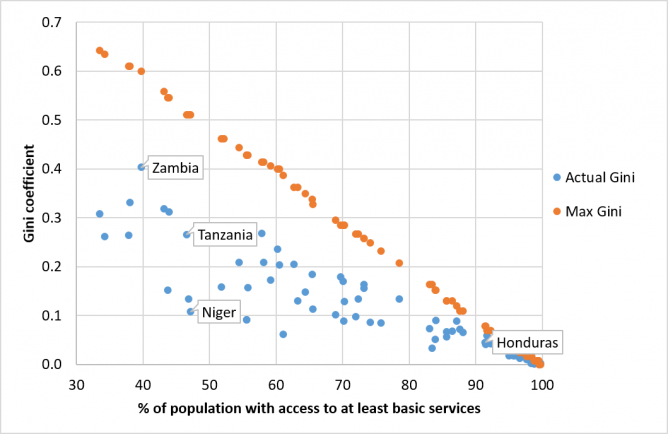 Graph 2: Gini coefficient in relation to % of the population with access to at least basic services

The graph below shows the Lorenz curve for access to basic sanitation services for a number of selected countries. The spread and width of these curves is much wider than in the case of water. This is probably due to the fact that overall coverage levels in sanitation are lower. We also see that sanitation tends to be more concentrated in the richest wealth quintile only. In Benin for example, coverage in the richest quintile is 50%, whereas in all the other four quintiles it is less than 15%. The same pattern can be observed in several other West African countries. Namibia is the country with the biggest gap between the richest quintile (with 87% access) and the poorest (just 3% access). Several Asian countries show a similar pattern (Laos and Indonesia, for example), but in the poorest quintiles, access is higher (around 30%), bringing total inequality levels down. 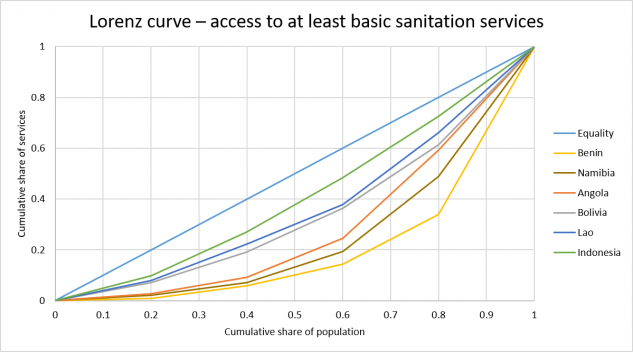 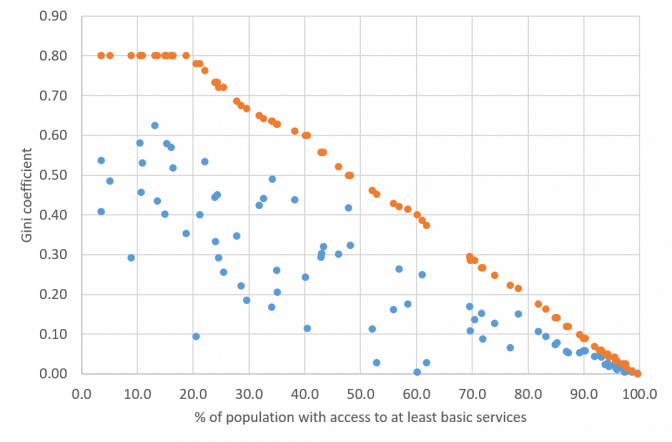 Graph 4: Gini-coefficients of countries in relation to the % of the population with access to at least basic sanitation services

The SDG imperative of 'leaving no one behind' requires knowing who is currently being left behind, but also how far behind they are being left. Additionally, as countries' access to WASH services increase, they need to ensure that poorer and richer segments of the population are in the same service areas. Cross subsidies need to be arranged and the fixed costs of developing WASH infrastructure costs should be born by the more affluent populations, so as to make the smaller marginal costs of connecting the poorer populations more affordable.

This requires that we start tracking inequality in access through some of the measurements and methods described here. Each of these forms of measurement and visualisations of the gap has its advantages and disadvantages. If you want to analyse the current situation of a country, the graph on the JMP website tells you the details. But if you want to compare across countries, a Lorenz curve may be more useful. For comparison over time, or comparing the country with the maximum level of inequality, a Gini coefficient may be useful.

I hope that through the analysis of these kinds of data, we can get better insights into current levels of (in)equality in access and ways to start addressing them. If you want to explore further data for a country of your particular interest, please visit the JMP website, or find a copy of my database below.

A big thanks to Catarina Fonseca for reviewing this work.