This blog was co-authored by Jacob Clemente, Intern for International Programme at IRC

Stef Smit's post from 2016, titled "Past performance is no guarantee of future results," explains the value of making projections for realistically achieving the target for universal WASH access by 2030.

Two years since the blog, the Joint Monitoring Programme (JMP) has updated their dataset to reflect the new service level definitions and targets for the Sustainable Development Goals (SDGs). We can now more accurately determine water and sanitation access levels for "at least basic services" for countries based on SDG 6.

Based on past performances, and by swimming deep into the wonders of Excel, we were able to gather insights into if and when all countries would reach universal access. We want to emphasise that this exercise is about projections and not a true prediction of access.

To ensure consistency, we applied the same methodology Stef used. Using five-year intervals starting from 2000 until 2015, we made projections for the 232 countries in the JMP dataset. We then linearly extrapolated the average access growth from the past 15 years to 2030, the end of the SDG era. For this analysis, we considered at least basic services and above as achieving the targets.

JMP provides data for both urban and rural settings in water and sanitation. This paints a more nuanced picture of the lack of equity between urban and rural populations. For example, our projections show that India will achieve rural water access by 2040, a full 213 years before achieving complete urban water supply access by 2253!

Similar to Stef's line of thought, we determined access growth rates of the 10% best performers. We calculated these rates by taking the 9th percentile of the average annual access growth of all countries. These values can be considered the frontier for access growth.

Here are the results:

We observed a similar trend to Stef's results, as shown in the table above. The urban water access rate growth remains the lowest while rural sanitation access rate growth remains the highest. The rapid increase in rural sanitation is likely linked to the push toward eliminating open defecation through community-led total sanitation. However. according to the Global Sanitation Fund, significant and ongoing follow-up program support and repeated interventions will be needed to maintain open defecation free status and avoid slippage or regression on the progress made in recent years (Jerneck, van der Voorden, and Rudholm, 2016).

Looking at different indicators suggests that population growth may be surpassing access. For example, Afghanistan, one of the countries represented in the urban water sub-sector, has a 3.0% population growth rate. It is ranked 19th in the list of fastest growing populations in the world, with its urban growth rates exceeding rural growth rates. This could mean that access—even when growing at a rate of 2.6% per year, may not be sufficient to keep pace with the rapid population growth.

Staying true to Stef's classifications, we categorised countries into five different groups using the linear extrapolations and extrapolations with the frontier rates of access growth:

The linear extrapolations yielded the results in the table above, representing the fate of countries in achieving universal WASH access by 2030. Each country has been designated a performance category, disaggregated for urban and rural for water and sanitation, respectively. 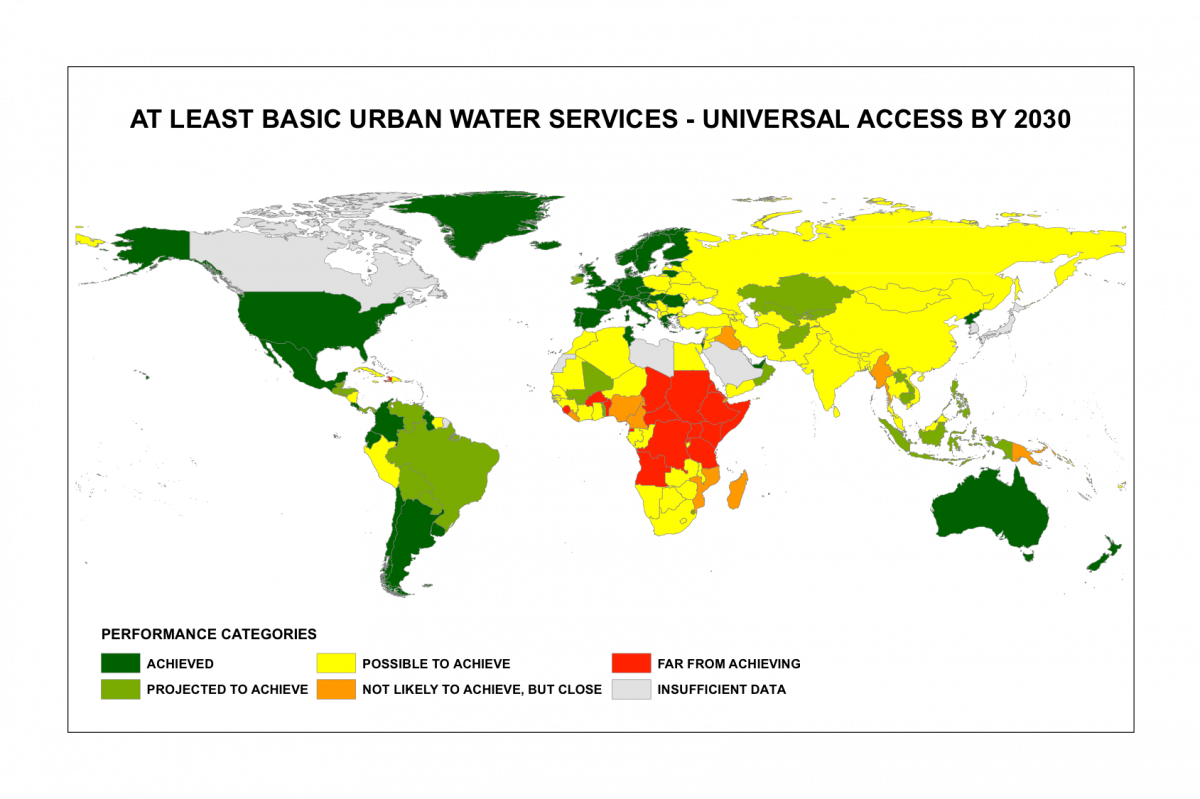 In urban water, it would be possible to achieve 100% access in majority of the countries if these countries stay within the access growth frontier, keep up with their past performance, or progress at their current rates or growth. This includes a total of 95 countries that can achieve urban water for their citizens. In contrast, 29 countries would not achieve the goal, with some countries even demonstrating negative rates of growth. Countries such as Sudan and Somalia, although considered fragile states, demonstrated positive rates of growth; however they will still be unable to achieve universal access, even if their access grows at the frontier rate. In comparison, most countries outside the sub-Saharan Africa region seem to be on track to achieve universal access by 2030, as signified by the darker blues in the map above. 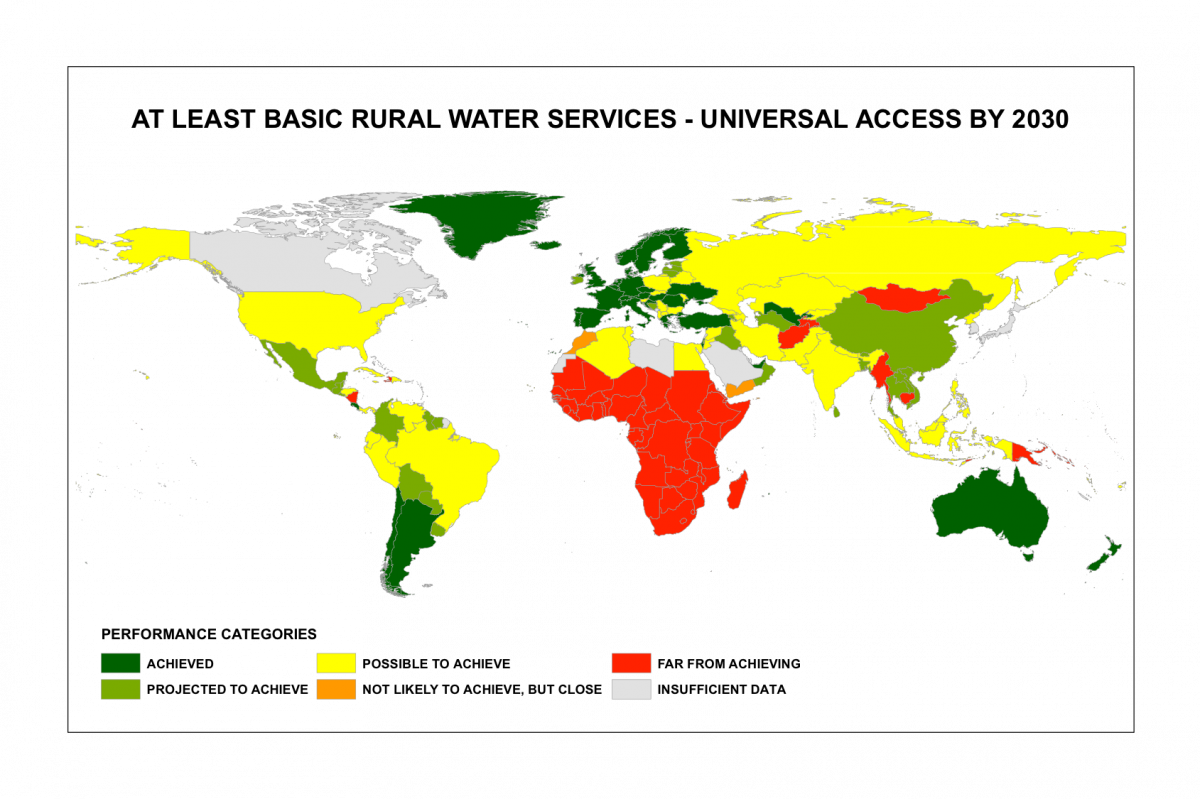 For rural water, similar to Stef's results, the majority of countries that are not likely to achieve universal access are in Africa (79%). Even with a 3.5% average required rate of access growth, the 44 African countries will be unable to achieve universal access in 2030. This is displayed by the lightest shade of teal in the map above. The countries that are "Not likely to achieve, but close" and those that are "Far from achieving" include some upper middle-income countries such as Botswana, Equatorial Guinea, and Gabon. These countries could possibly beat the frontier curve if they exceed the required rate of access growth. Lastly, 10 out of the 56 countries have negative rates of growth.

For urban sanitation, the numbers are very similar to Stef's blog except that secondary to insufficient data from the JMP, many countries could not be accounted for, which lowered the number of countries in the "Not likely to achieve, but close" category from 12 to 1. So, 39% of countries can achieve universal access in urban sanitation while 36% will still be without universal access by 2030. This list, as represented by the lightest shade of green in the map above, includes countries with the largest urban populations such as India and Indonesia. Even at frontier growth rates, these countries will have an average urban sanitation access rate of 64%, well below the mark.

With regards to rural sanitation, there were no countries that fell under the "Not likely to achieve, but close" category. 43% of the world's countries are far from achieving rural sanitation by 2030, even with an increase in access growth of almost 7 percentage points--the highest in this analysis--over the next 15 years. The average access levels of the countries in this category would be 47% by the year 2030. This list includes Burundi and Papua New Guinea, countries that contain the world's highest rural populations. As seen on the map, there are not many countries that have achieved (darkest green) or are projected to achieve (dark green) universal access by 2030.

While the results don't seem all that promising, they can be useful in discussing a country's current progress towards attaining universal WASH access by 2030. More work has to be done and that can start with examining context-specific reasons for why a country has fallen into its performance category. Considerations should also be made to understand what changes in context, anticipated or not, could change the rate. These goals might seem lofty when looking at present challenges, but identifying these reasons can initiate positive steps towards universal access.

A note on insufficient data: A majority of the countries and territories in this category were small (like island nations in the Caribbean). Additionally, there were countries (like Japan and Canada) that had data for the overall population but did not have urban and rural disaggregation. Lastly, we decided to restrict our analysis to countries with at least three data points so that we could have a longer time period (of at least 10 years) to calculate a more accurate rate of growth.