This year the rains started in March and in June the water ponds still have water in them. Mwende is happy because now she only has to walk ten minutes to fetch water for her family. 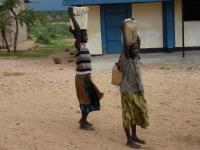 She knows that the water is not clean, but the alternative safe water is a well eight kilometres away and it will take her a whole day to collect lesser amounts of water from there. The pond will dry up soon now the dry season has started and then she will have to make the long journey once every two days.Mwende lives in Moyale in Northern Kenya and she shares her struggle for water with hundreds of thousands of other families. Most of them are pastoralists, although more and more families are taking up agriculture at a small scale to diversify their livelihood, which is still largely based on livestock. In their daily struggle for water, they have to balance many different water needs: water for livestock against water for families; water for their own tribe against water for migrating herds; water for livestock against water for kitchen gardens; water during wet seasons against water during dry seasons; water during years with normal rainfall against water during droughts.

In 2013 a Millennium Water Alliance consortium of organisations from the United States and The Netherlands started to work with the population and local authorities in four small areas of approximately 1000 square kilometres to develop local water master plans that should guide future year-round availability of water in the areas. The plans are based on a shared long-term vision of the area and an analysis of the water demand, barriers for access to water and the potential of the existing water resources and infrastructure. The US-based organisations (Food for the Hungry, CARE, World Vision and Catholic Relief Services) have a long-term presence and commitment in the areas and therefore also an in-depth understanding of the local situation. Acacia Water is specialised in the 3R (retention, recharge and reuse) methodology, which aims to maximise the use of shallow groundwater storage. With their expertise detailed hydrogeological assessments of the areas are made with estimates and recommendations for optimal water use in the future. Aqua for All stimulated the engagement of the private sector to make small scale solutions for water and sanitation problems available.

IRC supports the project partners and stakeholders in the area in strengthening local water governance with the aim to build the capacities and mechanisms for balancing the different water interests in the areas. Besides the water demand of people and livestock, there is also a growing demand for small-scale agriculture and a substantial demand from wildlife. Climate change is making the droughts extremer and rain patterns more unpredictable. Conflicts between tribes and clans over water sources and the livestock have always existed in these areas but have become more violent because the areas are becoming more water stressed and organised crime is mixing with the parties. Since ten years, the Kenyan government and water sector are decentralising decision-making and planning in order for the situation to be handled locally. However, in many cases only paper tigers are created because capacities are simply not on the ground. Of the about 120 Water Resource Users Associations that were supposed to be created in Marsabit county, only 2 are functional. The Water Services Board, based in Garissa is supposed to oversee the performance of the water provider hundreds of kilometres away in Moyale at the border with Ethiopia, but is not even able to visit the area. New hopes are put on the recent constitutional decentralisation with the creation of counties with political and administrative powers, but this still has to prove itself.

This Kenyan Arid Lands project (KALDRR-WASH) with funds from Dutch and US governments aims to build the resilience of the population and the local government by making better use of the potential for water storage and improve the skills for water service management, making people less dependent on foreign (emergency) aid and government subsidies. Key in this strategy will be to find the balance between the rich governance traditions from the region and modern values of equity and democracy from the globalising world. To ensure that the new highway to Moyale will not only draw Mwende's children out of the desert to the city, but will help to sustain their lives because safe water nearby is not only a right but a given.