Report of a WASH Dialogue on faecal sludge and septage management Is Faecal Sludge and Septage Management (FSSM) an effective and long-term solution in the sanitation value chain? That was the question that Indian sanitation experts reflected on in Jaipur, the state capital of Rajasthan, at a multi-stakeholder dialogue on 'FSSM Matters: Looking Forward' on 10 January 2017. The dialogue was the second of the "Insights" series launched last year by the India Sanitation Coalition (ISC), IRC and TARU Leading Edge.

Mr K.K. Sharma, Chief Engineer at the Local Self Government Department (LSG) of the Government of Rajasthan, started the discussion with a presentation on the ‘Swachh Bharat Mission - Urban Rajasthan’, which covered:

A panel discussion followed on the relevance of FSSM in the present scenario and the subsequent need for a collaborative framework and cross learning.

Speakers highlighted that FSSM has gained importance since only a small percentage of households in urban areas are connected to sewerage and most households have on-site sanitation systems (such as septic tanks, pits and large holes). Without an institutionalised emptying system for onsite sanitation, effective wastewater management and the elimination of open defecation are difficult to achieve. The Ministry of Urban Development, Government of India (GoI) included FSSM as a key component under AMRUT, the Atal Mission for Rejuvenation and Urban Transformation. This programme benefits only the larger cities, while the smaller ones are being left out. It is crucial that the governments look beyond containment, which is the current focus under the Swachh Bharat Mission (SBM), and give equal importance to FSSM.

Mr Depinder Kapur from the National Institute of Urban Affairs (NIUA) said that FSSM should be a part of every city sanitation plan. Each organisation has a special role to play in addressing the existing challenges in the sanitation value chain management. He argued that engagement with local government is the most critical part for FSSM, since state specific strategies are guided by their funding and policies.

Mr Arumugam Kalimuthu from the WASH Institute stressed the need to develop a complete value chain which covers containment, emptying, collection and treatment of sludge. ULBs need to budget for enforcement of regulations on service delivery. The WASH Institute has submitted that policy guidelines for FSSM to the Government of India.

Ms Anju Dwivedi from the Centre for Policy Research (CPR) shared two important successes achieved under the partnership project with the State Government of Odisha after a yearlong process of discussion and orientation for policy changes. These were the formulation of a comprehensive ‘Urban Sanitation Strategy’ and the ‘Waste Water Disposal and Management Law’.

To keep cities open defecation free (ODF), the state government of Maharashtra is focusing on the entire sanitation chain for which it introduced the concept of ODF+ and ODF++ cities, said IRC Board member Meera Mehta from CEPT. This involves proper emptying and treatment systems and giving cities financial incentives. Further, involvement of the private sector in FSSM services is being explored in a few cites. Ms Mehta emphasised that FSSM should become a regular service like water services and operate a scheduled service as in countries like The Philippines. Service level benchmarking (SLB) for monitoring and measuring a service provider should be made a norm in FSSM. She highlighted that every state should have a sanitation policy in place, should identify areas for capacity building and give importance to data indicators.

Ms Aparajita Gogoi, working with PSI, shared the organisation's efforts in Bihar state to convince the local government that FSSM is a suitable alternative to sewerage in peri-urban and urban areas. She said that implementing FSSM requires a strong collaborative framework.

Mr Manas Rath shared the successful technology-based STP model being set up by the Consortium for DEWATS Dissemination (CDD) Society in smaller cities. He suggested that while it is important to choose a modular technology, which is flexible to adopt for efficient FSSM, other key components deserve attention as well. These include operation and planning, choosing a closer location to cut transportation costs, capital financing and costs for operation and maintenance. Besides making people aware about the importance of sanitation and the need for treatment plants, it was critical to create an efficient and smell-free treatment system for greater acceptance. He said that FSTPs should be approached as a long-term, holistic and an end-to-end solution, because, on the one hand to accommodate for population while on the other taking advantage of the fact that the cost of FSTPs is minuscule compared to that of sewerage systems. Public financing for STP in smaller towns, which are not included in AMRUT, is an issue. However, ULBs have access to funds provided for by the 14th Finance Commission and they can make use of Public-Private Partnerships (PPPs) and levy user or sanitation charges. Mr. Rath stressed the importance of making solutions technology-savvy and marketable, the involvement of local stakeholders and greater public participation. The business model should be inclusive, involving manual scavengers, rural masons and members of ULBs. 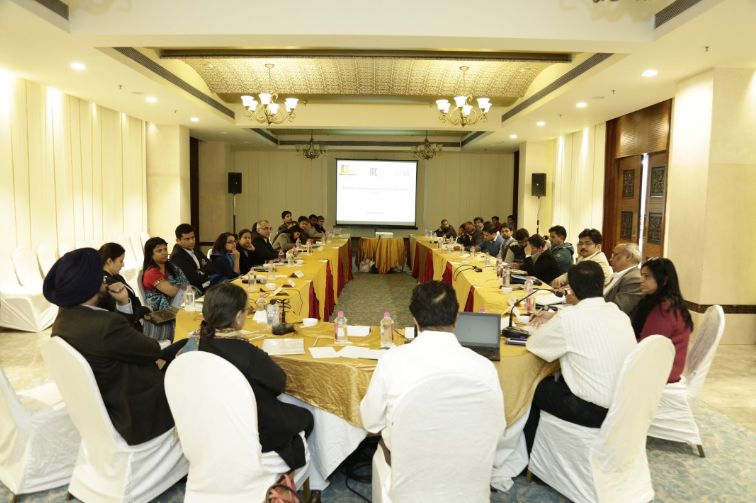 During the plenary, the lack of monitoring systems for septic tank construction, hassles in periodic desludging and poor wastewater management were discussed. To ensure sustainability, FSSM should be incorporated in urban planning and infrastructure development. Demand creation among stakeholders is needed to make government more responsive to FSSM.

Participants felt this platform to be a great source of learning on the relatively new area of FSSM. Mr K.K. Sharma said he would propose to the Government of Rajasthan to draw on the lessons learned by CDD to set up STPs in cities with a population of less than 100,000.

The forum brought together representatives of the Directorate of Local Self-Government and the Rajasthan Urban Infrastructure Development Project (RUIDP) and several experts from the development sector, including the World Bank, WaterAid, IPE Global, WASH Institute, Cairn India and NFSSM Alliance in addition to PSI, CEPT University, NIUA, CPR and the CDD Society.

This blog has been published as a briefing note in the Insights series.

IRC has developed a Faecal Waste Flow Calculator. Learn more about the calculator and other IRC sanitation tools at www.ircwash.org/tool-subcategory/sanitation.