An unholy alliance of right and left

RT @sanwatforall: #Happened at the #2022SMM - We're proud to announce that the Government of #Ecuador is joining the SWA global partnership…

In this blog Patrick Moriarty reflects on Stockholm World Water Week 2014. There is good progress in language (and some tools) around the role of government in delivering services, he argues. But it's still an uphill struggle on who pays for what.

My nomination for quote of the World Water Week – or the three days I was there – came from The World Bank's Water and Sanitation Program (WSP) always original Dominick de Waal. Summing up the reason that WASH is in such a lamentable state, he said it was because of "an unholy alliance of right and left". By which he meant the view from the right that government is the problem, structural adjustment and markets the solution, and from the left that government is the problem and community management the solution. 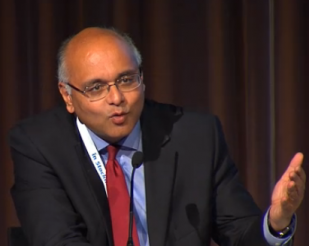 In both cases, the result has been more than a decade of trying to provide WASH without bothering much about involving government – resulting in the broken down infrastructure and lousy services with which we're all familiar. It's a great quote, and it is a nice hanger for the generally positive feeling that I got from Stockholm where out of the usual babble of the WASH sector talking to itself, a message of change seems to be discernible. Government is – if not exactly sexy – at least being seen as part of the solution rather than a problem to be worked around.

Dominick made his intervention during a lively Sanitation and Water for All (SWA) "marketplace" on innovations in sustainability during which strong support for government was expressed from incoming World Bank Global Practice Head Junaid Ahmad as well as long time government champion Sanjay Wijesekera of UNICEF.  My feeling, at least from the sessions I attended and conversations I had was that the conversation is shifting in a very positive direction – one that IRC has been lobbying hard for over the last 5 years.

That said, there's still a long way to go. As I said when talking to the Guardian's Eliza Anyangwe, until the major donors find a way of financing WASH that actively encourages the promotion of services – and the enabling environment (especially local government) necessary to sustain them over time – the sustainability challenge won't go away. In this context, DGIS' sustainability clause, and the tools such as UNICEF's compacts that are being developed to support them, are a big step forward and are helping to move the dial. The clauses by squarely targeting at the sustainability of services; the compacts by clarifying government's commitment to ensuring sustainability. The use of the clauses, and UNICEF's WASHBat analytical tool were discussed during another good session, on sustainability put on by UNICEF.

I also came away with the feeling that there is still a lot work remaining to be done around talking money, which in (rural) WASH meetings continues to be somewhat challenging. Everyone's keen to discuss the latest funky tech – or the need to "build capacity" – or "create a regulator" ... or whatever the good idea is. Far fewer (outside of the WASH as business community) have any idea how much the tech will cost to roll out – or who is going to pay for new capacity over time.

Innovations in Sustainability for Water and Sanitation Services

Sanitation and Water for All session

Beyond Asset Management: Sector Analysis and Partnerships for Sustainable Service Delivery in WASH

Priceless! Uncovering the real costs of water and sanitation