Understanding how shit flows in a resettlement colony in Delhi

With rapid urbanization and the development of large infrastructure in Delhi, came the demolition and resettlement of unauthorised slums/colonies within the city.

This blog has been written by Ruchika Shiva and Mohammed Shehfar

The people living in these areas were allotted land in resettlement colonies. These colonies are mostly on the peripheries of the city with little or no civic amenities provided.

The resettlement colonies in Delhi, 55 in all, are home to 1,776,000 people, which is more than 10% of the urban population in Delhi (Delhi Population 16.7 million, 2011). Interestingly, Delhi’s resettlement colonies are managed by three government agencies that look at different aspects of the sanitation chain. One looks at the construction and maintenance of sewer lines across Delhi (Delhi Jal Board), the other is responsible for construction and maintenance of community toilets and the construction of drains in residential areas (Delhi Urban Shelter Improvement Board) and lastly one agency maintains the drains and manages solid waste.

We visited one such resettlement colony to get a better understanding of conditions of household sanitation facilities and how the faecal waste moves along the entire sanitation service chain.

Open defecation has been the preferred option because of the lack of household toilets, and opening times, maintenance and security in community toilets. This, however, has changed in recent years, with an approximate population of 14,000 families in the colony visited, it is estimated that about 75% now have a toilet, as compared to around 5% of households less than a decade back. There are, however, still a number of challenges particularly with respect to space (house area 12 and 18 square meter), tenure of land, and managing the faecal waste beyond capture and containment.

Increasing numbers of households have built their own toilets in the absence of a sewerage network. The majority of these toilets are connected to open storm water drains along the streets. About 20-30% of households have invested in building underground containment or storage tanks. Although most residents refer to them as septic tanks, it is essentially a holding/collection tank where the faecal waste is stored. The households will have to employ tank emptying services when tanks fill up. In a few cases social pressure from neighbours worked as a trigger for households to opt for emptying services rather than connecting the tank directly to the open drain. 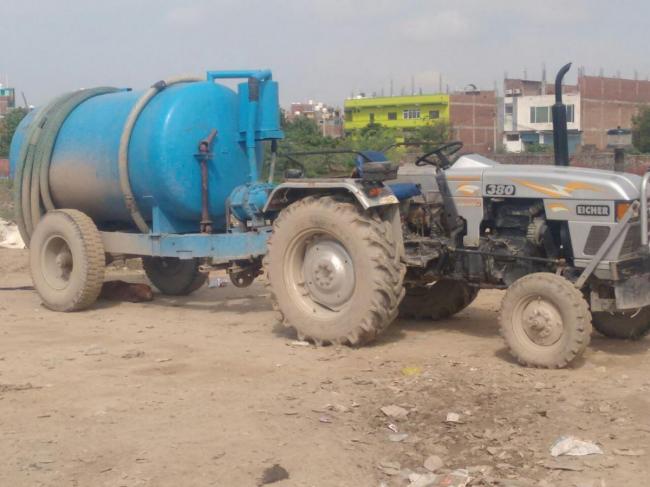 The tank/pit emptiers, in the area visited, are mostly small scale private entrepreneurs who have invested in a tractor, tank and pump for removing the faecal sludge. These entrepreneurs are contacted directly by the households when the tank is full. The faecal waste, mostly the black water, is removed from the tank and then dumped in the nearest water body such as river canal, river, drainage channel, pond or abandoned mining sites, further contaminating the common water resources and also increasing health hazards to the local communities.

Solids cannot be removed due to the nature of the equipment used by the entrepreneurs. As a consequence tanks fill up overtime, as solids accumulate in it, reducing the storing capacity of the tanks. This means that manual pit emptiers have to be employed to empty the solids or faecal sludge from the tanks. This is done by pouring salt in the tank, leaving it for some time and loosening the sludge with their legs. The softened sludge is then removed manually with the use of a bucket and a rope. The manual pit emptiers do not like to speak about their work openly because of shame.

Crowded urban, predominantly poor, localities make up 45% of the city’s population. In the absence of an adequate system to empty, transport and treat the faecal waste from onsite sanitation facilities, the indiscriminate and highly dangerous disposal of faecal waste into the water systems needs to be stopped. Solutions can only be explored after a full understanding of the activities of the different actors involved along the entire sanitation service chain has been obtained. This includes an assessment of the policy and legislative framework that governs all the activities along the chain.

It is unlikely that there are quick fixes given the multitude of shortcomings of the current system. Appropriate and functioning faecal waste or sludge treatment facilities need to be in place, small scale private entrepreneurs need to be regulated and encouraged to bring the waste to these treatment facilities. Alternatively, and depending on the distance to the treatment facilities, decentralised transportation systems can be put in place. This means that entrepreneurs, with equipment that allows for only small volumes to be transported, deliver the collected faecal waste to a transfer station at a point not too far from their service area. The waste is then collected from the transfer station and transported to the final treatment facility by a public service provider using large capacity transport equipment such as a tanker truck.

The biggest challenge, however, is the increasing number of toilets directly connected to storm water drains. City authorities have to put in place supportive legislation and enforcement measures such as building codes, licenses and so on. At the same time they need to ensure that existing malfunctioning facilities are replaced.