Can CSOs improve allocation to water and sanitation through budget tracking

Zobair Hasan (DORP) tries to convince local governments to allocate more funds to water and sanitation. He shares his insights in an interview.

June was ‘budget month’ in Bangladesh! This was an important month for Zobair Hasan, Chief of the Research, Evaluation & Monitoring department at the Development Organisation of the Rural Poor (DORP). DORP is an NGO focusing on action research and advocacy in Bangladesh’s rural WASH sector. In budget month the government develops the new budgets for the coming year. Zobair’s main job is trying to convince the Local Government Division within the Ministry of Local Government, Rural Development and Co-operatives (LGRDC) to allocate more funds to water and sanitation. He does this with technical and financial support from Simavi.

Zobair advocated for an increased WASH budget on TV and in public debates. But in order to make his point, he first had to get the facts on the table: how much is the Bangladeshi government actually investing in water and sanitation? I interviewed Zobair about his experiences with tracking WASH budgets in Bangladesh.

How did you go about the WASH budget tracking in Bangladesh?

“We started tracking WASH budgets in 2010 in six Upazilas [sub-districts] by collecting data on capital expenditure and recurrent operation and maintenance costs. The budget tracking initiative was focused on budget allocation and utilisation at the Union Parishad level. Union Parishad is the lowest level of the local government; its members are elected by the community and the Union authorities respond directly to the community in their area.

“The money for WASH provided to each Upazila from the Ministry of Local Government, Rural Development and Co-operatives (LGRDC) is disbursed amongst the Union Parishads, based on each Union’s submitted development plan. However, given that resources are limited, civil society organisations (CSOs) within each Union Parishad must present strong cases as to why their particular area should receive their required amount. 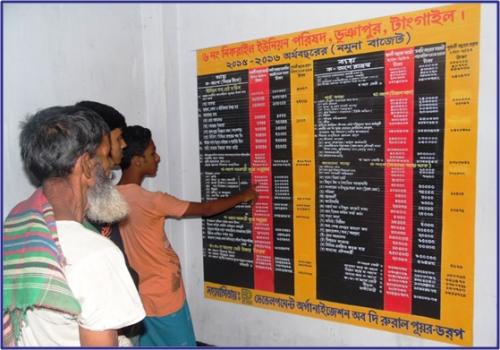 "We strongly involve local CSOs and communities in the data collection process to enhance their understanding of the budget process. They are the ones collecting the budget data every quarter and then discussing the allocation and utilisation of the budget with the local authorities. If the allocation for water and sanitation was less than expected, the CSOs address this issue with the Union Parishad Chairman and Upazila authority. Despite the financial pressure, the absolute amount of WASH budget has increased in all six Upazilas where DORP worked. In three of these Upazilas, however, the WASH budget as percentage of the total budget decreased due to changes in the total budget (see DORP's fact sheet for data).

“We also invited government representatives to several events, such as the pre-budget dialogue, the open budget dialogue, public hearings and the Upazila stakeholder’s dialogue which keeps communities informed about the governments’ commitments on investment in water and sanitation services. At these events, the communities also had the chance to voice their needs and demand that the government set certain budget priorities.”

“One of the results of the budget tracking is that we found out that there is a big gap between what the government should have spent on water and sanitation to meet the Millennium Development Goal in Bangladesh’s rural areas (240 BDT/€2.68 per capita) and what they are actually spending (40 BDT/€0.45 per capita). These findings formed the basis for our campaign to lobby for an increased WASH budget. We have not yet done the financial gap calculation for the Sustainable Development Goals.”

What challenges did you encounter in the process?

“Before 2009, it was quite difficult to collect information about water and sanitation expenditure, because we didn’t have a legal basis to request budget information from the government.

“The Right to Information Act, adopted in 2009, has made it easier to access budget information from both the government and semi-government institutions. Still, it takes a lot of time (sometimes 6-12 months) to collect the data and it is very difficult to obtain recent consolidated data from the national government. The data for each district’s budget for different sectors like WASH, health and education in line with the fiscal year is still unavailable. We have to consult the Revenue and Development budget within each Ministry’s budget book to get access to these data. Another challenge is that the government doesn’t provide budget data per capita. So we have to divide the total allocated budgets by the estimated total population of a Union.

“A big problem in Bangladesh is that the disbursement process is very slow. The Union Parishad receives its budget from the Upazila authority, who in turn receives it from the national government. But sometimes the Union Parishads only receive their budget at the end of fiscal year, which makes planning and investments extremely challenging.”

Which changes have you seen as a result of budget tracking?

“Directly addressing the needs of communities is also being done via the WASH Desk initiative that we set up. We convinced 25 Union Parishads to set up ‘WASH Desks’ in their offices. At these desks community members can write down their complaint in a registrar book, for instance if a tube well or toilet broke down. Once a week a local tube well mechanic gets this list of complaints and visits the households to do the repairs. This WASH Desk also serves as an information desk where community members get WASH-related information, e.g. regarding water testing, installation of latrines, etc

“It is interesting to see that government officials, and particularly the elected ones, have started to notice that they benefit as well if they incorporate the needs of their community in the budget. After only two years of implementation of our project, we started receiving requests from other Union Parishad Chiefs to assist them with their budgeting process for water and sanitation.”

For some of the latest results from DORP's budget tracking for water and sanitation in Bangladesh, have a look at their fact sheet.

Can CSOs improve allocation to water and sanitation through budget tracking