How a story about an Indian sanitation entrepreneur became a hit. 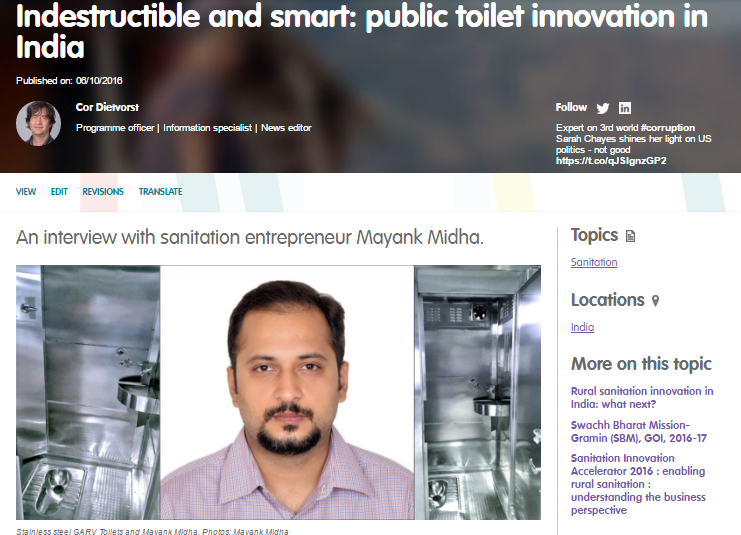 These are good times for sanitation entrepreneurs. Especially in India, where the country’s leader, Narendra Modi, has put his full weight behind a national campaign to eradicate open defecation by 2019. So, I was excited when I got a chance to interview a young and upcoming social entrepreneur Mayank Midha. In September 2016, he won the Sanitation Innovation Accelerator 2016, an initiative of Ennovent, IRC and TARU Leading Edge.

In preparation for the Skype interview with Mayank, I sent him a few questions beforehand. The first question was: what spurred your interest in sanitation?  His answer gave me an excellent human interest introduction to his story: he recalled how his mother and sister suffered during long distance journeys in India because there were hardly any decent public toilets on the way.

Mayank spoke with enthusiasm and authority about his innovative business concept for indestructible, smart public toilets. It was easy to imagine why the jury of the Sanitation Innovation Accelerator awarded him first prize.

Mayank's interview attracted over 1,000 page views within 4 days after publication on 10 October 2016. No other IRC web item has attracted so many views in such a short period. The majority of these views were generated by Mayank’s followers after he posted the link to the interview on his Facebook page. This shows how important communication “amplifiers”, such as social media users, are in promoting messages.

When researching Mayank Midha and his GARV Toilets startup, I didn’t come across any previously published interviews or features about him. After the interview appeared on the IRC website. Mayank's star began to rise. The Water Network interviewed him, he featured as a member of an expert panel in The Guardian, NDTV praised GARV Toilets as one 5 innovations "that can change the face of sanitation in India", VIA Water announced that Mayank was one of the winners of their Innovation Challenge and the BBC featured GARV Toilets in an article about "the future of the bathroom".

A prize winning, young social entrepreneur with a smart innovation makes a good story, which people like to read. This will surely help Mayank attract investors to build his business? Not so fast, warn mWater co-founders John and Annie Feighery in a recent blog "Beyond prizes, hackathons, and contests: Better ways to support innovation in international development". Maybe Mayank's business model is so good that it doesn't actually need prizes and free publicity. We shall see. Mayank has agreed to a follow-up interview in a year's time. Hopefully, you will read an even better story than the one I wrote in October 2016.

This blog is part of a series on Celebrating IRC Communications that was produced for a special issue of E-Source. For the other articles in this series see the Useful Links below.

The power of photo stories in Ethiopia