During a field visit we observed some seriously big and fancy toilets in a rural village.

The question that popped up was: are toilets in rural areas of Cambodia becoming the new national status symbol and thereby replacing the Lexus luxury vehicle?

The second day of the regional learning event on sustainability organised by the Ministry of Rural Development and SNV Asia in Cambodia was used to visit rural districts that are part of the Sustainable Sanitation and Hygiene for All (SSH4A) programme. Now this was not my first field visit in Cambodia. I have visited a number rural sanitation programmes in the past and over the past six months I had the chance to go on four different field visits as part of a sanitation market research assignment. But I have to say I was astonished with what I saw today. I was able to witness a toilet under construction that is as big as a decent sized bedroom and that includes a tank that can hold some 2000 litres of water. The water storage tank had the proportions of an Olympic size bathtub. 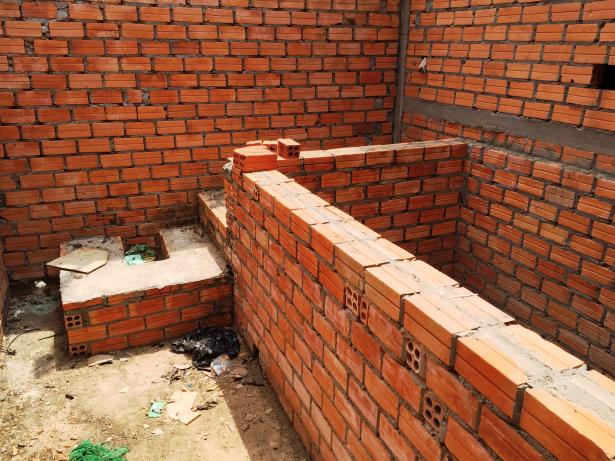 Now you may think that such a toilet is a rarity in rural Cambodia. I am not fully convinced that this is so. The sanitation market research, conducted in the three Stone Family Foundation funded SSH4A districts, had already shown that the average amount families spent on a toilet is some US$ 350! A staggering amount especially when you consider that some 20 to 25% of families are identified by the government as poor. In the village we visited all families were using a toilet with 6 families out of a total of 170 families not yet owning a toilet and using their neighbour’s or relative’s toilet. Except for one all toilets were improved pour-flush toilets most with double pits.

It seems the bar has been set really high in those villages. It may not come as a surprise but during the research we discovered that early toilet adopters are households that are financially better off and opt for high-end expensive toilets. These families are setting a standard that may not be viable or an option for all families. As a consequence the aspirations expressed by the non-adopters are bigger than the size of their wallets. A vast majority expressed that they do not have enough money to construct their dream toilet at an estimated cost of US$ 400 as they believe they can only afford some US$ 100. Most households therefore decide to delay the construction of a toilet until they are able to construct a “good” toilet. It is very unlikely that poor families will be able to afford their dream toilet. The research revealed that poor families had spent on average only US$ 69. When using the 2014 CSES (Cambodia Socio-Economic Survey) annual disposable income figures, the lowest wealth quintile would have to spend some 70% of their annual income, way above international benchmarks, to construct a “simple toilet” at a cost of US$ 150.

So where does this leave us? How do we move forward? And more importantly how can we support the poorer families to make sensible decisions? Dreaming of purchasing a Lexus four-wheel drive vehicle can be a nice pastime, but if you do not even have enough money to buy a bicycle then this is frustrating and it will not really help you move forward. What can the programme do to tone down these sometimes unrealistic expectations and ambitions so that everybody – and not just the “rich” – can enjoy the comfort and privacy of a toilet?