The threat from salt water in Bangladesh – we may have been here before: 8,000 years ago

"We can see that what was happening six or seven thousand years ago is still affecting what is happening in the subsurface from a salinity point of view. If you want to know what is happening now, you have to go back in time and try to understand how the groundwater system works," says Oude Essink

In June 2013 a World Bank report named Bangladesh as one of the countries in South Asia most affected by an expected 2°C rise in the world's average temperatures, with rising sea levels and more extreme heat and intense cyclones threatening food production, livelihoods, and infrastructure.

One of the largest deltas in the world, this is a fertile area criss-crossed by rivers and streams but vulnerable to floods, cyclones, droughts and erosion. The report warned that 20 to 30 years from now, shifting rain patterns could leave some areas under water and others without enough water for power generation, irrigation or drinking. The worst cyclones could expose 9.7 million people to more than 3 meters of inundation.

To counteract these threats, a Bangladesh Delta Plan (BDP 2100) has been launched by the Government of Bangladesh, backed by the Netherlands, to consider how to develop water, land, agriculture, public health, water safety, food security issues over the next century. One acute problem is salt water intrusion in some coastal areas where many shallow wells have become unusable. There are fears that both groundwater and surface water will become increasingly affected by salt as sea levels rise and fresh surface flows towards the sea reduce where population pressure leads to higher levels of abstraction. Salt is not the only problem making it difficult to find clean fresh water: many tube wells in areas near the coast are also affected by arsenic. 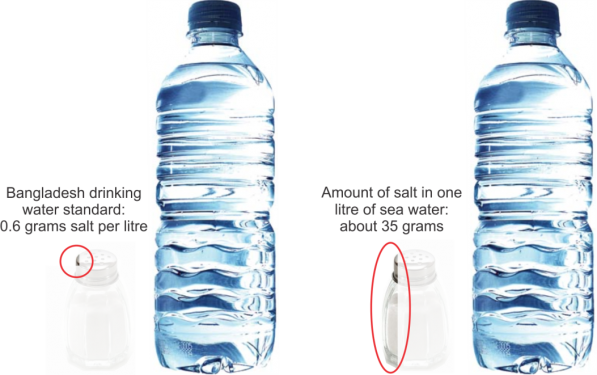 If the standard is exceeded water tastes unpleasantly salty; at higher levels it is undrinkable. Over a prolonged period, high salt intake is associated with hypertension which carries a higher risk of stroke and diabetes. And while rice grows well in water with a salt content of up to 2 grams per litre, at higher levels crops are seriously affected.

The BRAC WASH programme in Bangladesh is providing integrated hygiene, sanitation and water services to millions of people in rural areas of the country. In these southern areas, the water element has mainly focused on finding alternatives to arsenic affected water. However, during the second phase (2011-2015) a number of innovative action research projects were funded by the Embassy of the Kingdom of the Netherlands (managed by the international NGO IRC), focusing on low cost sanitation technology in difficult areas and the safe final disposal of human waste. One such innovation, the SWIBANGLA project, undertaken by the Netherlands-based research institute Deltares, UNESCO-IHE and Jahangirnagar University, addresses the impact of salt water on drinking water supplies. Lead consultant Dr Gualbert Oude Essink, from Deltares presented findings on September 2, 2014 at the Bangladesh Department of Public Health Engineering (DPHE) that challenge simplistic thinking about salt water intrusion simply being a factor of present-day sea levels.

In Bangladesh, and elsewhere, salinization is a highly complex process of intrusion into surface and ground water, seepage through thin geological structures into shallow pockets of freshwater ('lenses' is the technical term), up-coning towards abstraction wells (think of the surging motion of a lava lamp) and salt water intrusion after floods caused by storm surges. When groundwater extraction increases, salt groundwater can be sucked up from depths. In the coastal zone, infiltration of saline surface water from tidal marshes and unprotected canals adds to the problem. Depending on the local conditions, it may take up to 16 years for fresh water to 'flush' salt out of groundwater reservoirs– the monsoons accelerate this flushing process so long as more saline surface water does not infiltrate. 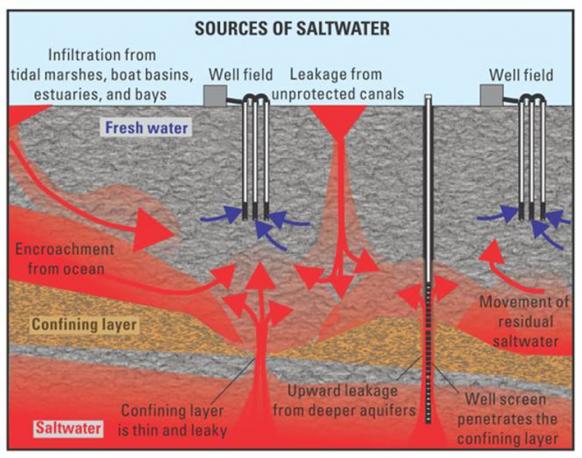 Combination of processes by which salinization can occur. Graphic by USGS, Scott T. Prinos, 2013

More surprising is the news that water contained within deep aquifers (50 metres or more), deposited million of years ago, also contain salt. The salt in these deep waters is not evenly spread in the coastal zone of Bangladesh. It turns out that many thousands of years ago sea levels rose in the Bay of Bengal depositing salt groundwater and then retreating as sedimentation raised land levels. Climate change is indeed an impending disaster, but rises and falls have happened many times before.

Oude Essink said, "We can see that what was happening six or seven thousand years ago is still affecting what is happening in the subsurface from a salinity point of view. If you want to know what is happening now, you have to go back in time and try to understand how the groundwater system works."

SWIBANGLA has been putting together the data on hydrology and geology and human groundwater extractions. Some of the most valuable has come from the deep wells provided by the BRAC WASH programme. These are often in difficult areas affected by arsenic where the government services do not reach. Water from these well is indeed free of arsenic, but sadly, reports Prof Khairul Bashar from Jahangirnagar University, in some areas 31% of these wells exceed the Bangladesh standard for salinity. When BRAC WASH reported these findings back in communities the local people begged them not to close the wells as they are still a better option than surface water.

What can be done to protect drinking water? 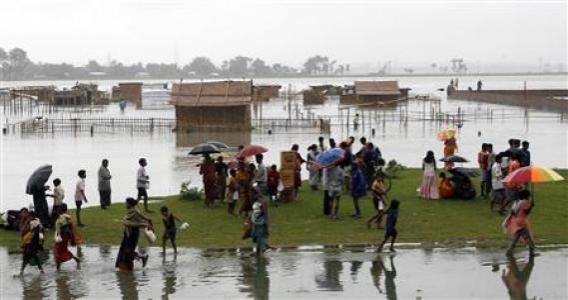 SWIBANGLA has laid plans to monitor salt levels in groundwater, issue early warnings and reduce abstraction when salinity levels start to rise. It has also listed possible mitigation policies for inclusion into the Water Safety Plans. The most radical –sometimes only- option is to inject fresh water in times of plenty down into deep aquifers where they can be stored and protected, and then pump the groundwater up again when needed. There are various "go-fresh" options to store water in the subsurface where it can be better protected from pollution, evaporation and salt water intrusion. Some of these are planned or already being introduced by UNICEF, the DPHE and Dhaka University.

SWIBANGLA researchers believe that effective mitigation strategies can only be drawn up when a clearer picture emerges and Oude Essink says that years of monitoring are needed to turn single points of data into time series, showing dynamic changes in water salinity.

SWIBANGLA already has products: a first set-up of a 3D numerical model to estimate future areas of increased salinities; a water quality monitoring kit; and an ECApp smart phone app to measure the electrical conductivity of water which is a good proxy for salinity.

Not all knowledge comes from high tech innovation. From his work in the Netherlands Oude Essink knows that farmers are often experts in understanding the changing patterns of water salinity and possible solutions and the same is true in Bangladesh. Researchers found great interest from local people when they started monitoring salinity levels. "The farmers and local water managers know how the salt water is interfering with the precious fresh groundwater systems. You cannot make a proper numerical model without that sort of knowledge. It is essential for us."

However, the SWIBANGLA model is not without critics Abdun Noor, a senior hydrologist in the DPHE Groundwater Division, says the hypothesis about salinity being laid down many thousands of years ago does not square with local experience in the south western district of Satkhira where wells that were fresh 25 years ago have turned saline. He said that people needed answers today on how to protect sources. "We need practical solutions. There are many models and they do not give any simple answers or conclusions that can be accepted by stakeholders."

Oude Essink and Professor Bashar accept that action is needed, but believe that the salt being upconed into these wells is thousands of years old, that the process has been accelerated by increased extraction, and that simple answers may not be feasible. They insist there is no substitute for time series data. Oude Essink said; "Before mitigation and suggesting solutions, you need to know what the problem is and understand how the system works." The team is looking for new sources of funding to build an open source data base, with clear maps and graphs on a public website and an annual meeting of a network to discuss results.