What the shit is WASH doing about waste?

Health and safety of sanitation workers on the line

Is there a sustainable business case for sanitation?

The business case for sanitation in developing countries is testified by the thousands of small scale entrepreneurs springing up to tackle problems of open defecation and process faecal waste and urine. Will these businesses be profitable and sustainable? 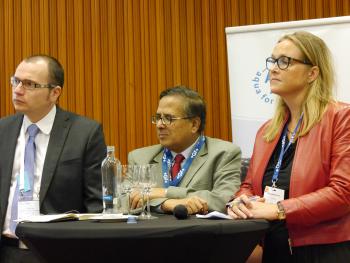 The evidence from an event at the International Water Week leading up to the Sarphati Sanitation Award was mixed. The workshop Making Sustainable Business out of Sanitation, showed a high level of innovation and enthusiasm for businesses to address two of the most intractable public health and environment issues of our age – the 2.5 billion people who don't have access to safe hygienic toilets and sanitation, and how to deal with human waste.

Uschi Eid, Vice chair of the UN Secretary General's Advisory Board on Water and Sanitation, in her keynote address pointed to the urgent need to make a connection between sanitation, human rights, the environment, social development and the economy. She said that the 2.5 billion who lacked sanitation represent a huge potential market. "Most are willing to pay something for a toilet which translates into huge opportunities for local entrepreneurs."

The four initiatives showcased at the workshop seek to exploit the potential to turn a problem into an opportunity by generating providing toilets and generating fertiliser and biogas or electricity, but none is yet profitable.

SimGas seeks to tackle the problems of sewage, indoor air pollution and energy shortages through mass production of household treatment plants that produce biogas. With a new factory in Dar es Salaam and plans to expand into Rwanda, Uganda and India they are the biggest biogas equipment producers in East Africa, working with local groups to produce 10,000 units over the next five years for use in Kenya and Tanzania. Families who pay US$ 300 - US$ 500 for a unit can expect to recover their cost in 12-18 months. However, Sanne Castro, founder and CEO, said that SimGas needs to triple its monthly sales to be profitable.

SANERGY, who won the prestigious Sarphati award, run a franchise system for toilets in the slums of Nairobi with 275 franchises and 11,000 paying customers a day. SANERGY seeks to break even on the toilets and to make its profit from fertiliser products and by generating electricity at a central plant. Currently SANERGY collects 1,100 metric tonnes of faecal sludge a year and will be profitable when they can collect 5,000 metric tonnes. Ani Vallabhaneni, co-founder of SANERGY, is very confident that they will achieve this. "This is about solving what has been seen as an unsolvable problem and providing people with their basic human rights."

FINISH – (Financial inclusion improves sanitation and heath) is providing 4,000 household toilets a month in India with safe disposal. The 8,000 rupee cost is financed through a mix of family payments (3,400 rupees), a government subsidy (4,600 rupees) and in benefits from suppliers who provide materials on credit. FINISH is now looking to turn the waste into fertiliser and biogas. Vijay Athreye, founder of FINISH, said that a long-term approach was needed to generate demand and behaviour change.

SuSan Design from Norway is working with communities in Kampala where women in slum areas helped to shape a design of a urinal for women that leads into a container which can be kept at home without smells. The urine is collected for use in the flower industry and by commercial farmers around Kampala. This will become profitable when they have 10,000 units in one area so that collection can be done at scale.

Can scaling up be managed by profit alone?

A recent IFC/WSP report found that in Bangladesh, Tanzania, Peru and Indonesia there was already a US $300 million a year worth of business being generated in sanitation. However, Jemima Sy, from WSP, one of the co-authors said that the markets were dominated by small players with fewer than five employees.

Babar Kabir, Director of the BRAC WASH programme in Bangladesh said it was difficult to see how to scale up such businesses to match the size of the challenge. "In the first phase we provided access to improved and hygienic toilets for a population size larger than the Netherlands itself – 25 million people, so we reached about five million toilets in five years." A feasibility study into converting human sludge into biogas and fertiliser was looking at dealing with 6,000 tonnes of sludge a year.

Scaling up, sustainability and meeting the needs of rural areas emerged as key challenges. Radu Ban from the Bill and Melinda Gates Foundation said that they could not wait until entrepreneurs could make money from the rural sanitation business as this is a public service. "We don't just want to encourage the private sector and let the government off the hook. If you think about how these services are delivered in developed countries it is not always a private sector money-making institution. There is a business case but the business case is in reducing the costs of delivering the services."

Jack Sim, who founded World Toilet Day, said they should not only look at the financial bottom line. "You are all struggling to calculate how much money will be returned. If you calculate the externality of the impact then I think all the presentations make money. It is creating jobs, it is saving people from diarrhoea, and it is cutting health costs, why don't you price that?"

The WSP study showed people without improved sanitation were not necessarily the most poor – Jemima Sy said that 65% lived above the poverty line. "The poor people we interviewed had mobile phones. It tells us that if it is valuable they will pay for it, especially if they can make the payments over time as you do with a cell phone."

The organisers are now planning a match-making event in April 2014 to bring together entrepreneurs and "open-minded funders". They are looking for input and ideas – contact thepoopotential@gmail.com

Peter McIntyre, freelance, writer, journalist, editor, consultant and trainer. Peter researches, writes and edits mainly on water and sanitation, health and development. He is currently consultant to the BRAC WASH project in Bangladesh supporting their communications work and providing training, and was for five years consultant to IRC's WASHCost project.

Making Sustainable Business out of Sanitation was organised by Aqua for All, Waternet and the Netherlands Water Partnership under the banner Sanitation for All – the Drive to 2015 on November 5, 2013 as part of International Water Week. Watch the video recordings below.

What the shit is WASH doing about waste?

Health and safety of sanitation workers on the line