Toilets For All Seasons - Innovating for Sustainable Sanitation in Uganda.

Here we look at shared sanitation at the national, district, and household levels in Ethiopia, and why it should not be overlooked by the SDGs.

Behind a newly-erected corrugated metal fence in kebele (sub-district) #03 of Woliso woreda (district), Ethiopia, stands a sturdy cement building painted deep green. Located in a densely-populated area, its dark exterior provides a striking contrast to the enclave of brightly coloured houses surrounding it. The building’s six separate doors lead to clean, recently-emptied latrine pits. Standing in front of it, it was so clearly well-maintained that I thought it had just been built. But I learned that Yirgalem Zewude, a local resident, has actually been managing this communal latrine for over 10 years. 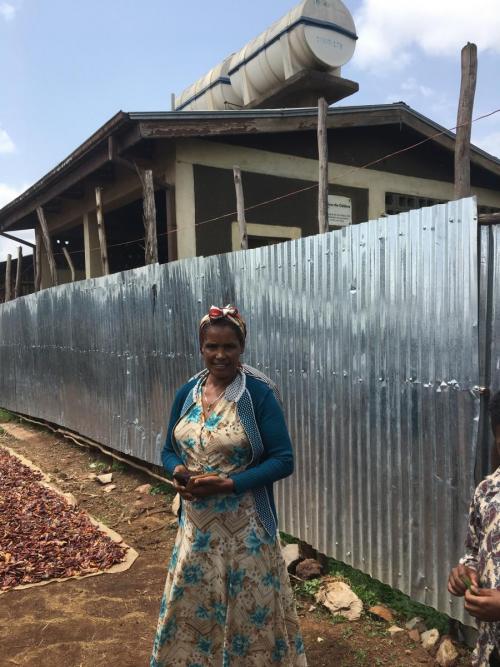 Shared latrines like these are often the only viable way to provide sanitation services in areas where housing and people are so densely packed together; they can also be managed safely and sustainably. However, the indicators published in the newly released Sustainable Development Goals Baseline Report by the Joint Monitoring Programme (JMP) for Water Supply and Sanitation by WHO and UNICEF do not count improved facilities as “basic” if they are shared between more than two households. This leaves behind informal and densely-populated communities where shared sanitation may be the only viable service delivery option, like for Kebele #03. Though this is an advancement on past categorisation, the effort did not go far enough – not counting these sanitation service users has implications beyond not just meeting the benchmarks established by the JMP.

In all aspects of international development, high-level, sector-wide goals tend to drive national priorities and definitions of progress. The Sustainable Development Goals aligned government and donor organisation priorities by setting targets for universal, safely managed sanitation. But, considering sanitation services are so complex, what should be prioritised to make progress towards the SDGs? Can JMP indicators for the SDGs such as the number of users reflect how safely a facility is managed, or how sustainable it is?

Global indicators of basic sanitation services need to be broadened to establish a driver for equitable, sustainable services. Thus, as practitioners, influencers, and policy makers we must actively reflect on how these defined service levels translate to efforts on the ground. To dig deeper into what is counted as “limited” vs “basic” sanitation services, we look at shared sanitation at the country, district, and household levels in Ethiopia, where IRC is working with local governments to improve the sustainability of sanitation services.

Shared sanitation at the national level

The Ethiopian government has developed strategies to provide basic sanitation services amidst rapid urbanisation, including an Integrated Urban Sanitation and Hygiene Strategy, a National Hygiene and Sanitation Strategy, and a Conservation Strategy of Ethiopia. In urban areas of Ethiopia, the JMP indicates that about 30% of the population share improved sanitation facilities (counted as “limited” sanitation), and 18% use private improved sanitation facilities (counted as “basic” sanitation). These strategies advise how to best provide access to the remaining half, including using communal latrines in highly populated and densely housed areas where private latrines are not feasible.

As in the case of Kebele #03, communal latrines can provide an effective solution in urban areas, shown through a mapping study: most communal latrines are functional (84%), six out of ten users are satisfied (59%), and only one of four users have a family member that won’t use the latrine due to inadequate safety, privacy, or quality (26%). Recognising this success, the government strategies support safe, well-managed, high-quality communal latrines. Nonetheless, these efforts will not meet the SDG benchmark for basic sanitation – the government of Ethiopia will not be able to report progress for those that rely on shared sanitation. As most communal latrines in Ethiopia serve slum areas (73%), the slum dwellers will remain uncounted for the SDGs.

Shared sanitation at the local level

In the Oromia region of Ethiopia, the capital of the South West Shewa Zone, Woliso, is experiencing high population growth due to urbanisation. The Central Statistical Agency reported a population of 61,140 (2007 Census); however, the Woliso Water Supply and Sewerage Enterprise (WWSSE) estimates that this is now closer to 100,000. The WWSSE is the town’s public utility and has worked hard to provide basic services to the town, having been awarded the top performing rank for the region for the last five years. There are 42 communal latrines and two public latrines that were built by NGOs and managed by the utility and households. Yet, Nebsu Teshome, the head of the Sanitation and Beautification Department for the municipality notes that their operations are heavily affected by urbanisation. One of their most pressing challenges is providing services to densely populated, informal settlements where individual houses cannot be reached by the Enterprise’s singular vacuum truck. With 20% of Woliso’s population residing in these slum areas, communal latrines may be the only way to provide improved sanitation services. But, because the facilities would not be counted toward the SDG benchmark, Nebsu Teshome and the WWSSE may not receive government financing for new construction or maintenance of the needed communal latrines.

The communal latrine managed by Yirgalem is used by 30 families. After Save the Children constructed the latrine more than a decade ago, they handed management responsibilities over to the town utility, who then formed an organisation of 120 women tasked with jointly managing the facilities. Management has been a challenge, as the NGO did not ensure that latrine pit emptying services would be available before handing over the management, and many communal latrines can’t be reached by the WWSSE’s vacuum truck. Many of those women lost interest within a short period of time, but Yirgalem committed herself to fulfilling this unique role in her community. She is proud to be the manager of this latrine block, and the thirty families that use the communal latrine are very satisfied with their service. She holds the responsibility of collecting funds from the thirty families to pay for a private vacuum truck to empty the tank. Building on the financial management skills she has learned, Yirgalem is crafting plans to start a store joined with the public latrine and shower facility to help cover maintenance and cleaning costs. She recognizes that managing the public latrine requires more time, money, and planning, and it is easier to manage her neighbourhood’s communal latrine.

The communal latrine managed by Yirgalem in Woliso demonstrates safe management. While it is an effective solution for this kebele, the thirty families that it serves will not be counted as having basic services under the SDGs. Unfortunately, as the SDG indicator does not have provisions for sustainability, governments and organisations lack a political driver to ensure pit emptying services are accessible. Championing local actors like Yirgalem is just one key component in a complex and ever-changing web of factors that make their sanitation system sustainable.

Governments and development actors at all levels are making decisions daily about how to provide accessible and equitable sanitation to all by 2030. Considering the 20% of Woliso’s population living in densely-populated informal settlements or the 30% of Ethiopia’s urban population that rely on shared sanitation, it is not effective to count and report the number of users of a latrine to reflect the safety or sustainability of the service provided. As governments and development actors around the world make decisions about reaching vulnerable populations, they should not be limited by how the SDG benchmark is defined.

I have been working with IRC on USAID’s Sustainable WASH Systems (SWS) initiative, which brings together systems-thinking organisations across contexts at the rural to national level of Ethiopia, Uganda, Kenya, and Cambodia. This effort aims to generate evidence to guide systems-based approaches in WASH, including using stakeholder-based monitoring techniques that account for the perspectives of stakeholders at the household, local, and national levels.

As a part of SWS, IRC is partnering with Nebsu, Yirgalem, and other stakeholders that play a role in sustainable sanitation service delivery. By better understanding the financial, political, institutional, and technical drivers that influence service delivery, this systems-based approach aims to build the capacity of stakeholders to more effectively engage with and strengthen the sustainability of their local system.

Kim Pugel is a PhD student at the University of Colorado Boulder and works on the USAID Sustainable WASH Systems Initiative. As a part of the Global Projects and Organizations Research Group, her research interests convene on the science-policy interface and the role of engineering and innovation in progressing toward social justice goals.

Toilets For All Seasons - Innovating for Sustainable Sanitation in Uganda.