A stone in the water or a change of the tide?

People in Ghana like metaphors. Metaphors make their hearts beat; metaphors also soften what may be too harsh to say directly. Maybe both meanings of metaphors are true for the great efforts of the Community Water and Sanitation Agency (CWSA) to create a monitoring system for water supply in rural areas and small towns. Is the rural monitoring system "a stone in the water or a change of the tide"?

Really, what the CWSA did in the framework of the SMARTerWASH project makes the heart beat: creating a data base for 6 out of the 10 Ghanaian regions, 119 out of the 216 districts in Ghana, 20,000 water systems mapped on a great number of indicators in line with national norms and standards. On Wednesday October 7, the CWSA presented the findings and it appealed to the Ministries and the Development Partners (DPs) to support its monitoring system and support the CWSA in adding the remaining 4 regions and 85 districts to the data base and ensuring continuous monitoring. This could be a “change of the tide”! 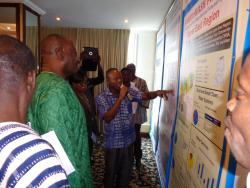 The metaphor also softens what is too harsh to say directly: even with the four remaining regions added, what will happen after the project ends? If there is no project money, who will pay for continuous monitoring? How will District Assemblies (DAs) be stimulated and regulated to update their data? Is this just a snapshot and will we sit on an outdated data base in three or five years’ time?

This could be another “stone in the water”. Project closed – SMARTerWASH in September 2016 – job done, we move on to the next project! Or could this be a “change of the tide”, another way of doing water service delivery. A way which will be showing 119 DAs taking ownership of their data, acting on it, going out to re-train malfunctioning water boards, repairing broken down hand pumps, using the data in their annual plans and reporting to the national government. A way showing Government of Ghana (GoG) taking ownership of the data, accepting accountability for sector performance, incentivising DAs to update the data, using the data for targeting national finance, organising annual Joint government and DP Sector Reviews and reporting data in accessible reports and atlases. A way showing Development Partners aligning with the national monitoring system and actively supporting it. Is this really a system’s change, a change of behavior?

Another sign of change is that some NGOs are willing to use the CWSA data to track the performance of their projects and support DAs to maintain their data bases, instead of creating their own parallel monitoring systems.

Maybe there are reasons to think that indeed this will be a “change of the tide”. The SDGs are ambitious, they cannot be achieved with the usual aid and infrastructure driven approaches but demand strengthening governance and planning systems and a change of behavior. They demand good quality management information systems such as the one created by the CWSA in Ghana. Another reason to think that this may be the “change of the tide” is the economic growth in many African countries. This could be used for an increase in national budgets for public service delivery a/o for WASH. It could lead to stronger citizen’s demand for reliable services. It already does lead to bigger confidence of governments and greater ownership; that certainly is the case for the CWSA. Another sign of change is that some NGOs are willing to use the CWSA data to track the performance of their projects and support DAs to maintain their data bases, instead of creating their own parallel monitoring systems. 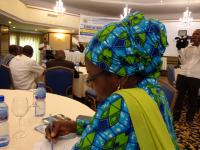 Is it a “stone in the water or a change of the tide”? Saying it is a “stone in the water” is secure and comfortable: project over, job done, no one was asking anything beyond that. Saying it is a “change of the tide” is scary and insecure, asks for trust, taking risks and long term engagement. Maybe it is a matter of choice, going for comfortable or taking a risk.

On 7 October, the CWSA presented the data for water supply in rural areas and small towns to the sector in Ghana. The data show that around a quarter of the water systems are non-functional and only around 10% are providing the service level people in Ghana are entitled to. You do not need a lot of metaphors to show that is not good enough and something needs to change.