The state of the nations

It is the end/start of the year (depending on the moment at which you read this), so time to look at where one stands. The Joint Monitoring Programme of the United Nations has also done that for the state of the nations of the World with respect to drinking water supplies with this* publication that came out just before Christmas. Most JMP reports provide statistics on access to water supply and sanitation services, but this one zooms in specifically on drinking water. So, what does this new report teach us?

First of all, the report presents us with the usual number crunching of access figures, most of which reconfirms some open doors, such as the regional differences in access and the difference in access between rural and urban areas. There are interesting graphs showing that access to drinking water is lowest in the poorest quintile of the population and highest among the best off. Not a big surprise, but still interesting graphs, reflecting the difficulty to target the poorest parts of the population. 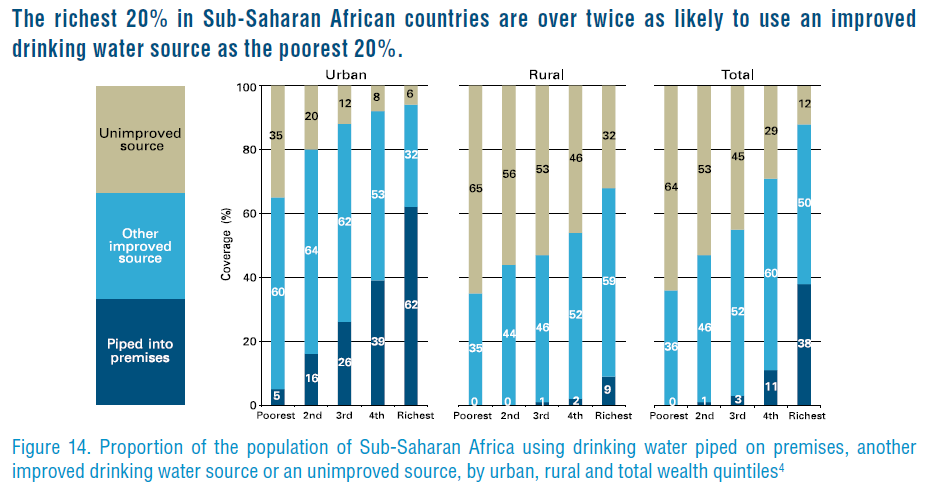 Where it becomes more interesting is when it starts comparing different service levels and technologies. For example, to me it was new to see that there is a higher risk of microbiological contamination in boreholes. The rapid increase in the use of boreholes as default technology in rural areas is thus seen as still containing a high risk from a water quality perspective. This could even be compounded by the fact that water usually needs to be carried from the borehole to the point of use, during which contamination risks increase even more. The report goes on adjusting coverage figures if unsafe but improved water sources are taken into account, leading to reductions in coverage of 7 to 16 percentage points in rural areas. The fact that the JMP starts including these figures in their reports, show the importance to look at the different parameters of the service level, rather than just the minimum requirements. 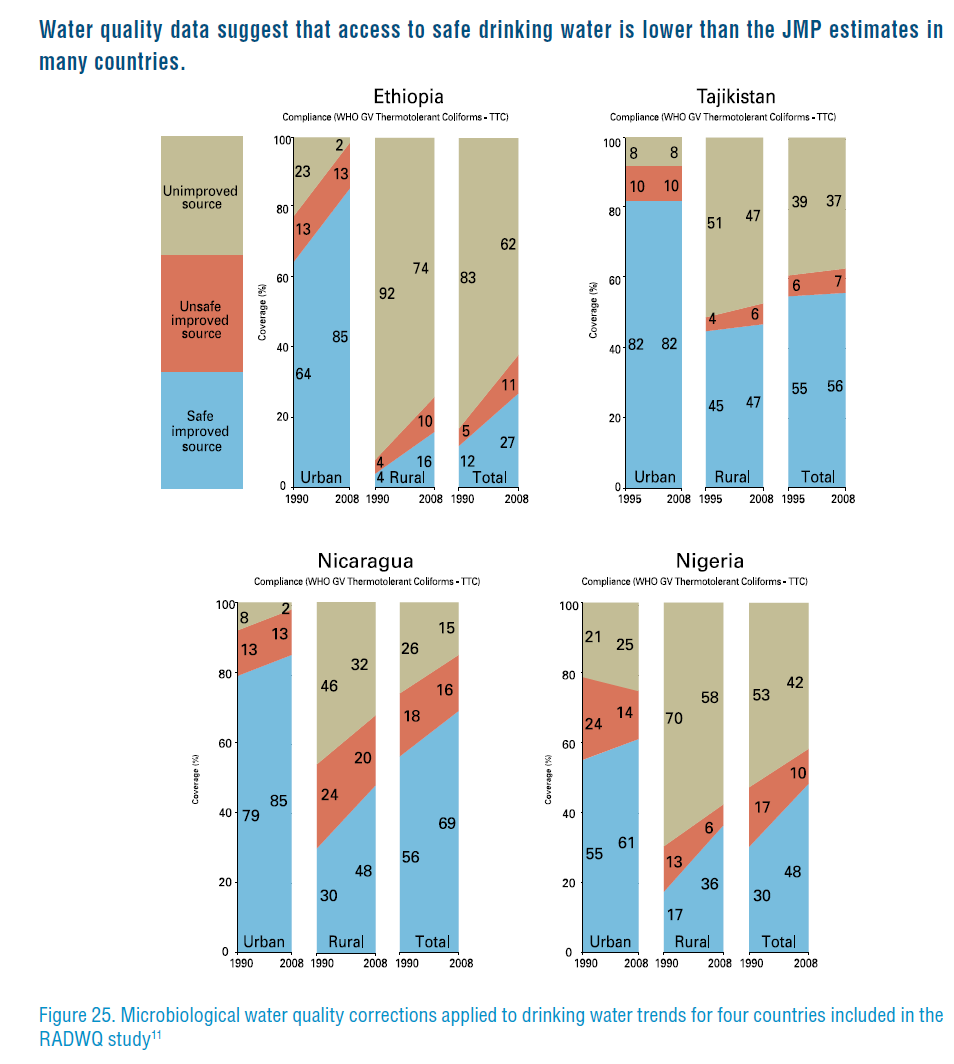 The report also takes a useful look into household water treatment technologies, coming to the conclusions that those who would need such technologies most, actually use them less. HWT is most popular amongst those already having access to piped supplies and amongst the wealthiest income groups, and least in use among the poorest who have unimproved sources of supplies. Unfortunately, the report remains silent on why HWT is used least by those most in need. Probably, wealth is the main reason. If you have little money, it is not likely you will spend it on HWT, but rather first in getting some form of public supplies, even if it paying the fee to access a public borehole or so. In fact the report goes as far as saying that HWT is only a stopgap measure, that doesn’t take away the obligation of service providers, to provide people with an adequate public service.

Where I found the report less interesting is in its analysis of sustainability. Don’t get me wrong; I think it is a great improvement that the JMP report now includes a section on sustainability, something largely lacking in previous reports. But there is substantial scope to improve this section. The main data presented are on non-functionality of handpumps in Africa, but there are no data on other types of technologies or from other continents. I know that such figures are difficult, if not impossible, to get. But, if such nice data can be obtained on water quality, surely at least some case examples studies could have been done to assess sustainability of rural water supplies, if only in a few countries. The analysis that follows on the reasons for low level of sustainability also remains quite limited and definitely doesn’t refer to the most recent literature on this topic, for example from the RWSN. The report itself also recognises this limitation expressing that no good proxy indicator exists to measure sustainability of supplies.

In fact it calls for the post-2015 JMP monitoring agenda to include sustainability more explicitly in the indicators to measure, alongside the measures of accessibility (physical), availability (quantity, reliability, continuity), quality, acceptability (culturally), affordability, reliability, non-discrimination/equity, participation and accountability. Nothing I would disagree with, as surely all these aspects of drinking water supply are important to assess in monitoring the state of the nations. However, with every factor that is added, also complexities increase, for example of defining indicators that are universally relevant. And surely, also the costs of monitoring will increase. The JMP will have a challenging task ahead of developing a relevant and insightful set of indicators that is still manageable and relatively easy to measure. I sincerely hope they have found that balance when 2015 ends and we venture into the new year.

* Why do all JMP reports have to be so big in size? Surely, someone at JMP must realize that a 12 MB report is not so easily downloadable if one doesn’t have access to high-speed internet

20 December 2011 – UNICEF and the World Health Organization release a report showing that the Millennium Development Goal of improving access to safe drinking water will likely be achieved considerably ahead of the 2015 target date.