Solid waste: the next “Cinderella” of the WASH sector?

Too little attention is paid to the impact of solid waste on water and sanitation.

While we all know about the negative impact of polluted water and bad sanitation on people’s health and the environment.

Seven hours to empty a pit

Almost two years ago, I packed my bag and left for Uganda and Rwanda to do my master thesis research about urban sanitation. I was quite new in the field and I had no idea about the ins and outs of the sanitation sector, which I learned belonged to the WASH sector, including (drinking) water, sanitation, and hygiene. While doing research I went on field trips. During one of these trips I followed a small business which was tasked with the emptying of onsite pit latrines in an informal settlement in Kigali.

I will try to sketch the image of what went down: five employees, wearing overalls, gloves and mouth caps, vaccinated against diseases like Hepatitis B. The tasks were divided: two men were emptying the pit, one man was getting jerrycans of water to clean the place and the barrels in which the faecal sludge was stored, and two men were walking up and down bringing the equipment and taking full barrels to the truck. The two men emptying the pit had to take out the solid waste first with a hooking instrument before they were able to connect a small pump (see pictures). They had to do this because of the clogging effect of solid waste on the pump. Although the men were protected, manually emptying a part of the pit brought them in close contact with human faeces, putting their health at risk. The pit was 10m3 and it took them around seven hours to empty it. The need to manually remove the solid waste out of the pit before the actual mechanical emptying of the faecal sludge could take place was the main reason for this time inefficiency. 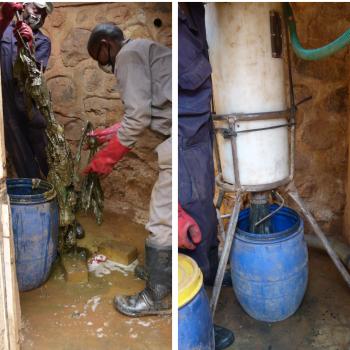 The impact of solid waste on the WASH sector

Back in the Netherlands, I read up on the subject to learn more about the impact of solid waste on the WASH situation. Blocking of drains contributes to flooding and “causes septic tanks or pit latrines to overflow” (WSUP, 2018) leading to unhealthy situations in which the environment gets polluted and people get sick. Malaria mosquitoes lay their eggs for example in plastic bags resulting in the spreading of diseases. Moreover, when it rains, the water drips through the solid waste leaking chemicals into surface- and groundwater, making the water “unfit for consumption” (Chavan, Zambare, & Pawar, 2014, p. 59).

To make it worse, the amount of solid waste is growing at a rapid pace as a consequence of socio-economic developments and urbanisation, especially in developing countries. Solid waste – including residential, commercial, and institutional waste – is therefore expected to double – from 1.3 to 2.5 billion tonnes annually – in low- and middle-income countries and will globally increase from 2.01 to 3.40 billion tonnes by 2050. This will especially affect urban areas where population growth and density, and increasing consumption will lead to an acceleration of solid waste and its impact.

… and then there are the plastics

Plastic is one of the most problematic solid wastes; its slow decomposing process and degradation into ‘microplastics’ pollutes and disrupts the waters and ecosystems. An island consisting of plastics three times the size of France – and this is just the biggest of five such islands – is floating in the Pacific Ocean destroying the habitat for fish and other flora and fauna in the sea.

Some countries or cities – like Chile, Kenya, Mumbai, and Rwanda – have banned the use of plastic bags. Projects and companies are working on this issue; for example, the Ocean Cleanup project of Boyan Slat deals with the plastic island; or the WeCyclers initiative that collect and recycle waste from the slums in Lagos, Nigeria.

Now, more than one and a half years later, I am working as an intern at IRC WASH. I have noticed that within the WASH sector it seems that the importance of solid waste has not yet been recognised; most organisations – like IRC – touch upon solid waste, but a focus is missing. Because of the impact of solid waste on the overall WASH situation, it is necessary to take a more holistic approach, and integrate all influencing factors in order to improve the situation (e.g. solid waste management, surface water drainage). Recognition that “challenges – and their solutions – are interrelated” (UN, 2018, p. 14) is required in order to strengthen the system as a whole and deliver sustainable WASH services efficiently and effectively.