A significant milestone on a long, shared journey

The added value of the SWA Jakarta Sector Ministers' Meeting. 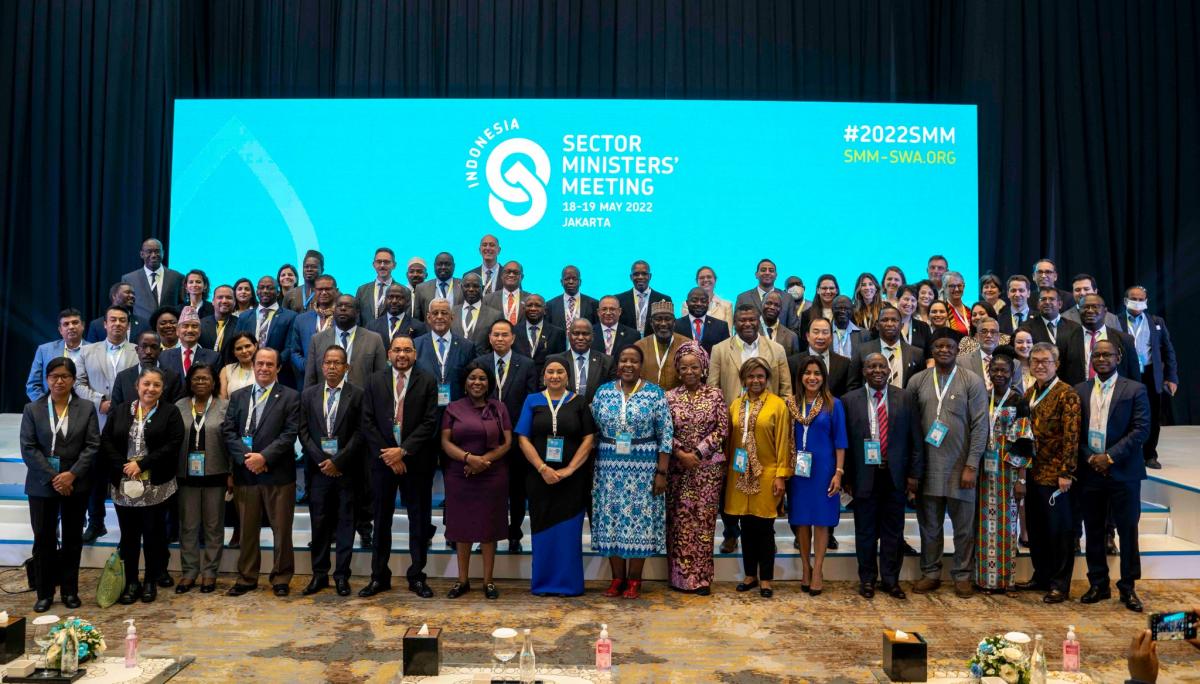 Photo credit: Sanitation and Water for All (SWA)

We left Jakarta and the Sanitation and Water for All's 2022 Sector Ministers' Meeting (SMM) a bit over three weeks ago. Time to recover from the jetlag and put a bit of distance between ourselves and two hectic days of plenaries and dialogues and corridor talks.

The questions we're most often asked are "what has come out of it?" next to, perhaps, "but is it worth all the cost and carbon of bringing ministers and SWA partners together?".

Answering the first is easiest. There's an outcome document with three main messages relating to political prioritisation, the need for participatory and inclusive processes and the importance of getting the "enabling environment" right which is essential if we are to attract more money into WASH. Dutch Water Ambassador, Henk Ovink, committed to making sure these recommendations would be brought to the UN Water Conference in New York next year.

There were also, of course, commitments made by Ministers present at the conference, not to mention advanced progress on a presidential compact, announced by Zimbabwe. Two new countries applied to join the partnership during the meeting. The fact that the conference was officially opened by the Vice President of Indonesia is itself a clear statement that the involvement of the highest political office in the country is a requirement for propelling WASH, Health, Climate Change and Environment issues into the spaces where key policy, laws and finance decisions are made. And that is where the sector should be anchored. All of this is good news, and the sort of thing that it is good to celebrate.

Answering the second is more difficult, but perhaps more revealing of the real value of the Sector Ministers' Meeting. Because, let's face it, this is an expensive business. In the end, some 50 of more than 80 ministers who expressed their intention to come made it to Jakarta, and getting them, and their technical teams there was not cheap. The conference cost well over a million Euros. Not to mention all the carbon released by flights for more than 350 people from 57 countries around the world.

What's more, this is just the tip of the iceberg, not touching on the huge commitment of time and energy by the SWA secretariat and partners. The SMM was preceded by six months of preparation involving a huge input of unpaid and unaccounted for time and effort by SWA partners in country. Partners helped prepare the ministerial delegations, they attended preparatory webinars and multi-partner meetings and workshops during which they discussed the achievements of current commitments and came to agreement on new ones.

This gets to the heart of the true value of the Sector Ministers' Meeting, not as an event in and of itself, but as a milestone in a long, shared journey. Sanitation and Water for All is, above all, about creating a movement. One that is based on a shared vision of what it is that we, as a network of committed humans, want to achieve: access to water, sanitation and hygiene for everyone, everywhere, forever. In IRC's language, it is about coming together to create and strengthen the national and local systems that can deliver this vision.

The Ministers' Meeting is, therefore, about building a sense of community and shared endeavour amongst ministers. It takes them out of the daily hurly burly of their busy lives for a few days, to share experiences with their counterparts from around the world to gain new insights and above all energy, before returning home and plunging back into things.

Judging from what we heard in Jakarta, and from the formal feedback forms, this was achieved. Everyone we talked to and who was part of the national ministerial delegations appreciated the time they got with their ministers before and especially during the meeting. We saw and experienced ministers challenged and enthused by each other. Engaging in open and honest discussion of successes, but also worries.

The ministerial dialogues, that take place between the main plenary sessions, are bound by the Chatham House rule, so cannot be reported in their specifics. But the best are remarkably candid exchanges of learning, of optimism and things that ministers are proud of, but also of frustration and setbacks. Most common among the latter, is the constant challenge to have the real economic value of water, sanitation and hygiene understood and invested in and the related struggles to engage with the Finance Ministers on WASH, Health, Environment and Climate Change.

Breaking out of the echo chamber

This SMM was different to previous ones in that we explicitly encouraged ministers responsible for WASH to reach out to and involve their colleagues, especially those involved in Health, Environment (and Climate) and Economic Development. This is part of a broader strategy of seeking to break WASH out of our echo chamber – our tendency to speak primarily to ourselves and lament our lot! SWA has always sought to engage with Ministers of Finance, but we think that this broadening to other ministries and sectors is also crucially important. It was therefore a success in and of itself that almost half of the ministers present were from 'beyond WASH'. But we cannot ignore the fact that such a success also requires thinking through and planning for long-term strategies for inter-sectoral engagements back home (and facing up to the bureaucracy and red tape this will involve!).

Returning to the original question then. Yes, we believe that the meeting was worthwhile. Progress comes from human beings who are uniting and committing to achieving common goals and principles. Doing so requires human connections that, despite our amazing virtual technology, can only be cemented when people gather, spend time together, get to know each other, exchange business cards and instruct their technical teams to follow-up.

This said, the true worth of the meeting will only be seen in retrospect, because what comes next is as important as what came before and, indeed, what happened in Jakarta. The proof of the partnership and network and movement that is SWA will only be apparent when the countries who are its partners succeed in getting back on track, in delivering safe and safely managed and climate resilient services to everyone – no one left behind. The proof will be when we see more presidential compacts. When we see genuine commitment to sector reform. When we see more finance being made available to the sector.

Which is where our role as non-government partner comes in. We persuaded and supported our ministers to come to Jakarta, we helped them to prepare, we joined them as they made new connections, shared their tragedies and triumphs, and made their commitments. Now we must also continue to support them and encourage them and hold them and ourselves and each other to account for delivering what was committed to in Jakarta. When that happens, we can say that the meeting, and the process of which it was part, has been worth it.

We, as IRC, and as SWA partners commit to doing so. We hope you will too!

About SWA: Sanitation and Water for All is the United Nations-hosted partnership working towards a joint objective of water, sanitation, and hygiene for all, always, and everywhere. Its membership includes governments and their partners from civil society, the private sector, UN agencies, research and learning institutions and the philanthropic community. Read more.

Statement of the ministers and partners of the Sanitation and Water for All (SWA) partnership, who at the 2022 Sector Ministers' Meeting (SMM) on 18- 19 May 2022 in Jakarta, Indonesia.

Includes recordings of the 2 day meeting in English, French, Spanish & Portuguese and of the preparatory process webinars, background documentation and key resources.