Sensible universal access: what it means to achieve the WASH SDGs

Good. Here's hoping this is the beginning of the end of this short-sighted, dishonest, self-harming stupidity. "T… https://t.co/PJmhAitHjx

Countries must now set their own realistic national targets and start monitoring them. 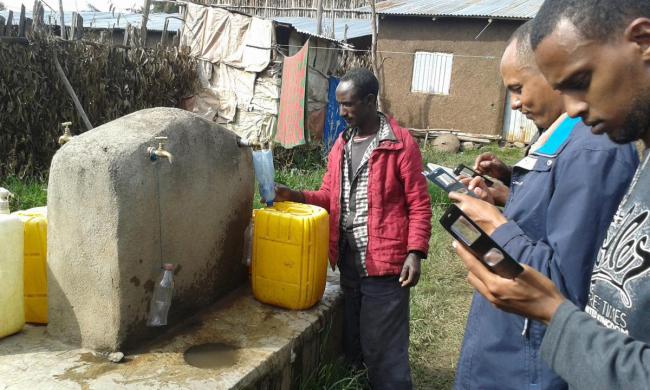 Countries around the world have agreed a series of ambitious global targets for water as part of the Sustainable Development Goal (SDG) agenda for 2030. Those for water, sanitation and hygiene (WASH) centre on provision of universal access to safe drinking-water, sanitation and hygiene. If accomplished, this will yield immense health, economic, environmental and social benefits.

Countries, however, have vastly different starting points in terms of existing WASH service levels as well as enabling environments including resources, both human and financial, to accelerate progress. While most high and many middle-income countries have largely accomplished universal basic coverage and have set their sights on improving quality of services, many low and a number middle-income countries still struggle with eliminating open defecation, extending basic coverage to large populations, and managing faecal wastes in dense urban settings.

Current WASH coverage and trends (from the WHO/UNICEF JMP) suggest that in these countries, meeting even basic access will be deeply challenging and require profound change, not least through increased political prioritisation and investment. At the same time, there is a risk that practitioners and policy makers may simply be overwhelmed by the magnitude of the challenge, particularly so if they interpret the 2030 Agenda as requiring each country to achieve universal safely managed drinking-water and sanitation services.

This would be a mistake as it misses an essential change from the Millennium Development Goals (MDGs), namely, that under the SDGs, Member States are charged with setting their own national targets and monitoring progress towards them. The “Transforming our World” document that established the 2030 Agenda (and was agreed by all Member States) clearly advises that each country should set its own targets guided by the aspirational global level of ambition laid out in the 2030 Agenda. Universal access to safely managed services should, indeed, be an ambition for all countries: but universal access to basic services, or universal elimination of open defecation, while making progress towards safely managed services, can also be appropriate and relevant national SDG targets.

If the SDG agenda for water is going to be translated into meaningful progress, countries need to take action now to set their own ambitious but achievable targets, taking into account their particular circumstances. This includes undertaking a serious appraisal of the current services used by people in the country, as well as the capacity to extend and improve these services. This appraisal should inform a critical review and possible revision of existing targets and policies. Yet, in 2018, 3 years into the SDG era, it is unclear to what extent countries have gone through this exercise of setting SDG-inspired targets, informed by evidence and local realities.

This could be potentially because of a lack of awareness of this necessity or because this is a complicated task that could be hindered by politics and complex technical considerations. Some countries have broad targets for universal access that lack definition, for example calling for drinking-water safety but not setting drinking-water quality standards and benchmarks. Others have well-defined targets but lack the capability to measure progress because of constraints in national monitoring systems. Both situations risk leading to a situation in which it is impossible to hold service providers and authorities to account. Put quite simply, the failure to set and monitor progress towards properly developed and owned national targets denies the opportunity provided by the SDGs.

IRC and WHO have worked together since IRC was founded in 1968 as the “WHO International Reference Centre for Community Water”. In the last few years our cooperation has intensified, in particular in the area of monitoring, and we have just signed a new five year cooperation agreement that puts strengthening national monitoring systems at its heart, as part of a broader shared agenda to strengthen all aspects of national WASH systems. We remain convinced that at both global and national level the setting of meaningful targets and the continuous monitoring and reporting against them is critical, and will continue to support both processes.