Sanitation – a right but also our civic duty

What would happen if we outlawed and started to punish open air defecation in Burkina Faso?

Many people have a bit of a laugh at "World Toilet Day". Celebrated every 19 November, you could wonder where on earth the idea came from to celebrate toilets. Of course, when you have clean toilets to hand whenever you need them at home or at work, you may well wonder why we need an international focus on toilets.

But when you hear the great (both figuratively and literally speaking) Sana Bob in his famous hit "Mon Pays" (My Country) worry about what happens to someone who may be overcome by a sudden, pressing and violent urge in the middle of Ouagadougou, far from home or work (and I am sure you have all experienced this at some point), you begin to realise why it isn't so silly to talk about toilets, even for those who are well-off.

When we know the notorious state and chronic lack of toilets in our official buildings and when we do not have the privilege of being a high-level manager whose office has its own toilet, we feel even more concerned.

Finally, when we learn that every day, around 10 million people in Burkina Faso defecate outside, in other words, every day 1,400 tonnes of human waste are deposited in the environment and can easily make its way onto our plates, we look at flies completely differently...

Yes, toilets are private, but this is a serious problem. It is about our health, our dignity so we have to talk about it publicly. So in the end, everyone will agree that 19 November does not seem so silly when you think of how important the issue is and indeed, we should not wait for that date to talk about it because it is an issue that affects us every day of the year.

Sanitation is a human right

Sanitation is a human right; it is included in the Constitution of Burkina Faso. While for the specialists in this field this fact is highly significant, public opinion clearly has its doubts about what it means. Of course the right to sanitation does not mean that the people can sit back and wait for the Government to build them toilets. If my neighbour regularly goes to poo (let's be totally clear about what we are talking about) on the empty lot across the road from my house, he is infringing on my right and what I expect from the Government is that it punishes him to defend my right. For this specific case, the 2002 hygiene law stipulates that every house owner must install toilets and ensure they are operational and kept clean. Sanctions to punish anyone who fails to comply with this law are also outlined.

But as with many of our precious laws, and we are attached to our rule of law, the level of application remains disappointing. Little effort has been made since this law was passed to check if it is being applied and to punish those who break it. Yes, many people can plead poverty and a lack of money as an excuse for not installing a latrine. But what do we really mean by poverty? Besides Ouagadougou and some other towns, nobody sleeps outside. Everyone lives under a roof, no matter how informal it is. Mobile phones have found a place in most household budgets despite the fact that they are less essential. And finally, would we let people off for breaking the road rules on the pretext that they are too poor to learn the rules? Of the 10 million people who use the open air daily as their toilet, a good number have a motorbike or bicycle. And the most vulnerable usually have family who look out for them, helping with education, health and other essential costs. We do not need to pull out the statistics to recognise that the extreme poverty which would justify people waiting for help from national or international subsidies to install household toilets is marginal. We can also recognise that while the case of people living with disabilities who need specific solutions is an extremely important consideration in terms of human rights, it remains marginal in terms of the number of such exceptional cases. And yes, when we look at Sana Bob's appeal regarding public toilets, of course this directly calls on the public authorities as duty bearers. And finally, sanitation is not just about toilets but about the whole chain, right up until waste no longer poses a threat to the environment or to public health. And when it comes to our waste after it leaves our toilets, the Government holds considerable responsibility.

But for the moment, let's stick to toilets. A simple way we should all understand the right to sanitation is that we all have a duty to comply with the hygiene law. This civic duty is confirmed at the highest level thanks to the inclusion of the right to sanitation in the constitution, which also underlines the Government's duty to strictly implement not only the measures to encourage compliance, but those outlined to enforce the law and sanction infringement. The fact that since 2002 public efforts have been principally focused on public awareness raising and mobilisation and have given pretty poor results reminds us of the important role of control and sanction in promoting the right to sanitation: two thirds of the population still defecates outside! 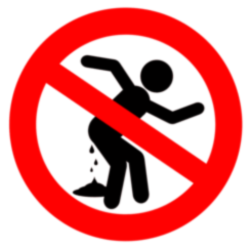 Speaking of law, as a mere citizen and not a legal specialist, on reading the hygiene law carefully I have some questions: is open air defecation really forbidden in Burkina Faso? Because maybe, if it is not, what can I use to support the argument that the disgusting habits of my neighbour are violating my right to sanitation? The law stipulates that there must be toilets in homes and public places. The law "forbids the depositing, throwing or burying of any form of waste on public roads or places, river banks, water holes, rivers, lakes, ponds, storm water drains, irrigation channels or near a water source". But are the private, empty and thus uninhabited, plots in my neighbourhood public places (whether or not they are fenced)? How does the law apply in the informal neighbourhoods, in rural districts, in villages? These are the areas where most of the people who defy the law to defecate in the open air live. Yes, a general provision of the law stipulates that it is "forbidden to perform acts that may harm public health". The everyday person who wants to see their rights respected then has to put some form of sign on their wall "no urinating or defecating here..." confirming thus their doubts as to the precise scope of the law.

The law leaves it up to the district authorities to design and apply relevant regulations to reinforce the impact of the hygiene law's provisions. But in which of our urban or rural districts is open air defecation specifically outlawed? The district authorities have a large share of responsibility in combatting open air defecation. For a start this would oblige them to think about it and react much more quickly to the huge demand for public toilets in our towns. Once it was clear in each district that this practice, unworthy of upright citizens, is forbidden under the constitution and the hygiene law, the husbands in our villages and informal areas would know that they have the constitutional duty to provide toilets for their family to preserve the health and dignity of their wives and children. Women would not only demand a roof over their heads to marry, but also a toilet for their dignity. People from villages now living in town would know that they have a constitutional duty to help and influence their relatives back in the village to overcome any obstacles and stop using the bush as their toilet. And if, despite all this, rude neighbours continue to use vacant lots as their toilet, they would know that at any moment they may be caught by the police, the gendarmes, the Koglweogos or any other legal and legitimate guardians of our constitution and our laws.