The real danger zone: can fragile states reach the water and sanitation SDGs?

The Sustainable Development Goals (SDGs) have the target of reaching universal access to water and sanitation by 2030. But can this target realistically be achieved in the most difficult of settings: fragile states?

Two years ago, we set out to test a hypothesis that many countries get stuck in what we called "the danger zone". This is the coverage level at which the rate of construction of new water and sanitation systems is about as high as the rate at which existing systems become non-functional, due to poor investment in capital maintenance. And as a result, the rate of net coverage growth becomes stagnant. Our original thinking was that this danger zone typically occurs at a coverage level of around 75%. This is the coverage level found in many low and lower middle income countries, that have done large investments of the past decade and now need to make a shift to investments in maintenance. The Joint Monitoring Programme (JMP) data, however, showed that the danger zone phenomenon only occurs to some extent in this group of countries. The group of countries that is in the real danger zone of stagnating coverage growth appeared to be fragile states with very low levels of coverage.

In preparation for a session at last week’s Stockholm World Water Week on “operationalizing the SDGs in fragile states”, I went back to these figures (updated with this year's JMP data) in order to explore the real danger zone in more detail, specifically focusing on two questions:

Before going into the numbers, a few words on the definition of fragile states. There are several definitions, but in essence these are states that are unable to provide basic services to their citizens, for a number of reasons: the state has no legitimacy or even presence in parts of the country; the country is in war or civil strife; or, the state has very limited financial or other capacity to fulfil its basic functions. For this work, I have used the definitions and data from The Fund for Peace, which has been publishing an annual Fragile State Index since 2005. This ranks the degree of fragility of countries based on criteria such as presence of refugees, group grievances and economic decline.

Fragile states failed to reach the water and sanitation MDGs

In order to answer the first question, I listed the countries that were ranked as the 20 most fragile states in 2005. For each country, I assessed revised the JMP data to check whether it had reached the MDG target differentiating between water and sanitation and between urban and rural areas (see Table 1). This shows that most fragile states made limited or no or only moderate progress. For example, Ivory Coast which was ranked as the most fragile state back in 2005, made moderate progress in water, and limited to no progress in sanitation. But there are also some positive exceptions. Liberia and Sierra Leone are both countries where peace has ensued and are no longer in the top 20 of most fragile states. Those are also two countries that at least in terms of water supply have achieved the MDG target or made good progress towards achievement. 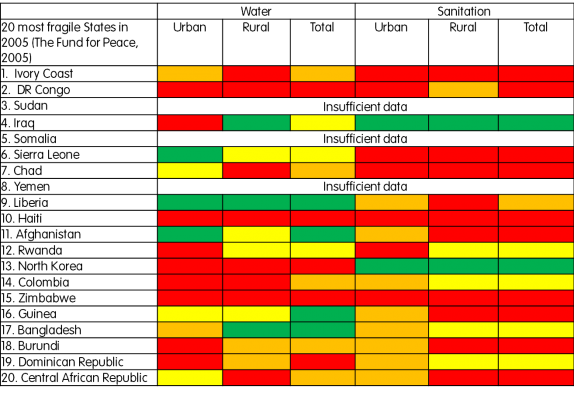 Table 1: Achievement of the MDGs by the top 20 most fragile states in 2005 (Source: based on The Fund For Peace, 2005; and WHO/UNICEF, 2015). Colour coding: green: MDG target has been met; yellow: good progress; orange: moderate progress; red: limited or no progress.

Still, the overall picture is a negative one. The problem becomes even more apparent when comparing these 20 countries with the average of other low- and middle income countries. The data  in table 2 show that these fragile states really scored much lower than the other countries.

Table 2: Comparison between the top 20 most fragile states and other low- and middle income countries in achievement of the MDG targets

These results should not be surprising. The discussions in Stockholm, but also elsewhere in the public debate around WASH, all emphasise that delivering good WASH services requires good governance, local authorities with a reasonable level of capacity, an adequate mix of financing mechanisms and a strong enabling environment. All these elements are by definition lacking in fragile states.

Fragile states will not reach the SDGs by 2030

It is therefore no surprise that our projections show that fragile states will not reach the SDG targets by 2030. These projections are done for those countries that are currently (2015) classified as the most fragile ones, using a linear extrapolation of their coverage growth over the past 25 years (see table 3). The results show for example that at this rate of growth, a country like Somalia (ranked as the second most fragile state) will reach universal coverage only in the year 2661! Of the 20 countries, only two will reach one of the SDG targets by 2030.

Again, this is not surprising, because not only have these countries had historically low rates of coverage growth; many also still have very low coverage levels, so a very big gap to fill in only 15 years. Filling such big gaps is a tough call for any country, but specifically for those that don't have the ‘usual suspects’ of good governance, local government capacity and adequate financing mechanisms in place.

Not an excuse for doing nothing

The fact that most fragile states will not reach the SDGs, should be an excuse for doing nothing. The discussion during the session in Stockholm made it very clear that addressing water and sanitation issues may often be a very useful and practical way of starting to build the capacity of the state. Particularly when countries come out of conflict, there is need to build a legitimate state that is able to fulfil its basic functions and provide services to its citizens. Through the day-to-day work of  providing water and sanitation services, such state capacity can be built. One of the books highlighted at the session, actually brings together case studies on how peace building and working on water go hand in hand together.

Photo 1: IDPs camp in the streets of Dili, Timor-Leste

Fragile states do not only literally present a danger zone. They are the states that, because of open conflict or otherwise, are least able to provide services to citizens. And many of them are also in what we have called the water and santiation danger zone, where rates of coverage growth are stagnan, and where water and sanitation MDGs were not met. Most of them are not likely to reach the SDGs either, even if they would massively increase their level of results. This doesn’t mean there is an excuse to do nothing. Some of the states that were most fragile in 2005, showed that meaningful progress can be made in providing basic services. And in fact, the provision of basic services may help in building that state. But as one of the presenters during the Stockholm session said, such a governance transformation takes more than 20 years. If through the provision of WASH a contribution can be made to promoting peace and stability, then that is arguably even more meaningful than the question of whether universal coverage has been achieved in WASH or not.