Why sanitation matters in the climate discourse.

This blog is co-authored by Ambrose Kibuuka, Peter Feldman and Arjen Naafs.

We recently participated in a planning meeting for various advocacy events in 2020, with  climate change as theme. The effects of climate change on water are fairly widely known with global warming sometimes leading to more water (more torrential rainfall and more floods as well as rising sea levels due to melting of ice caps), or too little water (longer droughts, hotter weather). There was much discussion to what extend climate change was enough of an issue in sanitation to make it also the theme for sanitation.

In this blog we challenged ourselves to understand the four interactions between climate change and the sanitation chain and how these potentially threaten safe sanitation service provision. 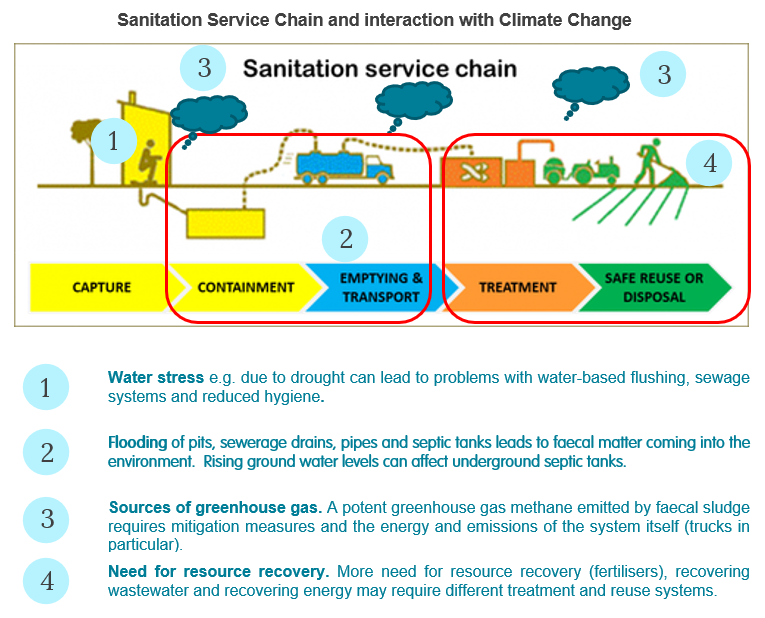 1. Water stress, drought and increased aridity: Although most places will get more rainfall, some areas may receive lower rainfall due to climate change and experience more droughts. Water stress can lead to insufficient water for pour-flush toilets and low flow rates in water-based sewage networks. Though the amounts of water needed for flushing are small (particular in comparison with large water users such as agriculture and power generation) water demand management in drought-affected urban areas has been a force for innovation and change in places like Chennai and Cape Town. A squeeze on water resources also has negative consequences for hygiene practices, including handwashing and anal cleansing.

2. Increased rainfall and flooding. Intense rain can lead to flooding around rivers, flooding of low-lying and poorly drained areas, as well as a rise in groundwater levels. This can lead to flooding of unprotected pit latrines, overflow of and seepage from underground septic tanks. Poor communities and their toilets are unfortunately often found in locations vulnerable to flooding and are therefore affected disproportionately. The common practice around the world of combining stormwater drainage and sewerage can lead to sewage mixing with stormwater and entering nearby surface water. Existing sanitation technologies have different resilience (see table below). In regions with high water tables, or limited drainage channels, sanitation technologies must be water-tight and/or located above ground. Good examples are container-based toilets used in Kenya and raised dry urine-diverting facilities such as Eco-San toilets. Septic systems are considered vulnerable not only because of flooding and discharge of the tank contents into the environment, but also because of the risk of flotation due to rising groundwater levels. This is reported to be a problem in the U.S. state of Florida.

Additionally, due to more intense storms or cyclones, latrine superstructures and conveyance pipes are at greater risk of damage - potentially resulting in a loss of functional service and a reversion to open defecation, leakage from pipes, and/or disruptions in treatment facility operations. Mass evacuations due to intense storms such as Cyclone Bulbul will require emergency sanitation facilities at shelter areas.

Faecal waste collection, management, and treatment can also be affected by flooding, as emptying vehicles may be unable to access certain communities due to impassable roads and sewers may overflow due to solid/plastic waste blockage.

As floods cause widespread damage and loss of infrastructure on a regular basis in both the developed and the developing world (Howard, et al., 2010), flooding is the most important and common linkage between sanitation and changing climates.

3. Sources of greenhouse gas. The decay of human excreta is a potential source of methane, which is a more potent greenhouse gas than carbon dioxide (by a factor of about 30) (Science News, 2014). Solid waste and wastewater combined currently account for 5 percent of global emissions, and with increases in population, emissions are expected to rise. Mitigation measures include use of composting toilets, using methane to generate energy in biogas facilities, regular emptying of septic tanks, and effective wastewater management. Sanitation treatment itself depends on processes of natural, living processes such as decomposition that are affected by temperature changes.

On-site sanitation is prevalent in many developing countries and requires trucks to empty pits and septic tanks. Many are not currently being emptied and we are promoting improved collection and safe disposal, but this likely means putting huge fleets of trucks on the road. Considering the scale and future needs of emptying, mitigation to either reduce the need for emptying and/or empty in a more environmental way will need to be considered.

4. Need for resource recovery. The climate change discourse is highlighting resource scarcity and this emphasises the need for resource recovery (fertilisers), recovering wastewater (particularly in water stressed areas) and recovering energy. These may require different treatment and reuse systems, which will potentially lead to a rise in costs. Initiatives on circular economies and energy recovery are examples of this getting increasing attention. 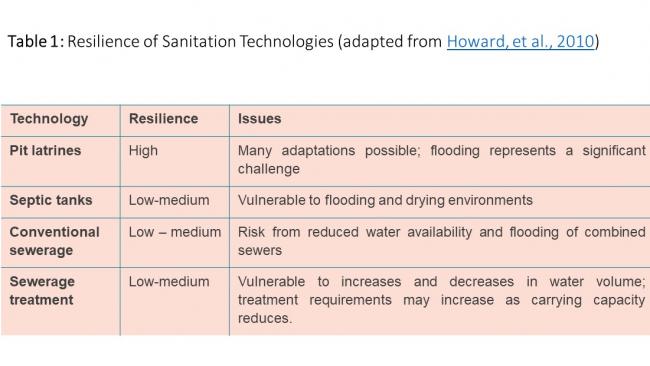 Emergent climate risks present a challenge for governments in drought or flood prone areas: make the systems that deliver water and sanitation services more resilient now, or deal with significant health consequences down the road. Such adaptations are not only about the infrastructure, but also about the management of the entire system, from household to municipal level (Barbara Evans, 2018). This also includes preparing for, and response to, extreme weather events.

In conclusion, sanitation services are essential for human health, but their technologies and their management systems are indeed potentially vulnerable to climate change, yet in contradiction they also play a significant role in pollution and greenhouse gases. This discourse highlights that there are significant interactions and the momentum to address climate change presents an opportunity for WASH practitioners. New funding and activities focused on climate adaptation are driving pressure to try and do things differently and therefore deliver more sustainable, resilient services that could help lead the way to universal access as well as a range of public health benefits that have yet to be fully realised.