Plotting urban shit volumes and practices: put your money where your shit is

Testing a simple tool to assess faecal waste flows in a real life situation can be a lot of fun. The results though can at best be described as enlightening and at worst as shocking.

In December 2015 we wrote a blog with the (at least for us) exciting news that we were in the midst of developing a simple-to-use faecal sludge management assessment tool. The tool is developed to determine faecal waste volumes along the entire sanitation service chain, allowing the user to determine where the biggest losses are and thus where interventions should be targeted. Less easily quantifiable issues such as the existence of policies and legislation, availability and transparency of plans and budgets, presence and adherence to environmental and safety standards and so on are captured with the use of score cards. 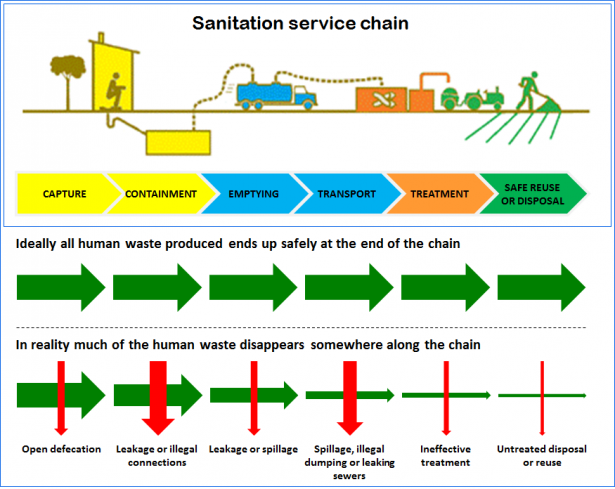 Developing a new tool from scratch on the basis of theories and literature is one thing, making it work in a real-life situation is another thing all together. Towards the end of February and early March 2016 we had the opportunity to apply, and test, the prototype in the city of Mataram on the island of Lombok in Indonesia. The mapping of faecal waste volumes and practices is part of a bigger integrated Rapid Action Learning (RAL) initiative on the island. The RAL, carried out by three Netherlands-based organisations, is part of the Urban Sanitation Development Programme, financed by the Embassy of the Kingdom of the Netherlands and managed by HaskoningDHV.

How rapid is rapid?

Within a seven-day period, we were able to obtain almost all the required data by interviewing a range of local actors and wherever possible this data was validated through site visits and on-the-spot checks. Inputting all the data and information in the rapid assessment tool took some two days and three days were used to make sense of all the data and information and to write up an initial report with the main findings. All in all, within just two weeks we were able to come up with a fairly comprehensive insight of the current situation. Considering that this was the tool's debut and that modifications had to be made along the way, it is expected that future assessments will be even more rapid.

How useful is the tool?

Although we believe that the tool promises to be very useful, it will be up to others to judge it fairly and squarely. Even if governments know there is a problem within the chain, there may be a cause for concern which is overlooked or underestimated and which needs attention. Conversely, issues which were thought to be the crux of the problem may turn out to be unimportant in the grand scheme of problems. In the case of Mataram, individuals we talked to before the assessment had an idea that there were likely to be problems with the management of faecal waste in the city. The findings of the assessment indeed revealed some serious problems and raised a number of concerns. The advantage of the tool is that it is able to confirm these gut feelings by providing the required evidence. The tool is also able to quantify these challenges, helping to identify possible solutions and map out scenarios during the next visit.

Are there any limitations or shortcomings?

For insiders it will not come as a surprise that a lack of sufficient and reliable secondary data sources seriously limits the use of the tool. It was in particular difficult to obtain reliable data on the type and quality of existing sub-structures necessary to calculate the volume of safely contained human waste in onsite sanitation facilities. Furthermore, within the one-week period it was basically impossible to obtain any data on private pit emptying service providers. Nobody seems to know how many there are and what they exactly do, and with their "illegal" or at least unregulated status they are naturally unwilling to cooperate. It proved therefore impossible to determine the scale (and volumes) of these businesses. This is a serious challenge that will need to be addressed during the next visit. 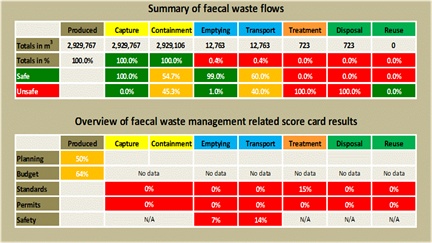 The findings from Mataram will be presented and discussed with the city authorities during the next visit planned for the month of May 2016. Their biggest concern at present is the ever increasing volume of solid waste littering the city. It is expected that the presentation of the results of the rapid assessment will be a wake-up call for the authorities that, even though faecal waste may not be as visible as garbage it is just as ubiquitous and more dangerous for its invisibility, and as such should be taken more seriously than is done now.

In the meanwhile, the tool will be further improved on the basis of our learning. During the next visit in May 2016, the improved tool will be further tested in another urban location on the island of Lombok. There are also advanced ideas to test the tool in one urban location in India and discussions have started with one more reputable WASH organisation to test the tool in another country.