Past performance is no guarantee of future results

Maybe there should have been a disclaimer on the SDGs. 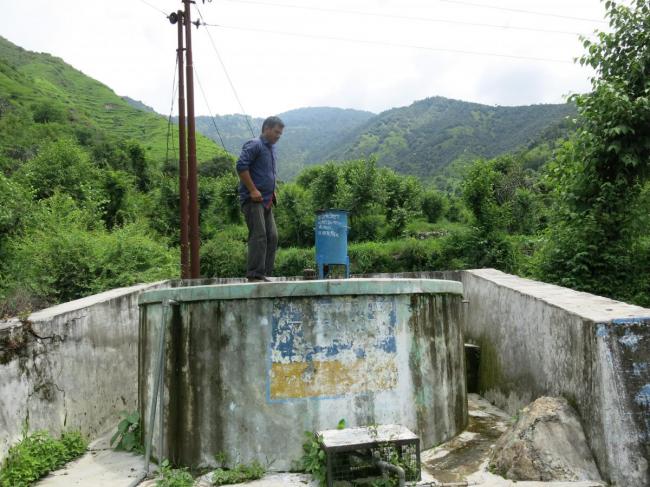 This disclaimer – so common on investment packages – should have been added to the SDG for water and sanitation as well. If we go by past performance, a large number of countries will not achieve universal water and sanitation coverage. Even if future results are much higher than past performance, it is likely that some countries, and some sub-sectors will still be far away from achieving universal coverage.

44 and 160 million people with access by New Year's Eve

Almost one year went by, since the SDGs were agreed upon. By now we should have achieved already almost 1/15th of the targets. This means some 44 million people should have gained access to drinking water by New Year's Eve and global water coverage should have gone up by a bit more than half a percentage-point. A whopping 160 million people need to gain access to sanitation this year in order to be on track for universal coverage by 2030 – increasing global sanitation coverage by 2 percentage-points. Breaking the broad goal of 'universal access' into annual targets allows us to assess how realistic it is to reach those targets.

WASHWatch has done such an assessment, displaying it in their great maps. Using linear projections of coverage growth, they indicate the water and sanitation coverage countries would achieve by 2030, as well as the total number of additional people to be covered to reach universal coverage. I have used a similar method, using the average coverage growth over the past 25 years (using JMP data), and linearly extrapolating that for the next 15 years. I have broken that down between urban and rural data, in order to see in which sub-sectors likelihood of success is highest, and where challenges are biggest. A particularly powerful way of looking at those extrapolations is identifying the year in which a country would reach universal coverage. So using the past performance to see when the future result of universal coverage would be reached. By this method, Colombia would reach universal coverage with rural water supply only by the year 2145! Its past rate of coverage growth was only a meagre 0.2 percentage-points per year over the last 25 years.

The 10% star performers and the coverage growth frontier

It is not surprising that this is low for urban water, as many countries had already achieved close to universal coverage, and it is expected that coverage growth slows then as a country gets close to that universality. Moreover, population growth has been higher in urban areas than in rural areas, so coverage often just outpaced population growth.
These figures can be interpreted as the frontier of coverage growth. Going much faster than this over a prolonged period of time simply has never been achieved in the past. There may be occasionally a country that grows its coverage faster, but that is then usually during a short period of time.

Using a combination of the linear extrapolations and extrapolations with the frontier rates of coverage growth, we can identify five groups of countries:

In this was we can take into account both past performance, as well as good – but realistic – future results.

The table below presents the number of countries that would end up in each of the five categories, broken down for urban and rural and for water and sanitation.

In urban water, I cheated a bit and put the frontier of coverage growth at 1 percentage-point per year. If in one sector, universal coverage could be achieved, it should be in this, I thought. And indeed, in almost all countries, full urban water supply coverage is possible (so without even having to go to the frontier growth rate). 117 countries could be added to the list of having water for all their urban citizens. But there are still some 20 countries that would not reach it. These are almost all countries that have had negative coverage growth during the past 25 years, and most of these 20 countries are fragile states, like Yemen, Chad and Haiti.

For rural water, most of the countries that are not likely to achieve universal coverage are in Africa, but also a fair number in Latin America and Asia. By definition, these include the countries that currently have coverage levels below some 77% (at frontier rate, during fifteen years a maximum of 22.5 percentage-points can be gained). It does include some upper middle income countries (like Colombia and Ecuador), which with their level of wealth could maybe beat the frontier curve.

An additional 90 countries could achieve improved sanitation for everyone in their cities – and that would be a great achievement. Still, some 40% of the countries of the world will not achieve universal urban sanitation coverage. This includes some giants like India, Indonesia and even the Russian Federation. The average coverage of the countries that will not reach this target will only be 69%, even at frontier growth rates. In other words, even if these countries grow their urban sanitation coverage at frontier rate, they will be far below universal coverage.

And – not unexpectedly – rural sanitation is really the sub-sector for which expectations need to be most modest. In this sector past performance was bad, and even if future results are very good (growing coverage at 1.5 percentage-points per year), we will be far off target in a bit less than half of all countries in the World. Many African countries have coverage levels of around 30%. Adding another 20% of coverage would be a great achievement over a 15-year period, but would only yield a rural sanitation coverage of around 50% by 2030.

Disclaimer to the SDGs

If we perform as well as the 10% star performers have done during the past 25 years, many countries – and particularly cities – can be added to the list of having universal access to water and sanitation services. Still, in a significant number of countries, not everyone can open a tap or visit a toilet on New Year's Eve of 2030. Maybe there should have been a disclaimer on the SDGs on what can be achieved during a relatively short period of 15 years. But that doesn't mean those countries should do nothing. Rather the opposite; perform as well as your peers and make great steps forward, so that eventually there will be water and sanitation for everyone.

The real danger zone: can fragile states reach the water and sanitation SDGs?