Paris, s’éveille – waking up to the Paris Declaration

Jacques Dutronc's song sums up how the WASH sector is waking up to the Paris Declaration, cleaning up the mess of often uncoordinated aid efforts.

The Paris Declaration laid out the principles for aid effectiveness, including, ownership, alignment, harmonization, managing for results and mutual accountability, all commendable and logic principles, that few would object to. However, putting these into practice is taking time, as if slowly waking up and starting the day with small tasks, before one is ready to see the result of the clean-up. Our work on life-cycle costs – and broader aid effectiveness - in the Honduras WASH sector illustrates how messy aid to the WASH sector sometimes can be, but also what small steps can be taken to clean up things, towards the implementation of the Paris principles.

If a country wants to take ownership, it needs to have the information and criteria to be able to set the rules.

Let’s start with the wake-up call: the fact that the (rural) WASH sector is still highly donor dependent. The graph below shows the source of a selection of 41 capital investment projects in rural and small town water supply, carried out by FHIS (the Honduran Social Investment Fund). As can be seen, external sources formed the bulk of these, basically loans and grants both from development banks and bilateral donors. Ok, part of this are (soft) loans that eventually need to be paid back, so could be reclassified as coming from the national government. Contributions of national and local government, as well as from communities, are almost all in the form of matching funds. Only few of these investments were done fully with national funds. 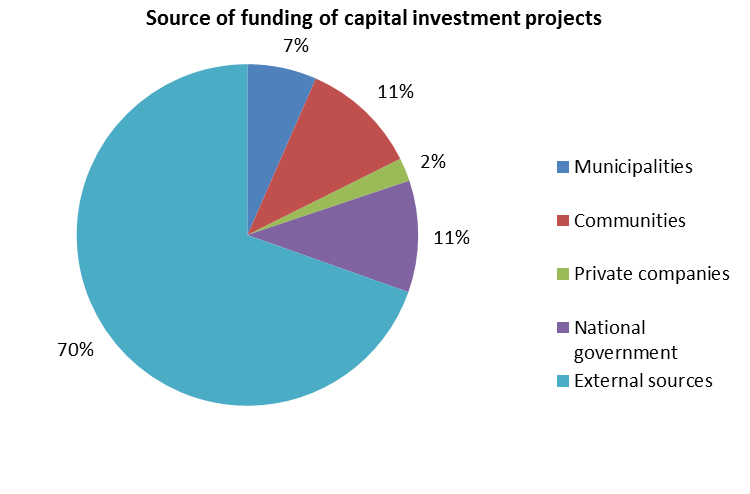 A further break-down of how these funds are spent shows a very messy picture. The 114 water projects we analysed were carried out in any combination of 4 different forms of procurement (including different forms of tendering and direct assignment), 4 different forms of project implementation modalities (including centralized by national government, decentralized by local government, and fully community-executed) and 5 different forms of programme management (for example with or without a dedicated project implementation unit). Fortunately, not all the 80 mathematically possible combinations were found. Still, these 114 water projects, funded through 11 different programmes, were carried out through a whopping 19 different combinations of project implementation procedures. The variety would even be bigger if we had included more detailed rules on for example cut-off lines (the maximum amount above which a project is not considered financially feasible) or co-financing percentages. Needless to say that this huge variety often causes confusion – when to use which procedure and why.

114 water projects, funded through 11 different programmes, were carried out through a whopping 19 different combinations of project implementation procedures.

Some of these different project implementation procedures are due to the government’s procurement rules, e.g. projects of more than a certain amount need to follow different tendering forms than ones that cost less. But the main reason for the large variation is simply because of demands and requirements from the funder to follow one procedure or the other. To my surprise, this is often considered simply as just a given. As one of the participants in the discussions on this commented: “oh, but you know, those exact rules for project implementation are defined by the funder”, without questioning whether that is the way it should be. If one of the principles of aid effectiveness is ownership, shouldn’t it be the government who develop sets of programme implementation procedures? If another principle is the alignment of donors with government’s systems, why then do the donors indicate which procedures to follow?

Lack of information on costs and effectiveness is one of the reasons for this situation. Neither donors not the government have had detailed data on how much these different modalities costs, or which of the implementation procedures is most relevant or effective for different types of projects. If a country wants to take ownership, it needs to have the information and criteria to be able to set the rules.

But Honduras is now waking up to the Paris declaration, as evidenced in some recent initiatives. One is the development of a harmonized sector budget, bringing all the flows of loans, grants and national contributions into one single budget overview. That is a first step to see which programmes are there, and how much they invest. Another example is the development of a national investment plan for water and sanitation. Instead of developing infrastructure based on whatever programme can be negotiated with funders, there will soon be a plan to which funders can buy in to. We hope to contribute as well by analysing information on the costs and effectiveness of different forms of project implementation, for example in terms of the average costs of the projects that were developed. So far, the results were disappointing: there is no indication that this is the case (or maybe we should take the old academic slogan of “no result is also a result” more to heart). Probably that is due to the fact that we have considered only the direct costs of infrastructure development (the physical works, the social process around it, and the costs of studies), but not yet the overhead costs of for example supervision, monitoring and programme management, which are likely to be different for the 19 combinations of project implementation. This will hopefully provide information for decisions on coming to a more manageable set of procedures– or probably sets, as probably there will be need for some diversity according to the type and size of project.

As one of the participants in the meeting said: “I can see that we are slowly creating some order in the water sector, slowly but steadily. But we need the information to do so”.  The wake-up call has been there, the mess in the house has been noted, and a good start is being made to clean up the rooms. With these tasks on their way, hopefully the aid funding Honduras receive for WASH can be used in a way that makes the sector buzz.