Elder Joe is the proud secretary of a water committee managing a handpump on the outskirts of Odumase town in Ghana. But the committee would rather manage a different type of system.

The handpump the committee looks after was installed last year. It, and Elder Joe's committee, are doing well. Elder Joe shows us the booklet with the bank statements and their account has been growing steadily over the past year. They had already been able to afford a repair to a leaking foot valve without any problem. Still, they are not happy. “Pumping the water is so heavy. We would prefer to mechanise it. Would that be possible?”. In the area, there are many what in Ghana are called “limited mechanised boreholes”, referring to a system consisting of a borehole, a motorised pump (working on electricity), an overhead tank, and one or two points with spouts, where people can fetch water for a small price. Elder Joe has aspirations to climb the water ladder, but why wasn’t that done when the pump was installed last year? Though we are in this area for research on spares and repairs, I cannot resist digging a bit deeper into this. While waiting for our transport, the intricacies and contradictions of water demand, and the assumptions we have, become clear.

On the one side of the road is another borehole with a handpump. People are fetching “basins” of about 40 litres for about 10 pesewas (US$0.02), which they pay to a woman who acts as vendor. On the other side of the road, another woman sells sachets of water for the same price. From the number of sachets that she has on sale (and empty ones that are lying around), it seems many people are happy to pay the 10 pesewas for the sachet. But Mrs Susana, the first vendor, says that people would be happier to pay even more for the basin if they didn't have to pump. She herself, at least, would prefer the limited mechanised system, as you then don’t have to pump, but just open the tap. It goes faster and you don’t have to queue so long. And the extra costs wouldn’t be so much. If you just dranks a sachet a day less, you can afford the limited mechanised scheme. 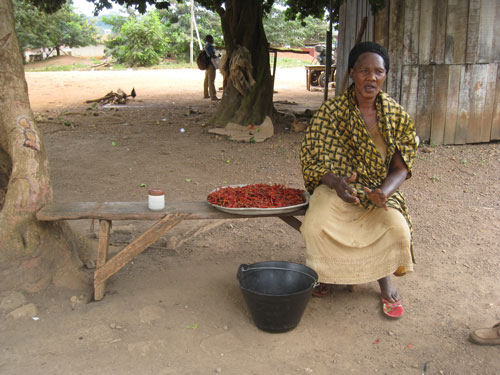 Mrs. Susana with her petty cash container, explaining she would like to have a limited mechanised borehole.

This is as much confirmed by the vendor at one of those limited mechanised schemes elsewhere in the area. She also proudly shows us the very basic system: there are no complicated switch boards – just an on/off switch for the motorised pump. We see that the filling of a bucket from one of the spouts goes much faster than through the tedious pumping with an Afridev. The vendor mentions that mostly she makes some 20 Cedis (US$10) per day, but sometimes up to 50 Cedis (US$25), when the utility system in town is not functioning, and when the people from town come to fill their buckets here. Whether that income is enough to carry out the repairs is to be seen. The system still hasn’t experienced any breakdown. But vendors and users seem happy with it – and the ones who don’t use the limited mechanised scheme aspire to it. 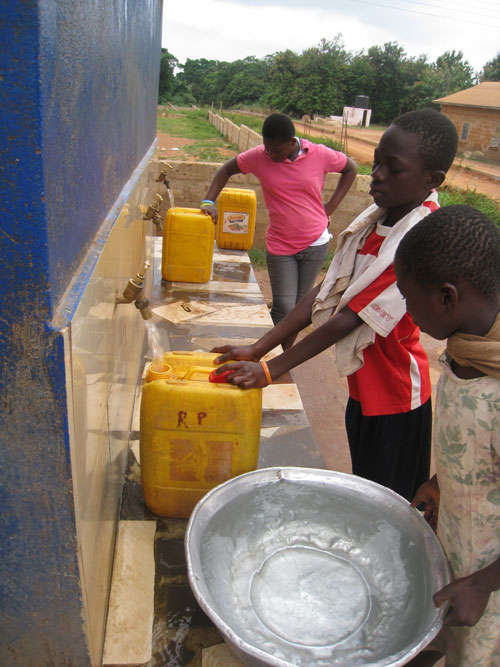 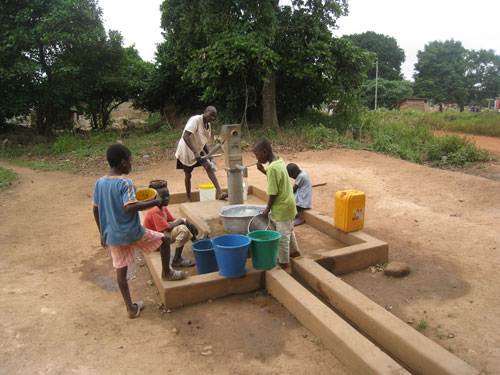 The relative ease of filling up buckets and basins at the spout of the limited mechanised borehole or the tedious pumping at the Afridev?

One of the engineers who accompanies us explains that the borehole in Elder Joe's area was developed as part of a programme that only offered handpumps, and no limited mechanised schemes.

So, why is this demand to climb the ladder not met? Why were such systems not provided in the first place? As Patrick Moriarty asked, what happened to the demand-responsive approach? One of the engineers who accompanies us explains that the borehole in Elder Joe’s area was developed as part of a programme that only offered handpumps and no limited mechanised schemes. So, yes, people could express whether they had a demand for water, but not for how they would like to get that water. Moreover, the guidelines stipulate that limited mechanised boreholes can only be installed in communities of over a certain population, as otherwise revenue might be too little to cover the costs. There is some logic to that. However, the communities of Mrs Susana and Elder Joe seem relatively well-off, this not being a remote rural village, but the outskirts of a trading town. Though difficult to judge on a short visit, this community seems to be willing and able to pay a bit more. And even though this neighborhood is too small to meet the criterion for a limited mechanised scheme, it could make up for that by the fact that it is relatively well-off.

As rural villages turn into small towns, people prefer to spend money – rather than time – on water, and their demand for water of potable quality changes. What are the extra costs of upgrading the handpump to a limited mechanised scheme, as compared to what they would have been if a limited mechanised scheme had   been constructed from the outset? Maybe it is time to dig up the handbooks on the demand-responsive approach, and ask ourselves if we are really responding to demand if we give people the choice between an Afridev and an Afridev? We need to go beyond responding to just a “demand for water”, and provide a response to a “demand for a specific level of water service for a specific price” – something that I always thought the demand-responsive was all about. In that way, we can meet the aspirations of people like Elder Joe and Mrs Susana to have a higher level of service, even if that carries the constrained-sounding name of a limited mechanised borehole. 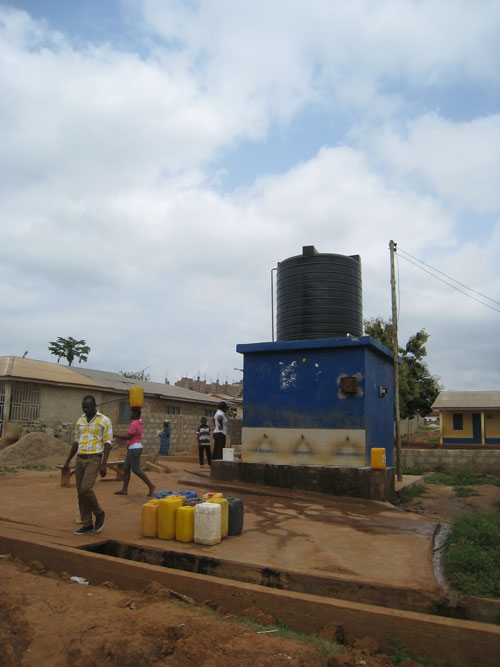