Catholic Relief Services (CRS) and government are looking for innovations in their work with smallholder farmers and communities in Lesotho to strengthen their livelihoods and to conserve the environment.

CRS Lesotho has supported the development of smallholder irrigation systems in Lesotho for more than five years. The overall performance of these schemes is below potential and expectations. There are concerns about the financial sustainability of the systems. Farmers are unsure about the costs and returns; some have abandoned the schemes; others prioritize rain-fed agriculture and use the irrigation systems in a supplementary manner only. In addition a number of technical problems are reported, which in itself are minor in most cases but are not solved by the scheme committees, which leave the schemes dysfunctional.

In 2014 CRS launched the Food Security Program Support Project, an initiative that was designed to tackle natural resource management (NRM) issues within Lesotho. In an effort to create a more long-term sustainable approach to food security and climate change adaptation in Lesotho, CRS has requested IRC Consult to support this new approach with experiences from the Multiple Use water Services (MUS) and Life-Cycle Cost Approach methodologies. These approaches should make the irrigation schemes a sustainable part of the larger NRM and livelihoods solutions.

Lesotho is a landlocked kingdom encircled by South Africa. Its ecology is fragile because of its mountainous topography, thin soil layer, and limited vegetative cover. The country is highly vulnerable to extreme weather conditions including floods, drought, and early and late frosts.

During the workshop, facilitated by me, with national and district staff from the Ministry of Agriculture and educational institutes, the engineers confirmed that they recognize the CRS challenges with smallholder irrigation schemes. The participants agreed that a key problem is that the farmers are not always ready or convinced of commercial farming and prefer to focus on farming for subsistence, avoiding taking higher risks and making the extra efforts. However, both government and NGO staff believe that in principle there is sufficient potential for using smallholder irrigation schemes. 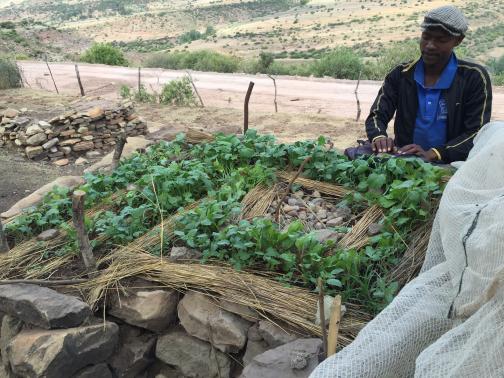 The day after the workshop a field trip was made to the village of Mokhopa, to better understand the challenges faced by the scheme. It turned out that the scheme was less of a failure in this village as was believed by CRS. The scheme was still in use, however not fully according to the original design. About half of the farmers in the command areas had abandoned the system and the remaining farmers continued to use the system half-heartedly. On the one hand they carried out small repairs, but allowed the available volume of water to dwindle. On the other hand they were re-thinking the way to organise themselves. No longer aiming to jointly work the fields, but still use the committee for collectively buying seed; managing the irrigation schedule and bringing the products to the market. The latter is a sign that still a sense of ownership consists.

The participants of the workshop agreed that not all people that own plots of land in the command area of the scheme, are willing to be commercial famers, but prioritise other ways of improving their livelihoods. It was also noticed that the drinking water supply schemes (tapping from other smaller springs) were actually providing good opportunities for subsistence and potentially also commercial farming by those households that don't own land in the command area. The keyhole gardens are being picked up enthusiastically, in particular by elderly people. The way forward will be that government, CRS and educational institutes will discuss a partnership for local-level Integrated Water Resource Management. CRS will propose that together they will start a pilot with strong community participation to create business models for subsistence and commercial farming, using both irrigation and domestic water systems.