Making a plan to make a plan

The COMAS – Municipal Water and Sanitation Committee – of the municipality of El Negrito (in the Department of Yoro, Honduras), is strongly committed to providing universal water, sanitation and hygiene (WASH) services to its citizens. But it needs a plan to get there. And it needs to make a plan to develop such a plan.

In fact, the COMAS, a body made up of municipal councilors, a water and sanitation technician and representatives of civil society, embarked already on the drafting of its municipal WASH plan two years ago. It realized that reaching the vision of everyone in the municipality enjoying water and sanitation services needs careful prioritizing investments; and not only of investments in new systems, but also of maintenance tasks and support to water committees. It considered that having a municipal WASH plan would help in that.

So, the COMAS hired some enumerators and full enthusiasm, they started collecting some baseline data. But with data of some 40% of the communities collected, the money ran out. At that moment, also local elections were held, and part of the membership of the COMAS changed. And the process stopped there.

Now that a new COMAS is installed and settled in, it is time to take up the process where it had stopped. Because the need for such a plan is still there. Sergio Varela (one of the councilors) mentioned: "We now prioritize investments based on requests. If a committee needs to have pipes for an extension or needs support in getting itself established as legal entity, we review the request and give advice for approval or not". And that approach to some extent works to address immediate needs, but doesn't allow for knowing the priority actions to reach full coverage. 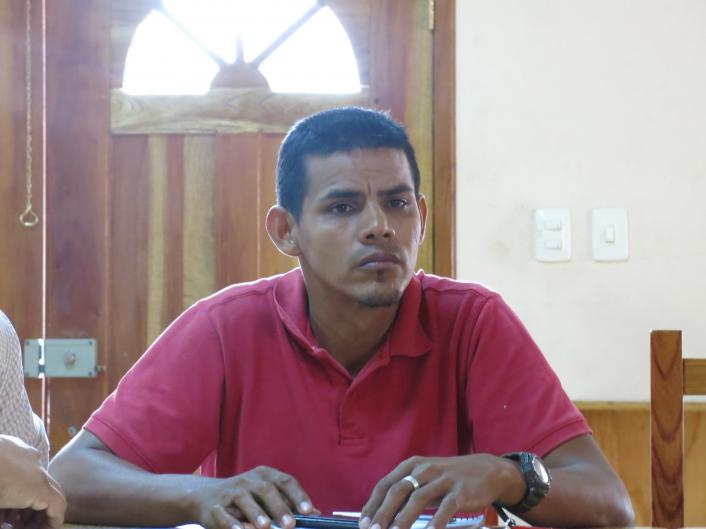 Sergio Varela, councillor at El Negrito municipality: we decide on the basis of requests, not on the based of a prioritized plan

Worse, on my question what the municipal budget for water sanitation is, the first response was: "we don't know". Ok, that triggered a bit of a debate, and bit by bit, the COMAS members were able to mention some of the line items, like a 75,000 US$ counterpart fund to a WASH programme, carried out by the NGO Water For People. But, if the municipal body responsible for WASH doesn't know the municipal budget for WASH, it becomes difficult to prioritize.

"What is your budget for WASH?"

Water For People and IRC are both members of the Para Todos, Por Siempre (Everyone, Forever) initiative in Honduras. This initiative seeks to achieve universal coverage to sustainable WASH services in some 29 municipalities across the country. El Negrito is one of them. And as also mentioned in a recently issued statement issued by both organisations (together with WaterAid and Aguaconsult), local governments are key to that. Municipalities are responsible for providing services to their citizens. But in order to fulfil that role, they need to have a range of capacities in place. They need to have a local institutional structure in place, dedicated to WASH. In Honduras, the COMAS is an essential part of that structure, as the place where the municipal authorities coordinate and plan together with civil society. But they also need to have instruments like a municipal WASH plan.

Over the coming year, as Para Todos, Por Siempre initiative we will support the associated municipalities in developing a municipal WASH plan. And as the experience of El Negrito shows, you first need to have a plan to make a plan. You cannot just start collecting baseline data. You need to have a budget for making the plan itself. You need to know what the municipal budget is, or what financing a municipality can receive and dedicate to WASH. And you need to make use of existing information. We will work therefore on methodologies and tools that municipalities can use, like SIASAR for baseline data and certain costing tools. We will also support municipalities in thinking through what a plan needs to entail. Past planning efforts have often resulted in long wish-lists of investment projects. And sure, those are needed, but that is not enough. Municipal plans need to make provision for maintenance and support work. And as Onelia Castellano, one of the councillors and COMAS members said: "the plans should also contain a chapter of our own functioning and institutional strengthening. The COMAS is a key institution and has gained recognition, but it also needs its own budget and we also need to strengthen our own performance in coordination and planning".

After the stalled experience of developing the municipal WASH plan a few years ago, the COMAS of El Negrito is now well-placed to pick it up again. But it needs support in planning to make a plan. Para Todos, Por Siempre is committed to working with the COMAS or El Negrito and of other municipalities in Honduras in doing so.