Out of IRC's 50 years of existence, retired Communications Director, Dick de Jong spent 30 years with the organisation. We asked him to reflect on memorable moments and share his views on IRC's future.

Read the complete interview to find out more about Dick de Jong's story.

What is the first thing that comes to your mind when you think of IRC?

My first impression and knowledge of IRC was in May 1978, when I was working in Bangladesh with UNICEF for the International Year of the Child. Mr Kenn Gibbs, then Chief Water of UNICEF in Bangladesh asked for communications help for a WASH pilot project. I had no background in water, so he advised me to read two books, written by Christine Sijbesma from the IRC. He referred to the water experts at IRC as the "preachers of the Netherlands". That was my first knowledge of IRC.

What was the next step?

A few years later I saw an ad in the local newspaper that said that IRC was looking for a public information officer with 3 years of field experience. So when I got back from my 3 years in Bangladesh, I applied for the job. I still have my notes of the meeting I had with Mr. Hofkes. One of the most interesting things I wrote down is that IRC needs to apply a more commercial approach. This was in 1982.

How would you summarise IRC's main communication activities from this moment on?

IRC started out as a reference centre. We used our library to talk to people from all over the globe and make connections in the sector. Drawing from these meetings we started developing international briefing programmes. After 2 years, we realised that all country projects struggled with similar issues. So from briefing programmes we evolved into organising training courses. In 1987, we started working with the Management for Development Foundation (MDF) on the Management for Sustainability in Water and Sanitation programme. So you see, sustainability has been part of our work right from the beginning.

The 1980s were strongly influenced by the International Water Decade which was proclaimed by the United Nations. During these years, IRC was asked to help with public information and promotion activities.

In 1991, when it became clear that we had not achieved the decade's goal of full coverage, the Water Supply and Sanitation Collaborative Council (WSSCC) was formed (of which IRC is a co-founding member). Not long after that, the Gender and Water Alliance was formed, for which IRC acted as the secretariat for 6 years. As part of our work for WSSCC, we wrote a book that included case studies for which communication made a measurable difference in WASH programmes. Success stories included the Rural Sanitation Programme in India and Bangladesh and the Facts for Life Programme in the Philippines. 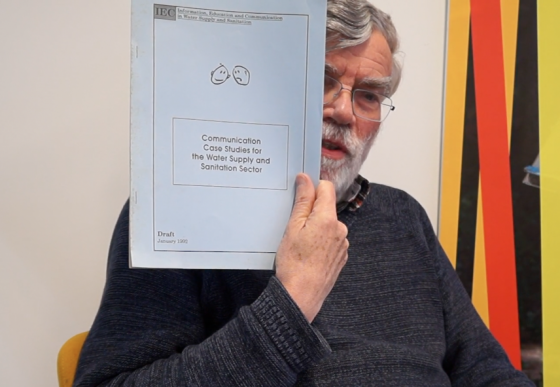 In 1994, we held our first Community Water Management workshops leading to a participatory action research programme on community management which ran until 2002. In this programme, six countries (Nepal, Pakistan, Cameroon, Kenya, Colombia and Guatemala) and 23 villages were approached in order to ask them about their water problems and to see how we could help them solve their issues. It was action research on the ground, we helped train local committees, chair people, secretaries and helped them raise their voices towards a slightly higher level so they could also ask for support themselves.

We created six country programme videos and the so called Seventh Video on Community Water Supply Management. This is a 15 minute international advocacy video that played a major role in putting community management on the agenda of the sector.

Which anecdotes from the past 30 years are most memorable to you?

For me the Seventh Video is one of the best experiences I was involved in. It was in 1999 when Ton Schouten, originally a documentary filmmaker, joined us. He started working on the national videos and asked if I would like to help him create the Seventh Video. We worked in the studio, bouncing back and forth between scenes of the video for two full days - I will never forget that. The video focuses on topics that are still relevant, such as governance, gender, corruption or local operational maintenance. The most important message is that governments, donors and NGOs need to listen to communities and respond to what they need in order to come up with meaningful programmes.

Since it appeared, I have seen it used on all levels: for policy-making, education, training sessions with journalists, even at international water conferences.

The most amazing anecdote comes from 2014. Two years after I retired, I travelled to Nepal to help the local resource centre improve their communications. We were six hours out of Kathmandu, in an EcoSan resource centre. Glancing through the visitor book of the centre, I saw a statement from a water and sanitation committee in Nepal that came from one of the villages involved in the Community Water Management programme. About 18 community members paid their own way to get a training at this resource centre. It was amazing to see that they had been able to develop on their own, which was the idea of the programme all along.

What part of your work in the past 30 years feels the most valuable to you?

If I look back at my first job interview, it is interesting to see that although IRC was searching for a technical guy, they hired me, a journalist. So that made the difference, I believe. I have contributed to the IRC Newsletters, the Water Newsletters and the Source Bulletin. We released the first Source Bulletin in 1997 together with the WSSCC and the last one, before E-Source newsletters and IRC's current newsletter, Amplify, was number 66. So my name has been on a newsletter for 25 years.

In 2014, I met Mr. Ganesh Shah, former Minister for Environment, Science and Technology of Nepal during a visit to spice up communication for WASH at our former partner WASH Recourse Centre Network Nepal. He used to have a subscription to our newsletters and still uses some of the articles in his advocacy trainings. For example a story about girls who dropped out of school in Africa because of lack of safe WASH facilities and menstrual hygiene management. This anecdote shows how my 30 years of working for IRC and with partners comes together.

How would you formulate the overall role of IRC in the water sector?

Many people in the sector look at IRC as a sort of repository of sector information. We had ministers asking for certain policy documents that they did not have in their country, but which we did have in our office in the Netherlands. Although this role is less important now, IRC still builds on this past in a way. We have always been collaborating with others, brought organisations together and we were able to publish on that at the same time. Now, IRC is teaming up with selected partners in selected countries, which is a great improvement in my opinion. IRC's role is shifting greatly but it is still based on the same drive of having relevant material and expertise - now directed towards more precise areas in specific countries on which larger, global change can be built.

What is your message for IRC's and the sector's future?

If I look back on the history of IRC, I pick two issues: one that is on the issue of gender on all accounts - planning, monitoring, segregated data - and that links to governance issues. IRC should think out of the box to see how gender and governance can be connected and where joint action with commercial groups may be possible.

How do you think that IRC's systems approach relates to this vision?

Because earlier infrastructure-oriented approaches failed, we have to get local governance issues right and keep them well supported so that problems can be solved locally. For this to be achieved a systems approach is needed. We have to learn lessons from the past and if I look back on the past 30 years, I believe we have done so.