Local political leaders: go for quality and systems that last

Sangeeta Ramola is the former Pradhan (president) of the Gawana Gram Panchayat (local government), in the State of Uttarakhand, India. Her work and effort shows the importance of local political leaders in achieving access to rural water supply that lasts.

When she became Pradhan in 2008, the water situation in Gawana was dire. There was a government-built water system, but it had only one standpost. Moreover, the quality of the construction was poor, leading to lots of leakages. Often not more than a trickle of water came out of the one standpost. When water wouldn't come, they had to walk three kilometers to a mountain source to fetch water.

Luckily, during her work in a neighbouring village, she came across the work of Himmothan an initiative of the Sir Ratan Tata Trust. Under this initiative, water supply systems are developed in the rural villages in the Himalayans, together with local partner NGOs, such as the Himalayan Institute Hospital Trust (HIHT) and communities themselves. Sangeeta worked on that initiative as a community mobilizer. Once she had become a Pradhan, she convinced the people in her Gram Panchayat to also apply for a water supply scheme from Himmothan. 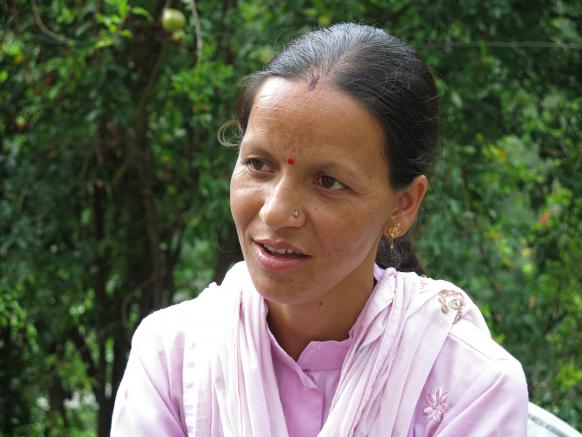 The application was not only a request for support, but also a commitment from the community to improve the situation. Himmotan requests a 10% upfront contribution to the water system from the community, amounting to about 50 US$ / family. Moreover, 100% household sanitation coverage is required before work on water supply can start.

But contributing that was just the first part. Another point of struggle was equity. The topographical situation in the area meant that several households couldn't be connected to the water system. They were located at a higher elevation than where the tank could be, and hence wouldn't receive water. Himmothan found a solution: those houses that couldn't be connected would get a rainwater harvesting tank. Even Sangeeta's own house lies at too high an elevation. So, ironically enough the woman who brought a water system to the village, cannot enjoy it. She has to use the rainwater harvesting tank – though she is also perfectly happy with that.

A final point of commitment was around sustainability. A water committee would need to be formed and villagers would be expected to cover maintenance costs and contribute labour to some of the hard maintenance work, like washing the filters. Sangeeta worked hard to form such a committee and organise the community around the maintenance.

Sangeeta is now very satisfied with the results. Himmothan have really put lots of emphasis on preparing the community to sustain the system, and that is paying off, as the system still works fine. "I would recommend any Pradhan to apply for water supplies to Himmothan; go for quality and for things that last".

This recommendation is being picked up by other Pradhans. One such a village is Kakru in the Buyasari Gram Panchayat. Also here, people need to walk two kilometers to fetch water. There are still remnants of an old water system there. That was developed in 1980 by the government. But the government didn't maintain it well. Only during the rainy season, water comes trickling through. In all other periods, they have to go to the far away source.

Villagers claim they have long been in the unknown about how to obtain a water supply system. The previous Pradhan has applied once to the State government for funding for a new scheme, but nobody knows what happened to that application. Now there is a young and motivated Pradhan, Shri Jai Prakash. He has applied again to the State water supply programme, and is active in following up and calling, so that the application is reviewed by the Government. But what he really would prefer is a system developed by Himmothan, as he has also seen the success of the Himmothan-supported water supply systems in neighbouring villages. He is therefore also going to pursue an application via this NGO route. 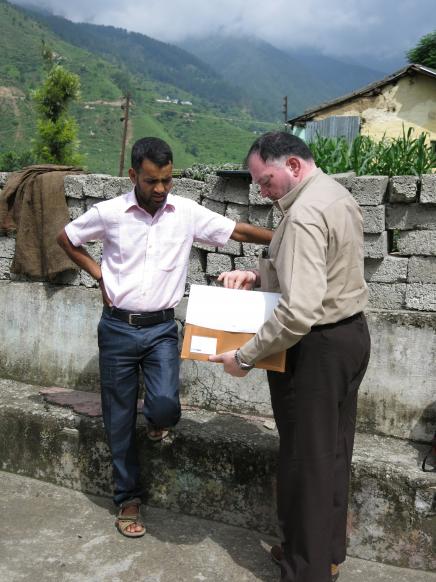 Local political leaders have an important role to play in the efforts to reach universal coverage to water supply. They are the ones who can mobilize investment funding needed..

Local political leaders have an important role to play in the efforts to reach universal coverage to water supply. They are the ones who can mobilize investment funding needed: from the national or State government and from NGOs. They are the ones to materialize the vision that everyone in a village can have an improved water supply, if not one way around (through a piped supply), then the other way around (through a rainwater harvesting). And they are the ones to motivate their own communities to contribute to sustaining the systems, so they deliver water of quality, through systems that last.