"Human beings are being used to plug the gaps in failing sanitation systems" – Bezwada Wilson.

#InDeepShit is the title of an event I attended on Saturday 22 April 2017. Talking about toilets and who is able to use one – or not; talking about who cleans them and how – sometimes literally with their hands deep in shit. I know this does not sound like an event a sane person would like to join on their day off. But you are mistaken! And I was not the only one. Around 80 young and critical people in the room showed that this was an event important enough to spend their free Saturday morning on.

I was triggered by the quote on the invitation saying: “Any human cannot clean somebody's shit for the sake of roti. This is Independent India?”. The quote is from Bezwada Wilson, an Indian activist against manual scavenging. He was one of eight very interesting speakers invited to address the meeting. They covered a wide range of challenges: from barriers disabled people face when wanting to use a toilet (“we can’t hire you because we do not have a toilet for you”), to safety issues for transgender people (“we have progressive laws on paper, but this is not what I encounter in real life”), to accountability and manual scavenging.

Almost nine years ago Bezwada Wilson was an inspiring and eloquent speaker at the IRC Symposium on Urban Sanitation for the Poor. Nine years and the same problems still need to be addressed. At that time he said: “sanitation is much broader than simply toilets. Effective sanitation also requires hygiene education – people have to change their practice as well as get access to toilets. It is inevitable that the main focus is on the early part of the chain (building toilets), but there is increasing awareness that the most difficult problems relate to the removal of faecal sludge […]. In many cities, treatment, disposal or reuse is not managed” and - as Bezwada Wilson put it so eloquently in his presentation during the symposium: “human beings are being used to plug the gaps in failing sanitation systems”. 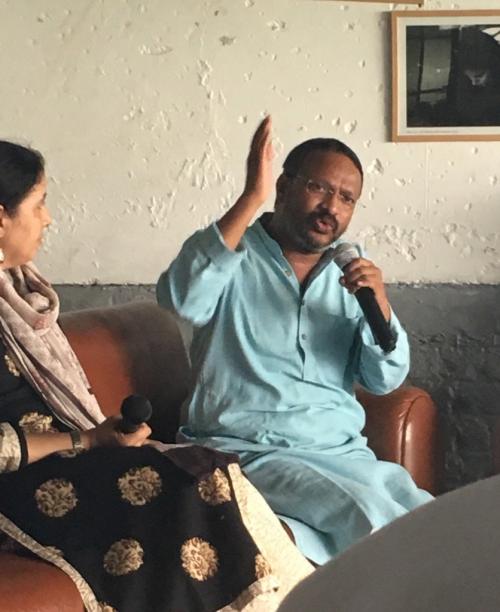 Nine years later, this is exactly what is happening with the Swachh Bharat Mission. With the hard deadline of 2019 to reach the target of a toilet for every household, state and districts seem to have no choice but to focus on constructing toilets and on doing it fast. More than 700 million toilets to go…. There is no time to focus on use, no time to focus on what is happening with all that human waste after using the toilet, no focus on what happens when the pit is full, and no focus on who is emptying the toilet or how it is done.

Nine years of activism and there is still manual scavenging. Bezwada Wilson has not changed; he seems more motivated than ever. And with reason! It’s not only about dignity, safety is a huge issue too. Workers are dying, even in 2017, he points out referring to the recent sewage plant accident in Noida.

Chief Executive VK Madhavan from WaterAid India, however, also sees positive developments. He acknowledges that we cannot change where we are born, or in which family or caste. So true and yet so easy to forget: that privilege – or not – is no contribution of us as individuals, no contribution at all. What we can do is provide a space to those who are denied to speak up or to interact with the government. That is why WaterAid India together with Youth Ki Awaaz organised this event. Youth Ki Awaaz is India's largest platform where young people can publish their stories to drive impact. 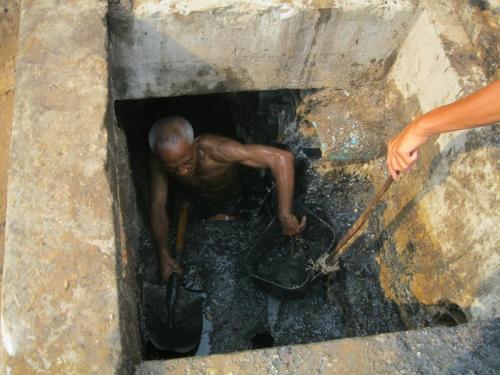 Any shortcuts to change?

In India more and more authorities start to acknowledge the problem. Our role is to provide space to make this happen. It all goes terribly slowly though and I asked the panel if there is no shortcut to change. Nobody could answer that question. Can you?

WaterAid India's blogpost on their campaign 'In Deep Shit'