Lessons from the National Sanitation Campaign. 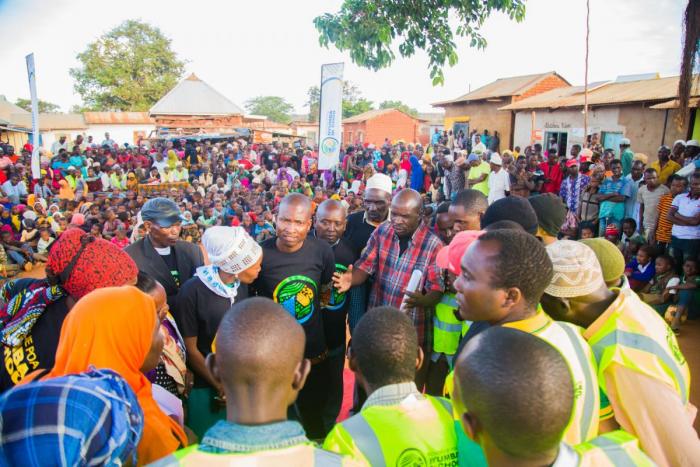 In 2012, the Tanzania government introduced the National Sanitation Campaign to accelerate sanitation coverage, particularly in rural areas. The first phase of the campaign which ended in 2016, relied heavily on training of public officials and dissemination of information and education to generate public demand for sanitation facilities, particularly households. The campaign made some progress, but it suffered from its relatively low priority, poor monitoring and reporting of results, and ineffective deployment of financial resources. To mitigate these shortcomings, the government embarked on the second phase in 2016 and relaunched it as Nyumba Ni Choo campaign in December 2017.

The Nyumba Ni Choo set an ambitious goal to eliminate open defecation (OD) by 2021 and ensure that every household in Tanzania uses ‘Choo Bora’ (an improved toilet) by 2025. It has now concluded four years of what appears to be a successful campaign. It has mobilised high-level political support and evolved into one of the most successful government-led campaigns, a unique brand and platform with value, mobilising more than 8 million Tanzanians to build and upgrade their toilets. Official reports by the Ministry of Health show that by June 2021, access to improved sanitation had increased from 42% in 2017 to 70% alongside the reduction of open defecation from 7.2 % to 1.3%.  This is a remarkable achievement. Below is my personal reflection of the lessons learnt from the campaign implementation

Planning and design of a large-scale campaign such as this can be time-consuming and a complicated process. In countries like Tanzania where the sanitation subsector has many players and fragmented initiatives, it can be very challenging to coordinate stakeholders to come up with a campaign idea that would work. In our case we spent two years (2015-2016) researching, planning and designing the campaign together with the Ministry of Health. This is because we wanted to generate evidence and insights on what would work in our context whilst learning from success and failure in the past. Two years might sound too long but provided us with sufficient evidence and time to engage all stakeholders to buy into the design process. This helped us to create a unified identity for the campaign which everyone wanted to be associated with.

Ensure ownership from the top

Sanitation was high on the political agenda in Tanzania in the early 1970s when the former president Julius K. Nyerere led the Mtu ni Afya campaign which helped the majority of Tanzanians to acquire basic toilet facilities. Since then, sanitation has had a low priority both in terms of planning and actual allocation of resources, leading to lack of progress of improved toilet coverage for most households. Learning from the Mtu ni Afya campaign, the Nyumba ni Choo adopted strategies that helped to elevate sanitation to the top of the political agenda in Tanzania.

First, prior to launching the Nyumba Ni Choo campaign, we implemented a bridge PR campaign namely the #NipoTayari (I am ready). For example, the Ministers of health, water and local government were photographed personally holding the Nipo Tayari frames as a symbol of commitment and readiness in support of the national campaign to end open defecation. Their photos and commitments were captured and amplified through radio, TV and digital platforms to ensure we can later follow up on the commitments they made to the public. The use of camera to inculcate a sense of accountability of commitment was powerful enough to get the majority of national and local leaders, government officials, development partners, and private sector personally aligned to the core mission of the campaign.

Second, the UK Government through the Foreign, Commonwealth and Development Office (FCDO) channelled some of the campaign implementation funds directly to the Ministry of Health and Local Government Authorities to support coordination and monitoring activities at national and local levels, with each LGA receiving an average of US$ 30,000 per year. While this is a small amount compared to the needs, channelling part of the funding through the government system helped to ensure government ownership and accountability of government officials in the delivery of campaign results. One of the successes, for example, is that the government was able to use part of the funding to strengthen the National Sanitation Information Management System (NSIMS). The NSIMS is currently being used nationally as a main source of data for monitoring, and reporting progress on sanitation in Tanzania.

Third, during implementation we ensured a whole-of-government approach was taken, where local government officials developed the plans and activities to achieve targets committed by regional and district commissioners. To ensure accountability of results, baseline data and monitoring relied on the government’s NSIMS. Each quarter the National Sanitation Campaign Coordinator (who was appointed by the Minister of Health with high-level backing and position, politically savvy with unlimited energy) organised meetings around what were termed as the sanitation league tables to monitor progress and iron out implementation issues. The use of NSIMS (regardless of the quality of data reported) to monitor performance helped to ensure the system is being used nationally and made government officials focus on implementation.

Do not Educate - build a campaign around the drivers of change

Nyumba Ni Choo didn’t rely on training and education to generate demand for household toilet improvements. Instead, the campaign was based on the insight that Tanzania is modernising rapidly, with people upgrading their homes, but leaving their outside toilets in a ‘traditional’ state. Built around the ‘big idea’ that a household is not fully modern without a good-quality, modern toilet, the campaign employed reality TV shows, live engagements and mass and digital media postings, all targeted at motivating both the government and general population to improve toilets. By moving away from educating the public to using modernity as a driver of toilet improvement, the campaign successfully resonated with a large segment of the population and made toilets a topic of national conversation which resulted in a major uptake in the rate of toilet building.

Experience from Nyumba ni Choo shows that no single partner (public or private) can deliver a large-scale public campaign such as this alone. There are reasons for this.

First, delivering a campaign such as Nyumba Ni Choo, requires assembling a multidisciplinary team with experience, diverse skillsets, and capacities in behaviour science, research, marketing, professional creatives, media, sanitation specialists and project management. Most of these skills aren’t readily available in the public sector but even when available in the private sector, they would require an association of several local and international firms to assemble an optimal team to deliver the campaign.

Second, sanitation is a public good and requires government and political leaders to devise country-led reforms. In our case, we needed the Ministry of Health to coordinate implementation efforts of development partners and other line ministries as well as to provide oversight function to ensure a contracted Social Behaviour Change Communication (SBCC) service provider and local authorities deliver results and are held accountable in line with the campaign goal.

To ensure efficient and effective delivery of results, the Nyumba Ni Choo campaign therefore adopted a private public partnership approach where the government through the Ministry of Health led the coordination and provided the implementation oversight of the campaign. The private sector- i.e., the SBCC service provider was then contracted to focus on formative research, strengthening supply chain, creative designs, production, and distribution of campaign materials. Partnering with private sector helped the government to leverage skills and platforms which are efficient in delivering results. For example, an assessment of value for money of the Nyumba ni Choo for the past two years shows that the costs of reaching one person with campaign messages through Nyumba Ni Choo is about half of the costs used to deliver similar campaigns. This shows that that the campaign is efficient in reaching the target audience.

An evolution: from a campaign to platform

Nyumba ni Choo has evolved from being a one-off campaign to a brand and platform with value. A Geopoll survey conducted in mid-2021 showed that 97% of the general population is aware of the Nyuma Ni Choo brand. The existence of this brand and the extremely high awareness of it nation-wide provides a huge opportunity for sustainability as platforms can be used and pivoted in different ways. For example, when the first case of COVID-19 was detected in Tanzania in 2020, the government used the Nyumba ni Choo platforms: mass media, digital and on ground activations to disseminate COVID-19 preventatives messages to 14 million Tanzanians. At the beginning the platform was quickly pivoted into #Mikono Safi Tanzania Salama (‘Clean Hands Safe Tanzania’) campaign which prioritised handwashing with soap as first preventative behaviour in tackling the COVID-19 pandemic. Later it evolved to ‘Usichukulie Poa, Unategemewa’ (Don’t take it easy, you are depended on) campaign which persuaded people to practise other preventative behaviours (e.g., social distance and wearing masks etc.) to reduce the transmission of the corona virus. Following the introduction of COVID-19 vaccines in Tanzania in June 2021, the Nyumba Ni Choo platform is currently supporting the Government to implement a new campaign namely “Sasa ni zamu yetu” meaning ‘it’s our time’ as a call for urgency to get  Tanzanians vaccinated.

As a platform Nyumba ni Choo has the potential to leverage financial resources from the government, private sector, and other development partners to sustain some aspects of the campaign post-FCDO support. In fact, in addition to mobilising millions of Tanzanians to upgrade their latrines, the creation of the Nyumba ni Choo brand is perhaps the most valuable asset that has been created, and one which can be used in a variety of ways going forward. Indeed, it has already proven its worth by enabling the Tanzania government to quickly respond to the COVID-19 pandemic, and now in tackling vaccine hesitancy. It has also been able to demonstrate effectiveness with respect to its initial mission in terms of producing an increase in the rate of improved toilet coverage in the country. So, it makes eminent sense for the donors and government to make use of such a highly adaptable brand in future public health endeavours.

Disclaimer: Lukas Kwezi currently works for the UK Foreign Commonwealth and Development Office (FCDO) as Water and Sanitation Adviser, based in Dar es Salaam. He writes blog posts in his spare time. Though he may talk about the work he does in the sector, this is neither a corporate nor a political blog and the opinions and ideas expressed here are solely his own, not those of his employer

#NyumbaNiChoo campaign: Having a toilet is modern and cool