How much does it cost to make you wash your hands?

An analysis of hygiene effectiveness and costs in Bhutan.

Hygiene promotion rarely stands alone as an intervention, but instead tends to be just a small part of a larger sanitation programme. This means that there is a lack of data around hygiene promotion and in particularly, cost effectiveness. Under the Sustainable Sanitation and Hygiene for All programme (SSH4A), IRC has developed a hygiene promotion cost effectiveness study approach that is currently being tested in the Samtse district of Bhutan. Later on this study will also be tested in Tashigang district of Bhutan.

This study aims to guide the SSH4A programme, offer improvements and support decisions on where to adapt or refine hygiene interventions and where best to allocate financial resources. It also aims to support decision makers at the Ministry of Health by providing a greater insight on current costs and effectiveness of behaviour change communication interventions.

Outline of the study

The study consists of two phases: a baseline and a final study. The baseline study took place before the start of the hygiene promotion intervention in Samtse. The midterm update took place two years after the start. The final study will take place after the intervention, which will be in January 2017.

During these two phases the hygiene practice levels of households are measured. The study will show if the level decreased, stagnated or increased with the intervention. Also, the costs for hygiene promotion within this intervention are calculated.

The hygiene promotion intervention in Samtse consisted of 211 two-day community development workshops; with one day being allocated to hygiene promotion, which included activities on hand washing and toilet use. In addition to this, follow-up visits were undertaken and health advisors whom promote the principals of hygienic behaviour have conducted home visits and outreach clinics. Calculating all the costs collected so far on these interventions, from staff costs and travel costs to lunch refreshments, we come to an intervention cost of EUR 1,35 per person for the population of the district.

*The third indicator was added at the request of the Government of Bhutan to get an idea of how drinking water is handled. The SSH4A programme has no scope for interventions on safe drinking water management and therefore the cost per person does not include intervention costs for safe water handling. 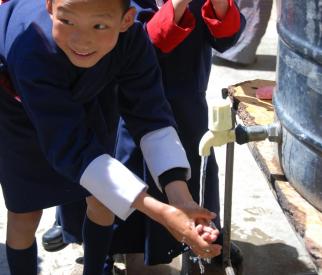 From this we highlighted all the intervention costs that were specific to hygiene promotion and looked at these to see how cost effective the activities had been, to enable us to get an idea of what the costs of improving hygiene practice behaviours are.

Samtse is located in the Southwest region of Bhutan, where it borders India. It is the largest Dzongkhag (administrative and judicial district) with around 60,000 inhabitants. At 47%, the district has one of the highest poverty rates in the country, and has the lowest improved sanitation coverage at 41% (Bhutan Multiple Indicator Survey 2010). However, since this date progress has been reflected in the SSH4A baseline data. The sanitation coverage now stands at 53% of which 75% of the population in Samtse has an improved sanitation (SNV, Baseline 2014).

In the programme annual monitoring takes place and this monitoring includes the same two indicators we use for the hygiene effectiveness study. That allowed us to get an idea of progress. This midterm update gave the following results: 53% of households now (compared to 46% in the baseline) own and use a functioning toilet that separates the user from faecal matter; 44% of households now (compared to 42% from the baseline) have a specific place to wash their hands within ten metres from the toilet, or there is running water and soap available at the station. There has been a 10% increase in households that have a practice level of basic or above for either one or both indicators.

Therefore we can see that whilst there has been an increase in households that have improved their hygiene practices for a relatively low cost, there still needs to be much more work done in this area to improve the hygiene practice levels in Samtse. In particular, hygiene promotion activities should have a stronger concentration on hand washing practices, as households have performed particularly poorly in this area and have seen a very small change in practice.

The next step of this study is to look at households practice levels in Samtse as part of the final phase of the study and what it takes to climb from an ineffective or limited practice to a basic or improved hygiene practice level. Also, the research will be replicated in Tashigang district.

Hygiene promotion in Bhutan : does it work and at what cost?