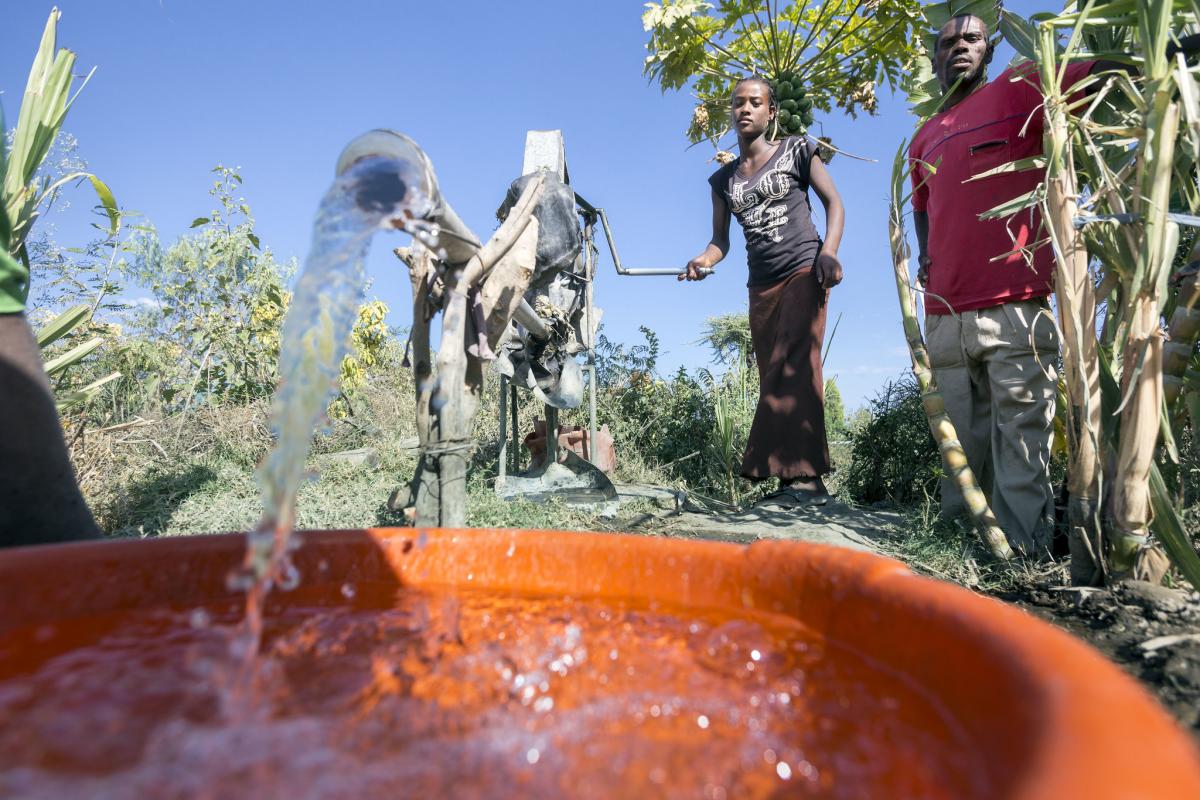 As we (re)discover groundwater this World Water Day, let's not just look under our feet and think about the resource that lies down there.

This blog was co-authored by John Butterworth and Lemessa Mekonta.

Although 99% of our liquid freshwater is groundwater, we often overlook it. Groundwater is normally hidden in the spaces within the rocks and sediments beneath us and we might see it emerge at a spring if the lie of the land allows. Getting that water out of those tight spaces has been a source of human innovation for millennia and we are still inventing new ways to do it.

Solar pumping for example is now reducing the costs and reducing some of the negative impacts of other ways of lifting up water.

We go to all that trouble because often groundwater is of high quality having been naturally filtered, and you can find it in many places where there are few other alternative sources of water. That makes groundwater incredibly valuable especially for drinking water supply.

Once you find it, groundwater is also relatively reliable. While poor rains and drought will affect groundwater too, it’s a ready climate buffered resource that includes some built-in protection from short-term variations in weather.

If we spread out all the world’s groundwater equally, we’d have a layer that was almost 80 metres deep according to the World Water Development Report which this year focuses on groundwater. But like most things, it’s not spread out equally. And it’s not all available. On average, of all that water, only the equivalent of 27 cm in depth is replenished each year. That puts an upper limit on the water that might lie underneath you in a more or less average place on earth and be available when you needed it.

In some areas we are overexploiting water resources including groundwater, and in others we still lack the investment in technology to access it. The global champions in groundwater use are found in Asia. Eight of the ten leading countries in extracting groundwater (accounting for 75% of the total withdrawal) are located in Asia (India, China, Pakistan, Iran, Indonesia, Bangladesh, Saudi Arabia and Turkey), and the others are USA and Mexico.

Most of the drinking water supplies in countries where we focus our work at IRC are the low- and middle-income countries that are trying to close the gaps to provide water and sanitation services to everyone based on groundwater. That’s especially true outside the large cities that might treat and use surface water sources.

It’s certainly not a poor alternative to surface water. Even in some of the richest cities, like The Hague where we have an office, river water that isn’t quite clean is pushed underground to filter it, and then that groundwater is abstracted and ready to drink.

Often, we don’t have to worry about groundwater. It’s a magical resource that keeps on giving thanks to the clever hydrogeologists and well drillers that are experts in finding it and engineering ways to make it accessible. But why might we need to worry about this hidden resource a little more than we do?

One major concern is water quality. Once groundwater is polluted it is very hard to clean and loses many of its advantages. Pollutants may be naturally hidden in groundwater for example leading to arsenic poisoning in Bangladesh and fluorosis in the East African Rift Valley. Or they may be introduced by human activities. A recent Stop the Rot report flags potential concerns over the use of lead in components used to make handpumps (of which there are 700,000 in Sub-Saharan Africa alone), and even plastic pipes .

A second concern is people losing access to groundwater as their infrastructure (especially a pump) breaks down. Once a well and pump are installed, you might assume the problem of water supply is solved but management of that infrastructure, particularly the operation and maintenance, is as equally important. Lowland communities we work with in Afar, Ethiopia for example, where groundwater tends to be deep and the technologies relatively advanced, struggle to keep pumps running and government doesn’t have enough capacity and funds to support this (one study suggests we might spend five times more on maintenance).

A third concern is our ability to support large numbers of – relatively small – groundwater supplies. While we don’t yet give enough attention to the struggling voluntary committees that are likely to manage a community borehole in Sub-Saharan Africa or elsewhere, water professionals typically give even less attention to households that have developed groundwater resources themselves. These kinds of do-it-yourself supplies, known as self-supply, probably supply over 1 billion with water but they only attract recognition and professional support in richer countries. That puts people at risk, but without these supplies we can’t really seriously talk about achieving universal access to water.

In other more upland parts of Ethiopia with more rainfall, staying with that example for a moment, there are two parallel worlds for water supply. We see the same in many other countries. The do-it-yourself world where people are developing their own water supplies. A second, professional water world with a focus on community supplies and increasingly piped schemes. From 2003-2006 there was a big campaign in Ethiopia promoting rainwater harvesting and dug wells for irrigation and domestic supply. Since then, many households have carried on doing their own thing although without much support from government or development partners. Their progress is not counted in the government’s monitoring of progress.  In the other world focused on community and utility supplies the challenges of cost recovery and maintenance remain big.

So as we (re)discover groundwater this World Water Day, let's not just look under our feet and think about the resource that lies down there. But let's also think more about those different worlds and groups of people that are developing groundwater, largely hidden from each other. Getting various service delivery models to work well, whether based on groundwater supplies or not, will be the only way we can achieve SDG 6.

Photo caption: Makethewe is pumping water using her family's rope pump. Her father, Tadesse, bought the pump with the help of a small loan that he paid back within 6 months. SNNPR, Ethiopia. © Petterik Wiggers/Panos Pictures.