Flying the flag, but breaking the pump

Territorial approaches to rural water supply were a hot topic at this week's Triple-S annual meeting.

Presenting the experiences in Ghana, Vida Duti presented this nice map, showing which donors operate in which part of the country. One could interpret this map in a positive way; probably donors have come to some division of labour, all working in different parts of the country – even though some areas are quite crowded with donors, and this excludes NGOs. However, the real problem lies not so much in the presence of so many donors; but ensuring that they all follow the same – or at least similar – approaches, ones that align well with those developed by the government. 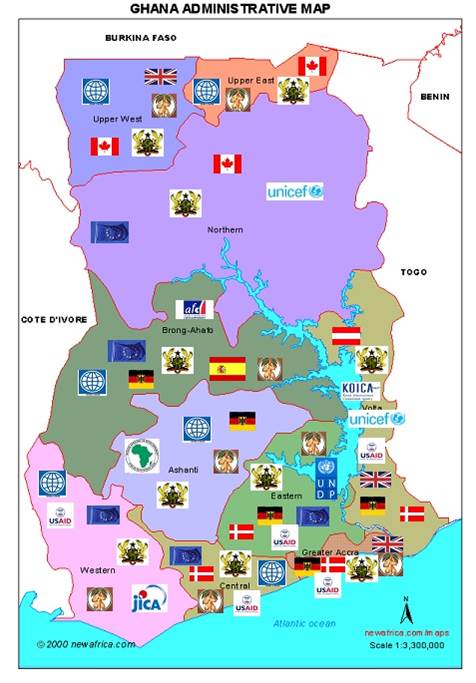 This kind of flag planting is not limited to virtual maps; on entering a village we have all seen the signboards that say things like "the water system in this village has been developed by [fill in name of donor]", handpumps with a little metal tag showing the flag of the donor country that financed it, or water committees in T-shirts bearing the name of the project that helped set up the committee. Not only external donors do this. It is also common to see commemoration plates at the storage tank with text saying something like "this water system has been developed under the administration of [fill in name of the President or mayor who was in power at the time]." 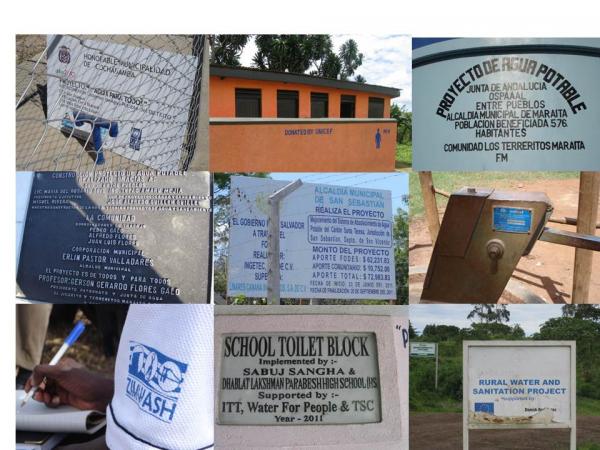 While I can understand that donors like to get some recognition and visibility for the money they contribute, it all becomes quite embarrassing when a pump is broken, or when the toilet block with the big signboard is the filthiest place in town. Not something any donor, or government, would like to have its name associated with. More problematic even is that this kind of flag-flying may give the wrong message that the pump or water system was some kind of gift and that it belongs to the donor. How often does one hear references to "the EU pump", "the mayor's water system" or "the UNICEF toilets"? In spite of all efforts to provide communities with ownership – hopefully in the legal sense of the word and not just "the sense of ownership" – this kind of flag-flying just reinforces the wrong message that it is the funder's asset. This may in fact contribute to the breakdown of pumps. I have seen many communities that are hesitating to repair the water system, as they are afraid to touch the donor's pump or the government's storage tank. Or, they may actually sit and wait for the donor to come back, expecting that the donor would do the repair or replacement of their water system.

How often does one hear references to "the EU pump", "the mayor's water system" or "the UNICEF toilets"?

It made me think on how this type of visibility is being done in my own country. And there it is always the service provider's name and logo that is on all the assets. The treatment plant in the dunes not far from my apartment in the Hague has the name of the utility that operates it, even though it may not have covered all the investments into it. I don't know the details of that treatment plant, but I wouldn't be surprised if the initial investment was partially done with national or municipal funds. There is no sign to be seen that says "this treatment plant was developed under the administration of mayor X or Prime Minister Y". 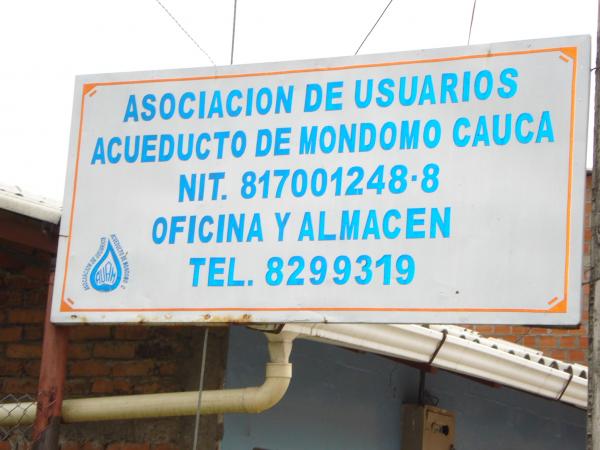 And this is how it should be. I think flag-flying could be done in a positive way, one that actually gives the message meant to be a given, and not a gift. What if the signpost at the start of the village read "the water service in this village is provided by [fill in the name of the community-based service provider]"? What if the metal plate on the handpump bore the name of the water committee maintaining it, and not of the donor that paid for its installation? What if the commemoration plate at the storage tank showed the contact details of the municipality or district office the community could go to for support or questions, rather than the name of the mayor who oversaw the construction of the tank? I think that would do much more to create a sense of ownership among the community, more pride among the water committee, and provide the real important information to the users, namely the details of its service provider and not of its infrastructure developer.

My hypothesis is that water systems with that kind of visibility perform better than the ones that provide visibility to the infrastructure developer – maybe something to test in our Triple-S research? Donors and politicians don't need to worry: there is much more pride in saying the systems that were developed under your administration or with your money are performing well, than in having your name or logo put on a broken handpump or leaking tank.