Faecal sludge management is booming but not yet at scale

700 FSM fans can't be wrong. Faecal sludge management is hot but we need to collaborate more to see the big picture. Forget pilots, think at scale! 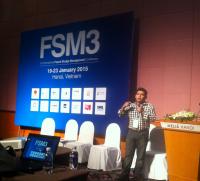 This past week (19-23 January 2015), IRC was present at the 3rd International Faecal Sludge Management (FSM3) conference in Hanoi, Vietnam. With over 700 participants from all five continents (more than 50 we were told!), the conference was a great success. IRC was present to co-present a workshop on city planning for faecal sludge management (FSM), but also to learn from other organisations, governments, businesses and universities working on this topic. To have such a large number of participants discuss for five days the safe containment, collection, transport, treatment, and reuse or disposal of faecal matter from onsite sanitation technologies is quite an achievement in itself and it shows that this topic is finally receiving its much-deserved attention.

To all in the sanitation world it is clear that the current practices to manage the sludge accumulating in pit latrines, septic tanks or other facilities which are not connected to a sewer, are leading to disease outbreaks and environmental damage. However, many are still grappling with how to deal with the multi-dimensional challenges of FSM, and especially on how to do this at the scale needed to actually make a difference. The conference therefore saw a large attendance from various sectors such as government officials, international finance institutions, donors, practitioners and researchers all trying to learn from various technologies, business and governance models of FSM to address the enormous challenges in this field.

So... how to face the faecal sludge time bomb?

We counted more than 50 presentations – not including the plenaries – on day 1 only! There were tools calculating costs for emptying, one in informal communities which showed that transportation costs for pit emptying were not covered by fuel revenues, by Rachel Sklar, Pivot and an economic model of the costs of emptying by Ruth Cottingham. Service models for FSM used in Maputo, Mozambique. There were sessions focusing on India mentioning the need for a change in mind-set: from centralised sewer approach to non-sewer sanitation chain approach. Vietnam was of course covered with a regular time schedule and a finance option for septic tank emptying by adding 10% to the existing wastewater tariff and the remaining costs come the city’s budget. Finance came up a couple of times. ´We have to rethink public finance for sanitation. It is not a technical problem, but governance failure’, said Hubert Jenny, Asian Development Bank. Many sessions on treatment and composting, such as the action research by our partner BRAC WASH in Bangladesh. 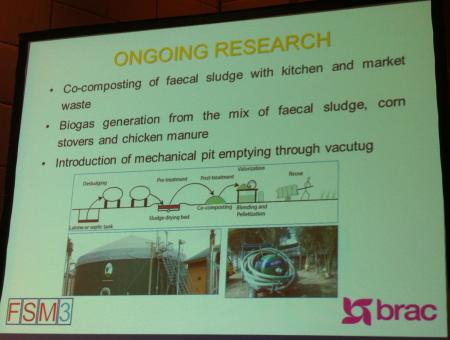 There were also presentations on technologies started under the reinventing the toilet initiative and a call to join the South African Sanitation technology Demonstration programme in which some of these technologies are going to be tested in the real world.

Despite the large attendance, the variety of represented sectors and countries and the overall positive vibe there are still crucial elements missing from this conference, which stand for some of the key challenges that the sector is currently facing.

First and foremost, is the fact that there is a serious lack of collaboration between the different sector specialists. Too many scientists seemed to conduct isolated research, while think-tanks come with handy tools and others yet again with a business model. All these elements are certainly needed, but if carried out with no relation to each other, they become an end in itself and therefore useless. This aspect was clearly reflected by the three different types of presentations: institutional – holistic; research on FSM aspects and a more technical/business angle. These were taking place in parallel sessions, in separate rooms and attended by a public that was not tempted to mix.

A second related issue of importance is that much work and research going on in FSM is largely occurring without a biggerr vision in mind. It is our belief that to truly make a difference, national governments and municipalities need to create a long-term vision and place various tools, experiments and research activities under this banner. Habib Chowdhury from Dhaka Water and Sanitation Association (DWASA) in Bangladesh for example mentioned in his presentation that the roles of various agencies remain unclear and that there is no available model that can be scaled up.

This brings us to the third point of importance, being the issue of scale. Almud Weitz made that very clear: “Has the tide turned on faecal sludge management? Not yet.” She stressed that sustainability needs a focus on the whole chain; forget pilots, think city-wide and national scale!  Despite being often mentioned as a key concern, very few presenting organisations were able to show how they plan and act by keeping scale in mind from the very start of their intervention.

These gaps are not necessarily a reason to be worried about the future. Many share these concerns, but as this sector is slowly emerging, readymade solutions are just not yet available. It takes cities about ten years to develop FSM services, said Gates Foundation's Brian Arbogast in his concluding remarks. 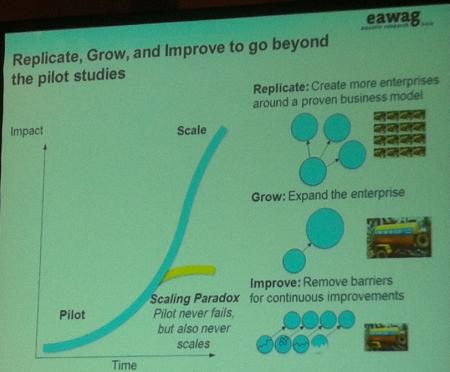 If anything, the value of a conference is that one cannot avoid people from other sectors, and it is out of this forced interaction that interesting partnerships emerge. The enthusiasm of the participants makes us sincerely hopeful that these partnerships will be able to tackle one of the most important underlying factors leading to poor health and environmental problems around the world. The take-away-ask from Brian Arbogast: What role will you play to make it happen?

By Ingeborg Krukkert and Giacomo Galli